Sustainability Costs and Profits: Birth of a Transversal Culture of Diverse Languages 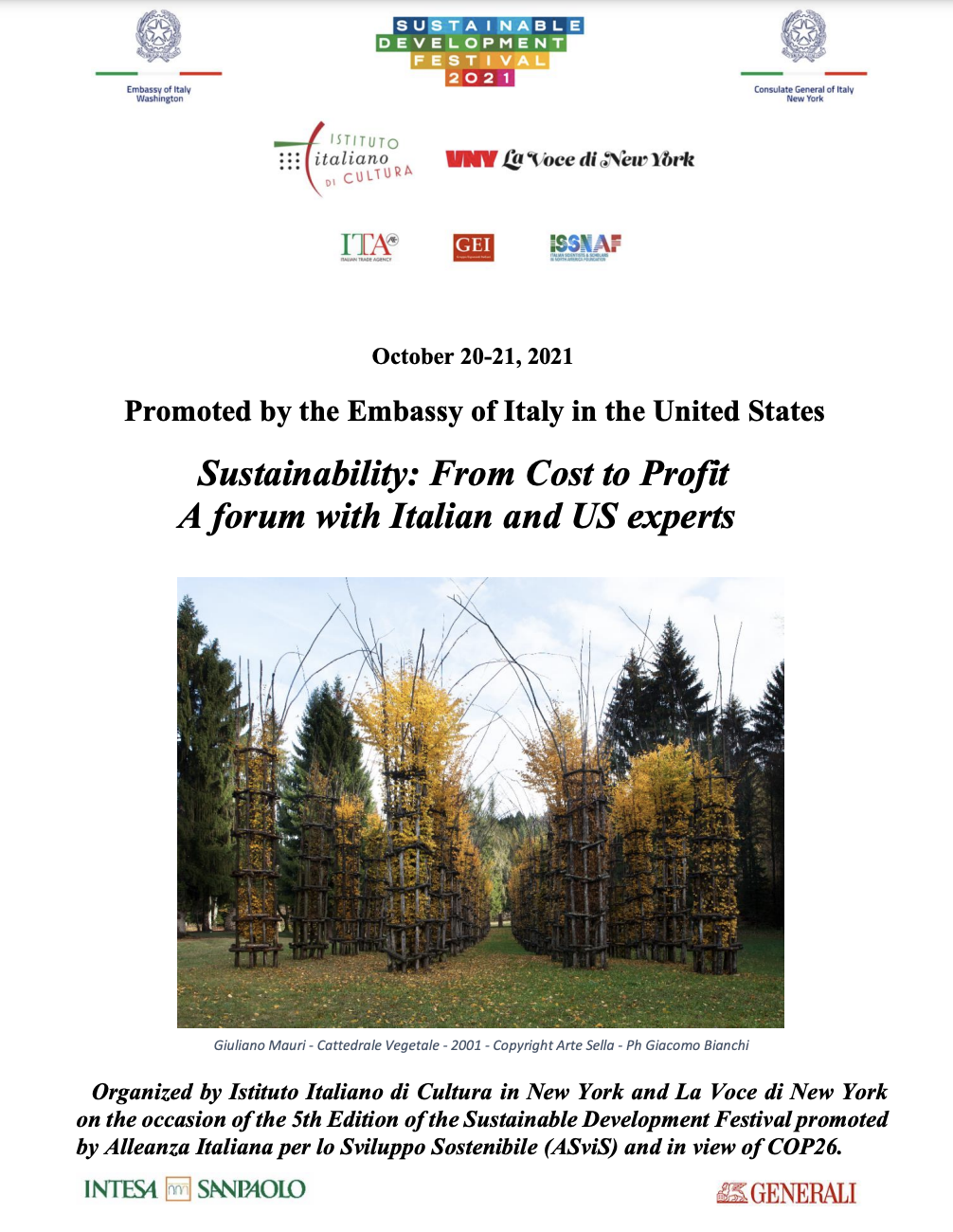 Hurray, everyone wants to be sustainable. But is sustainability sustainable? This is the debate that ignites spirits. Years ago, those who used to eat organic, dress in recycled fashion, travel by bicycle (not electric!), were mocked with: “but you’re rich, that’s why you can be sustainable! If the entire world was to eat like you do, we’d all starve to death, and if we wanted to follow your guidelines on air quality, we’d have to stop breathing.”

Well, today we have discovered that this approach to the subject is not the only one possible. Sustainability is heading towards what may become the largest business in the next years to come.

A Forum dedicated to this transformation called SUSTAINABILITY: From Cost to Profit, will take place in New York on October 20th and 21st under the auspices of the Italian Embassy in Washington.

The Forum is being organized by the Italian Cultural Institute in New York in collaboration with La Voce di New York, and with the strong support of Consul General Fabrizio Di Michele, and will be held at the prestigious (and closely located) Council on Foreign Relations (58 E 68th St.) and the Italian Cultural Institute (686 Park Avenue), and will be transmitted live on the following YouTube channels:

Il will then be relaunched on the Italian Cultural Institute’s new website (along with subtitles for the sessions held in Italian): https://www.stanzeitaliane.it/

The participants are exceptional figures. Consecrated by the greetings from the Italian Ambassador to the United States, Mariangela Zappia (the first woman in this role), the Forum counts among its speakers Richard Haas and Tensie Whelan, Alessandro Benetton and Federico Rampini,

We asked the director of the Italian Cultural Institute,  Fabio Finotti, “How come prominent figures coming from such diverse areas are participating, and why is there such a strong involvement on the part of the Institute in an area that seems to be more economic-financial as well as cultural?”

His response was clear: “The culture of sustainability is a transversal one which intersects diverse languages; not only the language of economics and finance, but that of society, art, fashion, the culinary arts.

Sustainability means a certain way of producing fabrics, of creating relationships in the workplace (gender relationships, for example), or cooking. The Cultural Institute is the crossroad of these diverse languages that have, however, a single objective.

It is fundamental, moreover, to understand that culture and research are produced and promoted by the universities, academies, museums; by research centers large and small, but also by the businesses that are the fundamental engine, not only for the economy, but also for Italian culture. Some of our major entrepreneurs are also poets, just as some of our great poets are also entrepreneurs.”

Who are you referring to?

“Renzo Rosso, for example, for the entrepreneurs. Or in the field of humanities, Emanuele Montibeller and Carlo Paolini, always attentive to the relationship between economy and community.”

We asked Fabio Finotti, “who made the greatest contribution to the organization of this Forum?”. He replied, “The Embassy, which enforced the subject of sustainability, and the Consulate, as well as the work accomplished by La Voce di New York which has been fundamental, and which was in constant coordination with the Institute. We must also thank Mario Platero and Gei , who were instrumental in the relationship with the speakers. But there are names that were foundational in creating this very beautiful mosaic of participation: from Alessandro Melis, the last curator of the Italian Pavilion of the Biennale d’Architettura, to Laura La Posta of Sole 24 Ore, and to Cinzia Zuffada of ISSNAF. This Forum really aims at establishing itself as the model of what is called ‘integrated promotion’,  which offers visibility to the circularity, strength and wealth of perspectives belonging to the ‘Italy system’.”

You can find the Forum program here: SUSTAINABILITY: FROM COST TO PROFIT