The Knowledgeable Garden of Professor Gembillo

In the sunny Sicily of August, the art of entrepreneurship expands in a particular space called 'garden'...

Gardens crossed by paths that branch off and intersect dot the art of entrepreneurship. Located in the Sicilian Piraino, a medieval village in the province of Messina, there is the garden of Giuseppe Gembillo, former professor of history and philosophy of complexity and science at the University of Messina. Gembillo has designed a garden that is an event in continuous evolution. On the hill, a window overlooking the sea and the Aeolian Islands, the garden receives the breath of Aeolus, the god of the winds bringing as a gift the charm of myths. Gembillo learned the arts of knowing how to do, think, imagine and understand from Piracmone (whence the name Piraino), the cyclops who worked iron, designed lightning strikes and built walls. The four types of knowledge are essences of the flower of “knowledge of knowledge” – namely, the knowledge that reflects on itself. Named after Edgar Morin, philosopher and sociologist of transdisciplinarity, that flower is cultivated in the garden and displayed in Messina at the “Edgar Morin International Centre for the Study of the Philosophy of Complexity”, directed by Gembillo. 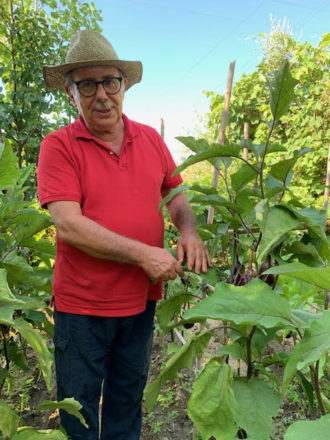 With the muscles of hand-working intimately connected to the power of thinking head, his son Fabio Gembillo, also a scholar of philosophy, contributes to the care of the garden. For the Gembillos, the garden is an inspiring demon. Their words express concern for the garden, leveraging on intelligibility and intelligence. They understand how to reap fruits in the succession of seasons and ensure its existence without stressing the earth to get more benefits in the short term. In the Gembillian garden, the Horatian carpe diem regains its original meaning. It is not a question of grasping what can be obtained instantly, as time is a scarce resource. Nor does one want one’s happiness by harming the community. The horticultural metaphor recovers the profound meaning of Horace’s words: to sink the body and mind into the roots of nature’s time. A long and deep breath that rewards as much oneself as others.

The intellectual capacity of the two horticulturists allows the plants to communicate, to trace complementarity and circularity between the many antagonisms of the variety of species present in the garden. In short, to keep together what is divided, thus avoiding the barbarity of specialization that creates a rigid artificial order. It is intelligence that incessantly regenerates the garden, keeps it awake without letting it fall into sleep and into the dreams of reason that does not admit to being questioned.

We are used to observing business creation from the perspective of the orthodox rationalists of innovation for entrepreneurial purposes. They are responsible for incubators, accelerators, co-working workspaces and other artefacts of cohabitation of companies in the making. The Gembillian garden is a compelling vision of discontinuity. Classic innovation is similar to jam spread out along the uniform courses of artefacts. The à-la Gembillo gardens show a variety of grains of grapes harvested by crossing the various paths of transdisciplinarity and complexity of innovation. The artefacts at the service of entrepreneurial innovation put to work the pre-defined competences of experts in the creation of businesses according to agreed canons of behaviour. The Gembillian garden is both a living organism and a metaphor for the art of entrepreneurship to conduct experiments in the cultivation of new entrepreneurial species.

Grown in the Gembillo’s garden, vegetables and fruits change into words and voices of innovation during the festival of complexity that takes place annually during August in Piraino at the house of the professor. There, the art of entrepreneurship joins the art of conversation whose culture of imagination in the uncertainty surrounding explorations of novelties has been the spark both of the Enlightenment and the Industrial Revolution.