Elena Ferrante’s “Smarginatura” and the Identity of Women

Interview with Grace Russo Bullaro, co-author of "The Works of Elena Ferrante. Reconfiguring the Margins" 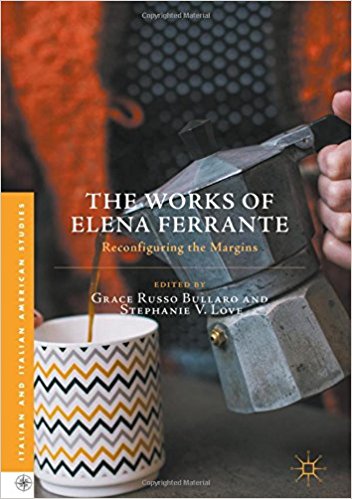 The Works of Elena Ferrante. Reconfiguring the Margins (Palgrave Macmillan, Dec. 2016), edited by Grace Russo Bullaro and Stephanie V. Love, is a book entirely dedicated to Elena Ferrante, and the first ever written in the academic world.  It is a very ambitious project that analyzes the monumental work of Elena Ferrante in detail. Professor Russo Bullaro and her team of scholars explore it through multiple points of view:  linguistic, historical and literary.

A Ferrante Fever has spread all around the States, and it is echoed in Italy, the author’s native country. Ferrante was already famous there, but also often criticized by academics and readers.

Professor Russo Bullaro intentionally does not address the question of Elena Ferrante’s “true identity” in her analysis, an issue that she and Love consider to be of little importance and that only distracts readers from the writing of the author.

I met Grace Russo Bullaro in her office at Lehman College, the City University of New York in the Bronx. We talked about Ferrante and the book she edited with Stephanie Love. She told me, and also the readers of La Voce di New York,  about the birth of the idea for their book, and their decision to focus on the theme of  smarginatura. Smarginatura is how Ferrante and her characters break “margins” of all kinds: historical and literary, as well as the margins in relationships.

Why a book about Ferrante?

“We could say that the book was born out of my ‘love’ for Elena Ferrante. But if this is love, then it’s a troubled love, not an easy one. It often happens that projects are born out of an idea that disturbs and needles you, and the only way to get rid of that underlying unease is to figure out the reasons for that reaction. Ferrante is the kind of author that leaves a mark on you. She slaps you in the face, making you rethink everything about your relationship with other women, with your mother, with your daughter, with your friends. And her storytelling is magnificent. The more you read, the more you’re drawn in. You want to know what happens to Elena and Lila, the little mystery that goes along with Lila. The reader knows right away that it’s going to take a long time to tell you that story, but it will be worth the time.”

When did you decide to write the book?

“One day I was chatting with a young colleague of mine, a graduate student at CUNY Graduate School, Stephanie Love, whom I had met at Oxford University a while before that, and who had contributed an essay to my previous work, Shifting and Shaping a National Identity. I mentioned that I was reading Ferrante, and she told me that she was too. We started talking passionately about the writer. At that point I had already invited Stephanie to collaborate on my next project and we were discussing various possible topics. All of a sudden we realized that a volume on Ferrante would be a great project.”

The term “smarginatura” seems to be very relevant since it is also part of the title of your book, “Reconfiguring the margins.” What does it mean?

“‘Smarginatura’ is a concept that is associated with Ferrante’s novels. In the storyline it’s a physical phenomenon that Lila experiences a number of times in her life, where she feels that she is losing her solid outlines, she is in a way, blurring her boundaries and melting into her surroundings—metaphorically losing her identity. On the literary level it means that the author bursts through discursive boundaries. In other words, Ferrante doesn’t accept the margins that society places around the concepts of identity, female roles in society, the sacredness of motherhood. Stephanie and I decided to approach the whole project from the angle of “smarginatura” and to look at the ways in which Ferrante not only blurs the boundaries, but she breaks them. We agreed that we had to go beyond the topic of women’s relationships, which at the time seemed to be pretty much the only theme that had been written about in Ferrante, and aim for a much larger scope.”

The first part of the book focuses on history. Why is Ferrante necessary for exploring history, especially Italian history?

“Authors don’t just tell a story, they create a whole world. To understand Ferrante’s protagonists you have to understand the world they live in. She’s not only inventing a story about Elena and Lila, she’s re-creating Italy and how the country changed from the end of WWII to the present day. The story of Lila and Elena is the story of Italy—it’s the story of ‘us’.”

Who is more critical of Ferrante in Italy, academics or readers?

“Hard to say, male critics in Italy have said some outrageous things about Ferrante—for example, that she should ‘go tidy up a male rival’s apartment,’  implying that women should stay out of literature. But I’ve also noticed that some readers, especially some born in Italy and living in the US, object to what they see as an unjustified focus on criminality and poverty in Ferrante’s novels. Perhaps they feel that she is denigrating a part of their lives, that a nation’s ‘dirty laundry’ shouldn’t be washed in public.”

Why does it seem that Ferrante is more famous here than in Italy? 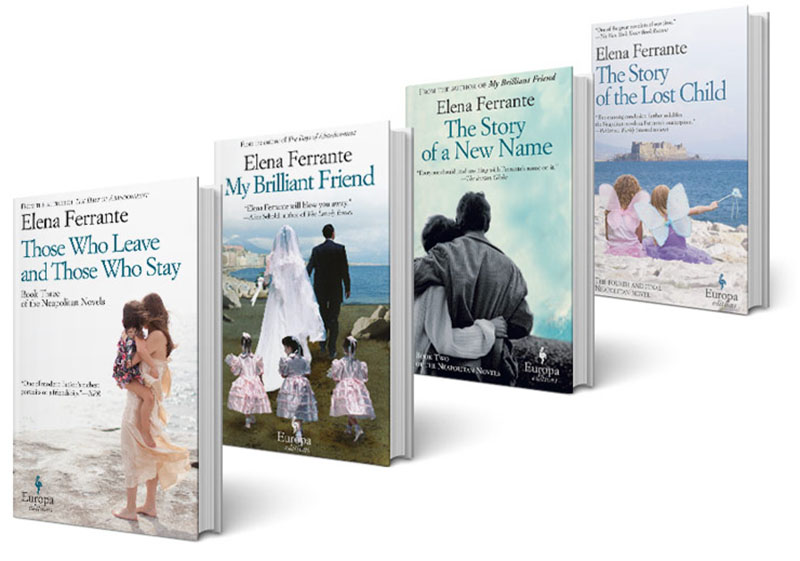 “Ironically when Ferrante’s popularity exploded in the Anglophone world, she drew more attention in her own country—not all of it positive, as we have seen. In the States she is seen as an ‘Italian author’ who tells a captivating story. In Italy her American celebrity is still a puzzle to many. This is not unprecedented. Italy has a history of mixed feelings towards Italian authors that achieve fame in other countries. It’s not unusual for Italians to not recognize or appreciate their own artists until somebody else notices them first. To be reductive about it, let’s say that Americans and Italians have different ideas about what constitures ‘great literature’.”

What approaches did you take in your book?

“In Part I we took a historical approach for the reasons explained before. We looked at the effects of the ‘economic miracle,’ the changes that occurred in education, and the impact of television on post-WWII Italian society. In Part II we focused on issues of ‘stylistics and poetics’. And in Part III we examined the ‘signature themes’ associated with Ferrante, those dealing with the many dimensions of a woman’s world, dealt with through the lens of literary analysis, psychoanalytic and feminist theory.”

One of the issues you examine is the “questione della lingua.” How does language matter in Ferrante’s work?

“Most people think that Ferrante’s work is full of Neapolitan dialect, but when you look closely, there is very little actual use of it. There is instead a lot of indirect paraphrasing of Neapolitan dialect. In our volume we examine some of the possible reasons that may have influenced Ferrante in this decision. In any case, whether verbatim or paraphrased, the use of dialect in Ferrante’s work is extremely important. It functions as a ‘social marker’ and aids in tracking socio-economic and cultural uplift, especially in the post-WWII period. In 1945 the use of dialect marked you as a social inferior. In the 80s and 90s that situation became vastly different. Today young people have re-appropriated dialect as part of their cultural patrimony. Like all language, dialect is a living thing.”

In your volume you decided not to focus on the mystery surrounding “Elena Ferrante’s” true identity (In 2016, Journalist Claudio Gatti discovered her identity: Anita Raja). Why is that?

“I firmly believe that the question of Ferrante’s anonymity and all the speculation about her true identity serves as a distraction from her work. A writer does not owe us a glimpse into her personal life, only her literary productions. As she herself has stated in the past through ‘anonymous interviews,’ loosely paraphrased,   ‘I’ve done enough, I’ve written the books’. In her opinion, the rest does not concern her.”

Should Ferrante be included in the syllabus of Italian studies?

“Of course she should! Her books should feature prominently in literature courses offered in Italian departments, not only because of her high visibility but because as an author and social critic she has a lot to say. Her books challenge the status quo.

I teach many Women’s Studies courses, but in the English Department. If there were more interest in Italian literature among our students, I would certainly add her work to my reading lists. On the other hand, adding her to a curriculum in Women’s Studies would underscore another thorny issue associated with her work: the ghettoization of her work as ‘women’s lit’. Many critics have called her novels ‘glorified chick-lit’. And that’s not a good thing.”

How do you see the future for Ferrante?

“We don’t know yet if her literature is going to endure or gradually fade out of prominence. What gives me pause for thought is that her popularity was too sudden, the spike too high. Usually that signals fad, not substance. Who knows? We’ll have to wait and see.”

What makes Ferrante different and distinctive from other contemporary Italian writers?

“The fact that she is fearless in saying the things that people don’t want to hear. For instance, in Ibsen’s classic play, A Doll’s House, we see that Nora leaves her husband and children in order to achieve her own ‘self-fulfillment’. That play was staged in 1879 and it created a scandal. Today, in the XXI century, we’re still dealing with some of the same issues: the conflicts existing for a woman in her roles as mother, wife, lover, career person. In fact many parallels have been drawn between Nora and Elena Greco, the protagonist of the Neapolitan Quartet. Ferrante creates characters that kick against society’s expectations and restrictions. She doesn’t care about being ‘liked’. She tells the truth as she sees it.”

Why is Ferrante so disturbing?

“Think about the relationship between Elena and Lila: it’s a love-hate relationship. They try to destroy each other, physically, metaphorically and even metaphysically, yet they are best friends. Readers frequently complain that there are no sympathetic characters in Ferrante’s novels. Can you think of one character that you actually like in her novels? (I think about it for a while, and then we both laugh.) In my view we don’t read novels to find a new best friend, but to reevaluate important issues, gain new insights about life. Impactful literature should be disturbing, take you out of your comfort zone. That’s the power of Ferrante’s fiction.”