Paolo Cognetti, in the Footsteps of American Authors: Dreaming of the Great North

Strega Prize winner comes out with a documentary about his journey from the Alps to Alaska, following the legacy of the great American writers

Paolo Cognetti, winner of the Strega Prize, and protagonist of the documentary "Sogni di Grande Nord" 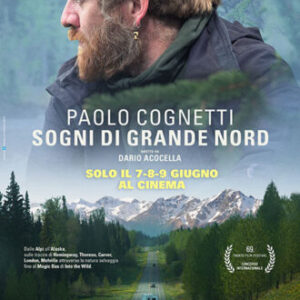 When it comes to America, literature, mountains and traveling, Paolo Cognetti is always the interpreter of intense and inspired stories. Winner in 2017 of the Strega Prize with the novel “The Eight Mountains”, translated in forty countries, the writer born in Milan gets back to his favorite themes in the documentary “Paolo Cognetti. Dreams of the Great North”, directed by Dario Acocella.

The movie, produced by Samarcanda Film with Feltrinelli Real Cinema, Rai Cinema and supported by the Film Commission Valle d’Aosta, premiered at the 69th Trento Film Festival, the important international festival dedicated to mountain movies, and then broadcast on June 7th, 8th, and 9th, distributed by Nexo Digital.

Cognetti, with his illustrator friend Nicola Magrin, in 2019 took a dream journey from the Alps to Alaska, in the footsteps of great American authors. Besides Hemingway, London, Thoreau and Melville, the writer pays a special tribute to Raymond Carver visiting his grave in Port Angeles, Washington, during one of many inspired scenes of the documentary .

“If I am a writer or if I dreamed one day to become one, I owe it to the master who is buried up here.” With the authors who influenced and guided him, Cognetti then dedicates a special memory to Chris McCandless, concluding the journey at the famous Magic Bus where the protagonist of “Into The Wild” took refuge in his last days.

The old abandoned bus, a pilgrimage destination for years, was removed in the summer of 2020 for safety reasons. Cognetti and Magrin were among the last to be able to visit.

This highlights the elephant in the room while watching the documentary, that is the nostalgia felt watching a journey that took place before the pandemic, a tribute to a freedom that has been severely compromised for over a year. The melancholy hovering around the viewer, however, does not diminish the fascination exerted by the itinerary. On the contrary, Cognetti becomes the discreet but powerful guide who inspires us to recover the enthusiasm, to dedicate ourselves to old and new dreams.

In addition to the journey through the spectacular landscapes of the Great North, the documentary also talks about the less visible journeys that the writer has made within himself. One of the most effective passages in the movie is the one that focuses on the relationships between Cognetti, writing and success.

After having pursued the dream of becoming a writer for years, driven by the frustration of being unseen, full of unrecognized sensitivity, around the age of thirty he went through a personal crisis that he faced thanks to “Into the Wild”, obtaining the inspiration to move to a cabin in Val D’Aosta where he still lives six months of the year.

“I didn’t go to the mountains to become a famous writer or to be admired. Probably,  I went to the mountains because of the anger for not being seen, loved, for not having a job. So, the fact that after all this becomes the reason for your success or a reason for admiration is very beautiful and rewarding but also absurd.”

Cognetti never sounds like a guru, neither do the ones he came across during the journey. The meetings with Gianni and Magì, old friends of Nicola Magrin’s parents who have lived in the Canadian woods for forty years, or with the writer Kate Harris, also isolated in the mountains, reaffirm the questions rather than impose answers.

The documentary itself bravely listens to the silence, without worrying about interrupting or filling it.

The result is a sincere story, without posturing or artificial moments, that allows one to almost forget that Cognetti and Magrin were followed by a crew.

The arrival at the Magic Bus is real and touching and marks the natural and powerful conclusion of a journey inside and outside oneself which confirms Paolo Cognetti’s ability to share and transmit his love for America, for its stories, its conflicts and its dreams.