One of Letizia Battaglia's photos in Palermo for the Lamborghini publicity campaign.

Automobili Lamborghini, the Italian luxury car manufacturer, today completely owned by the German company Audi, proudly announced its new advertising campaign, “With Italy, For Italy – 21 Views for a New Drive”, in order to actively contribute to “reinvigorating the country’s image and send a positive signal of rebirth” in the period of the Covid-19 emergency, with the idea of highlighting the ethos and uniqueness of the country’s 20 regions.

“This is our act of love and gratitude for our country,” said Katia Bassi, Chief Marketing & Communication Officer of Automobili Lamborghini. “This is an initiative embodying the synthesis of quality, excellence, and values that only Italy is capable of encapsulating.”  Bassi added that, “social responsibility is an integral part of our business approach. We proved it during the emergency phase when we converted our production to manufacture masks and protective face screens, and we’re doing the same now, by highlighting the unique and extraordinary treasures that Italy can proudly boast of.”

The House of Sant’Agata Bolognese summoned twenty of the greatest talents in Italian photography to realize the project called “Twenty Photographers For Twenty Regions.” and asked them to interpret the ethos, uniqueness and excellence of the 20 Italian regions together with 20 Lamborghinis. This elite group was joined by a special invitee, Letizia Battaglia, one of Italy’s greatest news photographers, famous for her pictures of the mafia and the Sicilian life in the 1970s and ’80s. Now 85, she was entrusted with a special interpretation of her home city, Palermo.

Beginning on September 7th, all of the photographs were published on Lamborghini’s Facebook page. Every day the company posted a group of photos from one of Italy’s regions featuring one of its famous automobiles.

On November 17th, Lamborghini published a series of posts using photos by Letizia Battaglia, featuring a yellow Aventador SVJ and two young girls, in several locations in the city of Palermo. 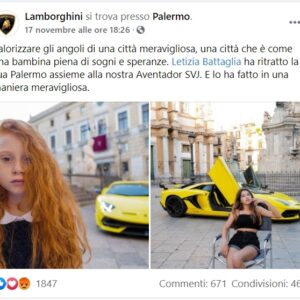 Posted by Lamborghini on Tuesday, November 17, 2020

A city that is like a little girl, full of hopes and dreams. A soul-touching place. That’s the way the great photographer Letizia Battaglia portrayed the streets of Palermo with our Aventador SVJ. #Lamborghini #AventadorSVJ #WithItalyForItaly #Sicily#Sicilia #Palermo pic.twitter.com/v5Ae0m6Hlc

17/11/2020 · Letizia Battaglia ha ritratto la sua Palermo assieme alla nostra Aventador SVJ. E lo ha fatto in una maniera meravigliosa. Valuing the corners of a wonderful city, a city that is like a little girl full of dreams and hopes. @[100044294086395:2048:Letizia Battaglia] portrayed his Palermo together with our Aventador SVJ.

17/11/2020 · Every little corner of Palermo has its own importance. It tells the story of a city that is like a little girl, full of hopes and dreams. The photos Letizia Battaglia captured with our Aventador SVJ are a representation of life in its deepest facets. 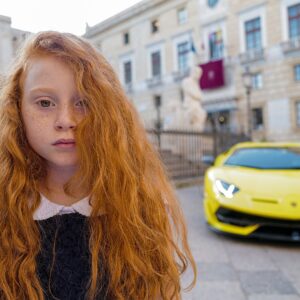 The photos by Letizia Battaglia caused an uproar. A flurry of outraged comments posted on Facebook were followed by a statement from the Italian Art Directors Club (ADCI), that comprises most of the country’s best professionals in the fields of advertising and communications. “It is most likely that the photographer had in mind a particular image of the city of Palermo like a little girl,” said Vicky Gitto, the President of ADCI, “and she didn’t notice that the results didn’t match her expectations.”

These photos, adds Gitto, “are like postcards that instead of enhancing views of Palermo, take possession of the city with arrogance, with a super car that notwithstanding its aspects of excellence, like the history of the brand, its design, its advanced technology, has an invasive presence among aspects of daily life in Palermo, while portraying one the most tired clichés of advertising: beautiful women, fast cars and money.” The problem here, says Gitto, is that “the women are little girls.”

The mayor of Palermo, Leoluca Orlando, posted the following statement on Facebook: “FOR OBVIOUS REASONS THIS POST HAS NO PHOTOS. ‘The city of Palermo has not authorized Lamborghini’s ad campaign presently on social media that conveys a message that we cannot share. Therefore, I ask the company to suspend it. The manufacturer had presented a request to realize a great photographic project with cultural and social values to celebrate the beauties of Italy, enhancing their qualities and identities, but we were never given the details that we discovered only yesterday, after the beginning of the campaign. Aside from any judgment regarding artistic expression, this administration has always opposed the use of the female body, more so those of little girls, in commercial messages and advertising. This has nothing to do with art and its representations, that we have no intention to judge, all the more in the case of a work by Letizia Battaglia, whom we have greatly appreciated with regards to her past and present achievements.” 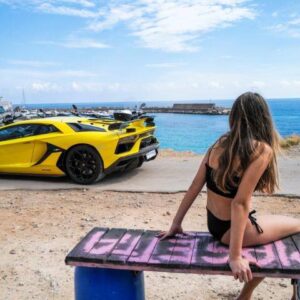 Lamborghini responded to its critics with a statement sent to PalermoToday: “These photographs by Letizia Battaglia are part of our project ‘With Italy, for Italy’, that is a declaration of love by Lamborghini for its country, with the intention of providing support for a renewal in a difficult moment like the present one. We particularly wanted Letizia Battaglia on the team of 21 Italian photographers because we share her values and the sense of responsibility she has always shown in her works. When we decided to invite her, we were well aware of the strength and the impact of her photographs, in consideration of her long career during which she covered news events and delicate subjects.”

Shortly after, Lamborghini cancelled the posts with Battaglia’s photographs that were ruthlessly critiqued by Carlo Ramo on the Mattino di Sicilia.

“Letizia Battaglia has never been a car enthusiast (I don’t think she has a driver’s license) and has never been used to shooting ‘posed’ portraits, landscape or color photography. And it shows.”

Personally, I find these photos dull and very ordinary. If they’d been shot by an unknown photographer no one would have ever published them. Evidently, in the chaotic times in which we live, the quality of the work no longer matters, all that counts is the name of the author. And what is even more absurd is that a woman who has always been ‘anti-system’ as she has, has agreed to participate in this marketing scheme.

Clearly, this appears to be a case that agrees with the following statement written by Oscar Wilde in his The Picture of Dorian Grey: ‘There is only one thing in the world worse than being talked about, and that is not being talked about.’”
And Ramo continues: “Hopefully no one will try to tell us that these photos enhance the city of Palermo.” And he adds, “My only hope is that the young girls who had their image exploited for commercial reasons received adequate compensation.” 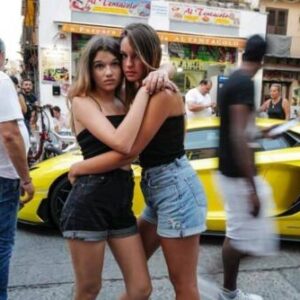 Commenting on Facebook, Francesco Carlo doesn’t mince his words: “When will you realize that some photographers who are extremely successful in their particular fields might not be able to obtain the same results in other fields? It’s not enough to hire a big name to get good photographs.”
Having begun my journalistic career as a news photographer for the Paris-based agency Sygma, and having worked in this capacity for many important media, I feel qualified to say that this time Letizia Battaglia did not live up to her fame. Aside from the fact that anyone could have shot the same kind of boring photos, pairing the little girls with a Lamborghini – even if one doesn’t consider it to be in bad taste – has no connection with the slogan “With Italy, for Italy.”

Quoting Fantozzi, the best known character played by Italian comedian Paolo Villaggio in the film Il secondo tragico Fantozzi, about Sergej Michajlovič Eisenstein’s The Battleship Potemkin, one could say that these photos are “a piece of shit.”
In consideration that anyone can make a mistake or sometimes fail to realize their potential – it’s sufficient to consider the terrible short film recently made by director Gabriele Muccino for the region of Calabria that was an unmitigated flop – it’s true that even if Letizia Battaglia were never to shoot another picture, we could always remember her for her fantastic black and white photographs of Palermo and the fight against the Mafia.

But please spare us any more bullshit about these photos for Lamborghini.

Wolfgang Achtner, nato e cresciuto a New York, da molti anni residente a Roma, è un giornalista freelance e regista di documentari. Dall'Italia ha lavorato per la ABC News, CNN, Press TV, The Independent & The Independent on Sunday. Wolfgang Achtner, a New Yorker, lives in Rome. He is a correspondent, television producer, documentary filmmaker, author and journalism educator. Television experience is the result of almost thirty years work for some of the most important American and foreign television networks, including eight years as freelance correspondent for CNN and eleven years as reporter/producer for ABC News. For several years he worked as a correspondent from Italy for The Independent and The Independent on Sunday and he contributed articles to Italian periodicals, including La Repubblica, Il Mondo, Mondo Economico, Il Manifesto, Reporter.

Chazz Palminteri Returns to the Theatre: “I’m Still That Kid From the Bronx”