Young local journalists like Sasha, who was killed in Gorenka, act as translators, producers and local guides to make sure veteran journalists get the story right

"Sasha" helping a journalist get the story right. Photo: Courtesy of Fox News.

Earlier this week, in Ukraine, three journalists, including a filmmaker, a producer and a Fox News cameraman were killed while covering the Russian invasion.

Fox News cameraperson Pierre Zakrzewski, 55, and Ukrainian producer and fixer Oleksandra “Sasha” Kuvshynova, 24, were both killed in Gorenka, outside Kyiv, in a shelling on Monday, according to the United Nations Educational, Scientific and Cultural Organization (UNESCO). Pierre was a veteran who had distinguished himself as an excellent journalist and a wonderful human being.

I’m especially touched by the death of Sasha, a conscientious and eager journalist and a beautiful young woman who didn’t hesitate to put her life on the line for a profession she loved and to let the world know what was happening to her country.

As a veteran of this business that I love, I want to underline that whenever news breaks around the world, young, competent and passionate local journalists who are known as producers, consultants, or fixers, are an essential and indispensable part of any news team. I like the old professional term, “fixer,” because there is something magical to it.

Thanks to our fixers who translate, act as guides, share their contacts so we can get a feel of the story and share their knowledge, and have the courage to argue to make a point and ensure we get the story right, we can do what we do and have a chance to assemble reports that bring into the living rooms of millions of people the stories and the truth about what is happening in some previously unknown to us corner of the world.

Kuvshynova was working with Fox News as a consultant, the network confirmed. “She was incredibly talented and spent weeks working directly with our entire team there, operating around the clock to make sure the world knew what was happening in her country,” Suzanne Scott, CEO of Fox News Media, said in a statement Tuesday.

Yonat Friling, a senior field producer who covers Israel and the Middle East for Fox News, tweeted a message in Kuvshinova’s memory. “In yesterday’s attack near Kyiv, we have lost a beautiful, brave woman – Oleksandra Kuvshinova – Sasha. She loved music, and she was funny and kind,” Friling continued. “She was 24 years old. She worked with our team for the past month and did a brilliant job. May her memory be a blessing.” 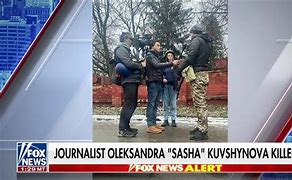 Clarissa Ward, CNN Chief International Correspondent and currently in Ukraine, made the following comment on her Facebook page: “I sadly never met 24 year old producer, Sasha Kuvsynova who was also killed in this brutal attack. Her death is devastating. A young, talented and incredibly brave woman working so hard to tell the stories of this war, to make the unimaginable real. I cannot conceive of the courage and poise it takes to do this job when it is your country at war, your people being killed and displaced, your family’s lives at risk. I am in awe of Sasha and my incredible colleagues Atshch and Olha and Denis and Vika and all the Ukrainian journalists covering this ugly, senseless war.”

In moments like this we need to shout out to the world that we are deeply grateful to Sasha and all of her Ukrainian colleagues who play a key role in our news coverage and risk their lives so we can get and deliver our stories and let the world know what is happening in their country.

I send my heartfelt condolences to the families of Pierre and Sasha!

Wolfgang Achtner, nato e cresciuto a New York, da molti anni residente a Roma, è un giornalista freelance e regista di documentari. Dall'Italia ha lavorato per la ABC News, CNN, Press TV, The Independent & The Independent on Sunday. Wolfgang Achtner, a New Yorker, lives in Rome. He is a correspondent, television producer, documentary filmmaker, author and journalism educator. Television experience is the result of almost thirty years work for some of the most important American and foreign television networks, including eight years as freelance correspondent for CNN and eleven years as reporter/producer for ABC News. For several years he worked as a correspondent from Italy for The Independent and The Independent on Sunday and he contributed articles to Italian periodicals, including La Repubblica, Il Mondo, Mondo Economico, Il Manifesto, Reporter.