Dreaming of the Future in Queens: The New York World’s Fairs

Universal Exhibitions and World’s Fairs of the 19th and 20th century have long been a subject of study and fascination for me, so having the chance to live in New York for a few months for my CIMA fellowship I was obviously eager to explore and study the New York expositions at the very spot where they happened. The places to start were at the Queens Museum and the New York Public Library. Both places have tremendous collections and archives.

But there are also interesting temporary initiatives, such as the photographic show Persuasive Images: Architecture and the 1939–40 and 1964–65 New York World’s Fairs, opening now at the Godwin-Ternbach Museum at Queens College, in which over one hundred photographs will be on view until July 27.

Both New York Fairs, planned within the great tradition of 19th century Universal Exhibitions / Expositions UniversellesÔÇòthe first of which was the very famous Great Exhibition of the Works of Industry of all Nations held in London in 1851 to celebrate free trade and an enthusiasm for Progress and ModernityÔÇòhad a powerful imaginative and visionary strength. Their historical antecedent was the 1853-54 New York World’s Fair, held in Manhattan in a Crystal Palace inspired by the iconic one realized by Joseph Paxton for the London 1851 Exhibition. 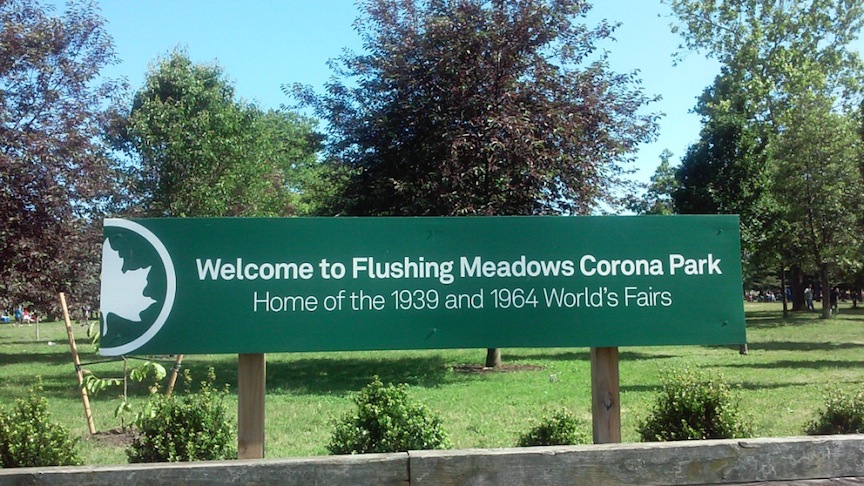 The 1939-40 World’s Fair covered the 1200 acres of a former ash dump in Queens, which Francis Scott Fitzgerald called a “valley of ashes” in The Great Gatsby. The site also hosted the 1964 New York World’s Fair and later became what is today the Flushing Meadows-Corona Park, where the New York City Pavilion has later become the Queens Museum (after hosting the United Nations from 1947 to 1952).

The 1939 fair is particularly fascinating, given the crucial historical moment it took place, and it’s also deeply interesting to think of Italy’s official participation in such an event on American soil at that time. Conceived in 1935, that fair was meant to help to lift New York City and the United States out of the Depression. Robert Moses, the urban mastermind and so-called “Master Builder” of NYC, and Mayor Fiorello La Guardia played an extremely important role. Focused on the future, the Fair’s theme was “Building the World of Tomorrow”; the slogan for 1939 was “Dawn of a new Day”, while for 1940 the hopeful but tragic motto was “For Peace and Freedom”. 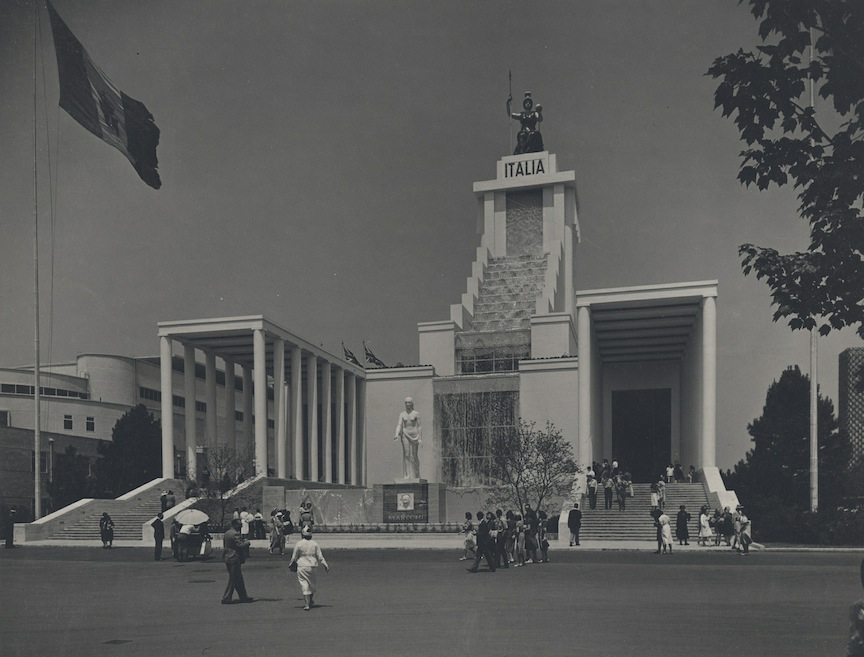 The dates are crucial. On the eve of World War II, the opening speech by President Franklin Delano Roosevelt (Apr 30th 1939) was about peace and the concerns for the situation in Europe. While Germany did not participate (officially on account for budget problems, but of course Germany needed all its resources for the impending war), and the USSR built the most monumental pavilion of the Fair but only took part in 1939, Italy, that is to say Fascist Italy, participated with a huge pavilion (the second largest after the Soviet building) designed by the architect Michele Busiri Vici. Majestic but somehow elegant, it combined ancient Roman magnificence with the peculiar Fascist modern style. On the facade there were a statue representing Rome, a monument to Guglielmo Marconi (one of the greatest modern Italians) and a very tall waterfall (60 meters high).

Inside the building Italy showed both works of art and industrial products, and there was a very popular Italian restaurant.

The war broke out only a few months later (in September), during the Fair, but for Italy it would have begun in June 1940. So, immediately before and during the first phases of the conflict, Fascist Italy was representing itself abroad, in the New World, in the Land of Freedom and Democracy, in a culturally antagonistic context, with huge visibility: the exhibition was visited by 44 million fair-goers. 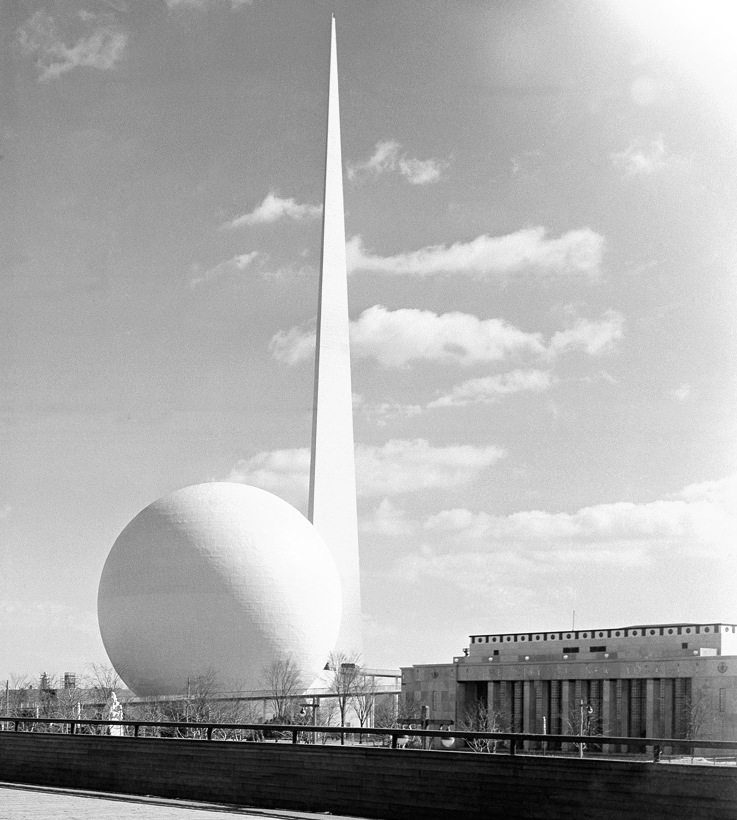 The Trylon, the Perisphere and the New York City Pavilion at the New York WorldÔÇÖs Fair 1939-40, detail. Photo: www.theatlantic.com

The imagery of the Fair was dominated by the white buildings the Trylon and the Perisphere, which were very popularÔÇòeven if temporaryÔÇòlandmarks. The Perisphere was a huge globe containing a diorama called “Democracity”, depicting the utopian city of the future. At the same time, General Motors financed the so-called “Futurama”, designed by the architect Norman Bel Geddes, showing the likely city of the future in 1960, dominated by cars shaping urban (and not only) landscapes through their peculiar needs of private means of transport. [Here a gallery of Images of the 1939-40 NY World’sFair. Both “Democracity” and “Futurama” celebrated the spirit of individual enterprise and the so-called “American Way” in a grand vision of the future. The contrast between the mentality, the collective imagination and the system of values proposed by these diorama buildings and Italy’s fascist pavilion couldn’t be more profound. They symbolized two absolutely dissimilar concepts of Modernity.

The war was about to sweep away the international spirit embodied in the World’s Fair: the steel structures of the Trylon and Perisphere in fact were later melted down to make bombs for WWII. 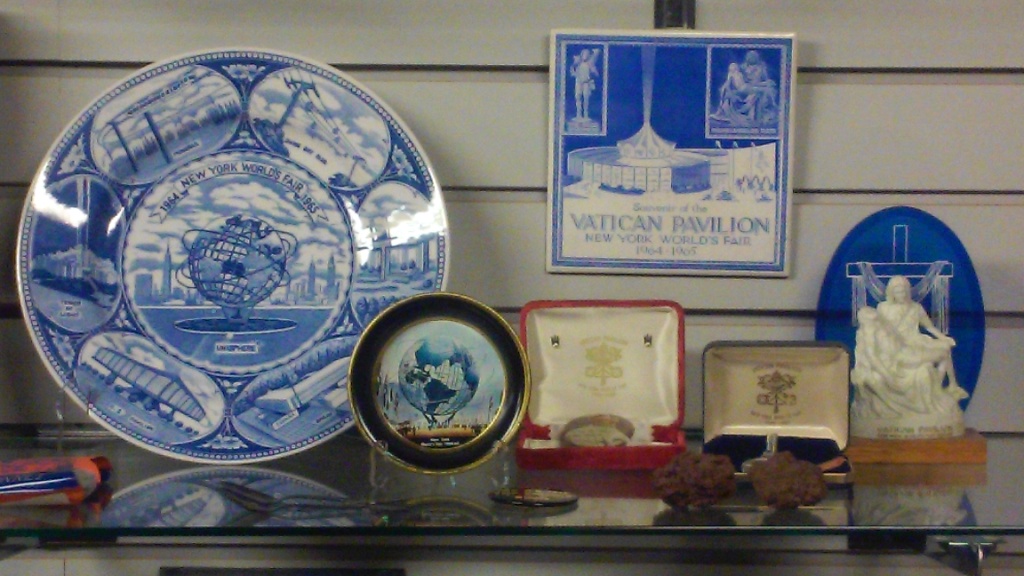 The 1964-65 World’s Fair theme was “Peace Through Understanding” and it was dedicated to “Man’s Achievement on a Shrinking Globe in an Expanding Universe”. It was mostly focused on technological and industrial achievements: American companies were the principal protagonists. The BIE (Bureau International des Expositions) had rejected its official endorsement, so many countries, among which there was Italy, refused to participate. Nevertheless, there was an exceptional Italian presence at the 1964 exposition: the famed Michelangelo Pietà was sent by the Vatican City State. This was the first and only time the sculpture left the country.

The main symbol of the1964 Exhibition was the Unisphere (a stainless-steel model of Earth), prominently situated in front of the New York City Pavilion (the same building from the 1939 World’s Fair). The Unisphere still exists and still welcomes people to Corona Park. 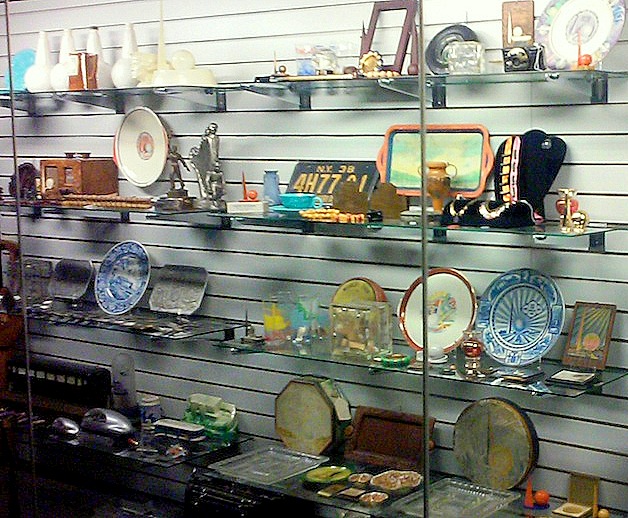 Nowadays the Queens Museum keeps documents, objects, artifacts and memorabilia of the World’s Fairs (a collection of more than 10.000 items), together with the Panorama of the City of New York, a spectacular model of the Big Apple realized in 1964 and since updated several times. Both the Panorama and the World’s Fair Visible Storage  (900 objects) are on long term view: the Queens Museum is thus a landmark and a reference of utmost importance both for scholars and tourists interested in this peculiar chapter of the history of New York.

*Ilaria M. P. Barzaghi is a current fellow at the Center For Italian Modern Art.