Russia can veto a Security Council resolution, but it can’t veto the truth

Owing to the negative vote of one of its permanent members, the United Nations Security Council today failed to adopt a draft resolution which urged countries not to recognize the results of this weekend's referendum in Crimea.

Thirteen of the Council's 15 members voted in favour of the draft text, Russia voted against, and China abstained. A veto by any of the Council's five permanent members – China, France, Russia, the United Kingdom and the United States – means a resolution cannot be adopted.

The resolution would have reaffirmed Ukraine's “sovereignty, independence, unity and territorial integrity” and declared that Sunday's referendum which could lead to Crimea's break with Ukraine and union with Russia, “can have no validity”.

Speaking ahead of the vote, Russian Permanent Representative to the UN, Vitaly Churkin, said it was “no secret” that Russia was planning to vote against the draft. He added that Moscow would respect the decision of the Crimeans but could not accept the basic assumption of the draft resolution which aimed “to declare illegal the planned March 16 referendum where residents of the Republic of Crimea should decide on their future”.

If Russia's vote doesn't come as a surprise, the unknown factor was China. With its abstention, the eastern superpower (which traditionally in the Security Council has sided with Russia) chose a neutral position, claiming, its opposition to the Russian invasion of Crimea, while distancing itself from the excesses of involvement in the internal politics of sovereign states shown by the U.S.. Liu Jieyi, Permanent Representative of China to the UN, said after the vote that Beijing sought a “balanced” solution to the conflict within a framework of law and order. He called for the creation of a coordination group, a support package for Ukraine, and also called on countries to refrain from action which could further escalate the conflict. 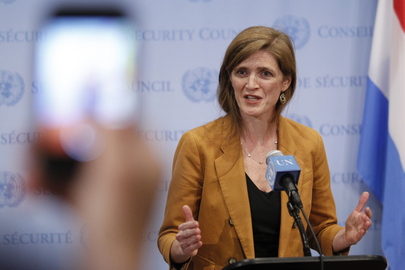 Deep disappointment and incredulity was expressed by several Council members, who noted that this was the seventh time the body was convening to discuss the situation in Ukraine.

United States Permanent Representative Samantha Power, whose country sponsored the resolution, said the text was aimed at finding a principled and peaceful solution, and upheld UN principles on the sovereignty of its Member States.

United Kingdom's Mark Lyall Grant said the result of today's vote highlighted Russia's isolation over Crimea within the Council and from the international community.

Meanwhile, Gérard Araud of France quipped that Russia “vetoed the UN Charter” with its “no” vote.

Secretary-General Ban Ki-moon has said that “emotions have been hardened” over the forthcoming referendum.

Addressing journalists Friday at the UN Headquarters in New York, Mr. Ban cautioned against “hasty measures and decisions which may impact the sovereignty, unity and territorial integrity of Ukraine” and stressed that any actions should be in accordance with provisions of the UN Charter.

UN officials, including Mr. Ban, have been appealing to all parties to calm the situation and to engage in direct and constructive dialogue to forge a peaceful way forward in Ukraine, which has been witnessing unrest for several months.

Tensions heightened last week as lawmakers in Crimea, where additional Russian troops and armoured vehicles have recently been deployed, voted to join Russia and to hold a referendum on 16 March to validate the decision.