Fabrizio Ruggiero: Contemporary Art Made with Ancient Technique in “The Transformative Power of Art”

Focus on a detail of one of Fabrizio Ruggiero’s paintings and you might think you’re looking at an aerial depiction of the earth, with winding rivers, rising mountain ranges, and sandy shores. Zoom-out and you’ll see that those textured planes, ever-so-slightly rising and falling from the canvas, actually form the chiseled jaw-line and blue eyes of a man, the rosy lips and delicate contours of a woman’s face. The Italian artist, who may have inherited his artistic talent from his family relative, the French painter Edgar Degas, is a contemporary painter who creates the textures of his portraits, monochromes, and sculptures using an ancient technique that extends back to the art of Pompeii: the fresco. 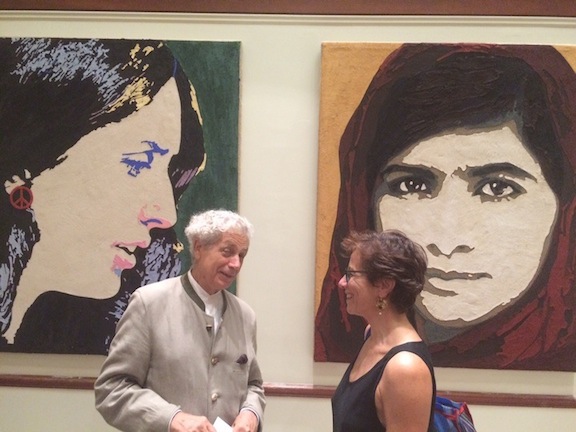 A selection of Ruggiero’s work is currently on view at the NYU Casa Italiana Zerilli Marimò through October 1st in an exhibition titled The Transformative Power of Art. The show was originally on display in the lobby of the United Nations Headquarters and featured 16 of Ruggiero’s portraits, his captivating, organically formed sculptures and monochromes, as well as a collection of papier mâché pieces cleverly resembling sculpted stone, created by Ruggiero’s wife, Nina Muzzi. Through Ruggiero’s use of natural elements, including lime plaster, wood, and mortar, the show celebrates the beauty of the natural world while, through the representation of renowned cultural figures, honors the efforts made towards the protection of human rights.

At the opening at the Casa Italiana, Director Stefano Albertini, along with the Director of the Italian Cultural Institute of New York, Giorgio van Straten, enthusiastically presented this year’s upcoming cultural agenda and introduced the new exhibition. 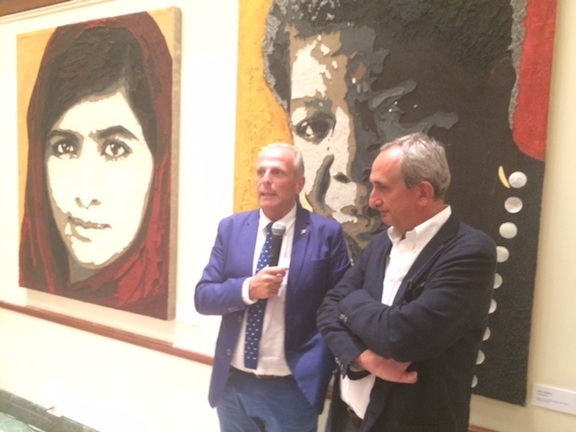 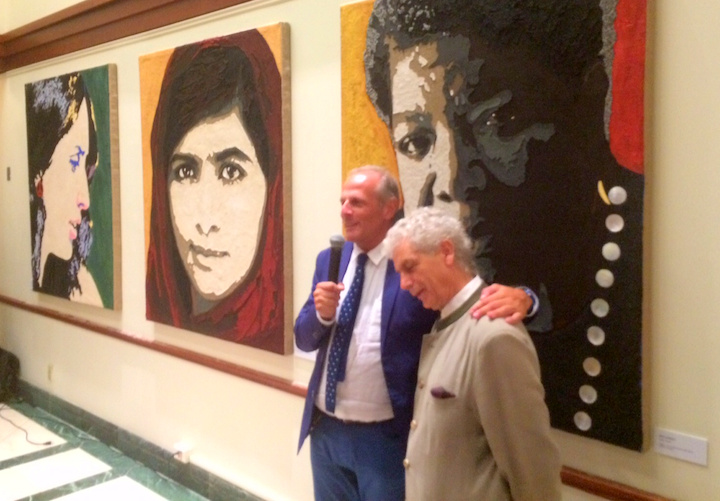 The smaller space of the Casa Italiana allows for only a few of Ruggiero’s works from the original UN presentation to be displayed, while the rest had to be placed in storage. Nevertheless, now featuring 7 of Ruggiero’s portraits and 3 of his abstract frescoes, the exhibition offers viewers an intimate yet comprehensive understanding of the concept behind the artist’s mesmeric work. 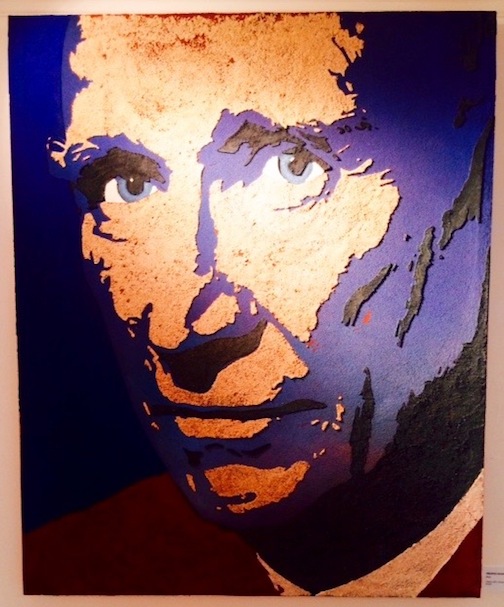 The 7 portraits chosen for the exhibition include those of writers, photographers, artists, actors, and singers from all over the world. They include Malala Yousafzai (Pakistan), Joan Baez (USA), Gong Li (China), Maya Angelou (USA), Miriam Makeba (South Africa), Sebastiao Salgado (Brazil), and Joseph Beuys (German). Each of the represented figures have their own distinctive story, but what they share in common is that they utilized their artistic talents to valiantly fight for the preservation of human rights. 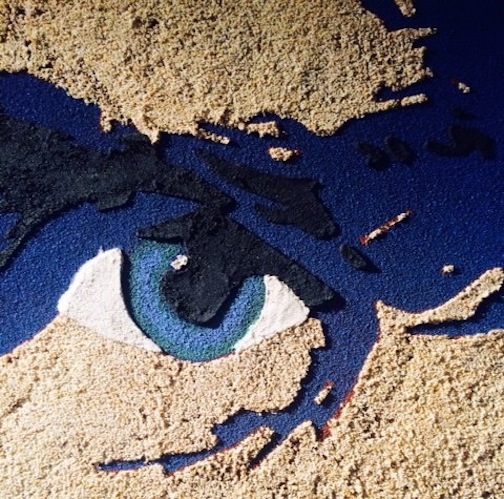 Detail of portrait of Sebasti├úo Salgado’s by Fabrizio Ruggiero

Take Joseph Beuys, for example, a figure that Ruggiero admires. He recounted Boyce’s story to La VOCE and illuminated the reason for why he was included in this group of people: “While fighting as a German pilot in WWII his plane was shot down. He was rescued by a tribe of nomads who nursed him back to health utilizing two materials: grease and felt. Boyce became a conceptual minimalist artist in the 1970’s in Germany and used those same two materials to make his art. He also pioneered a new art form, which he called ‘Social Sculpture’. In one of his last performances he symbolically planted 7,000 trees in a town in Germany, which was totally destroyed in WWII.” 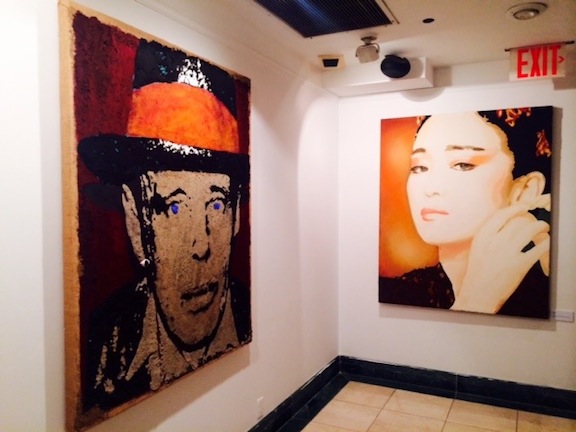 Through his artwork Ruggiero says that his aim is to explore and discover the ways in which sight can be grasped. “That to me is the function of the painting, communication to the eyes,” he says. Painting in fresco allows the artist to create textured surface patterns that play with the viewer’s eyesight and sense of space, visually stimulating the mind. In creating the textured surfaces of his frescoes Ruggiero uses modern technology to crush stone, which the artist says makes it unique to the place in which the work was created. “Fresco is made mainly with sand and lime plaster, but what you will get in Rome will be completely different from what you will get in Venice. The material with which the mortar is created is different. You can paint the same image, but the outcome will be different because of the different textures,” he explained. 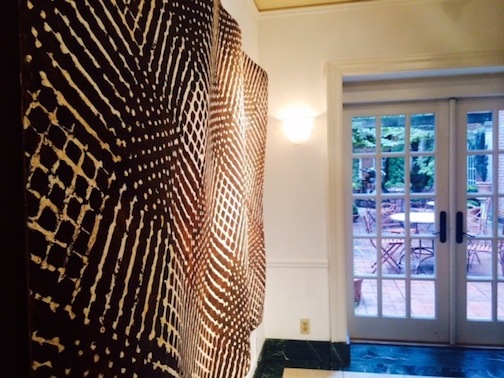 Due to the fact that his father forbade him to pursue a career as an artist, Ruggiero actually began his career as an architect. As a result of that training, space has also come to play a central role in his work, as evidenced by the rippling forms of his sculptures (which are made of reeds, a material used during the Renaissance when artists wanted to paint frescoes on a curved ceiling) and monochrome works. “Space in a contemporary physical world is undulated, not flat,” he explains. The alternating linear and dotted patterns painted on to the surfaces of his abstract frescoes, which are painted on plywood and therefore allow the artist to bend the material, also exhibit the artist’s play on depicting variations in space. 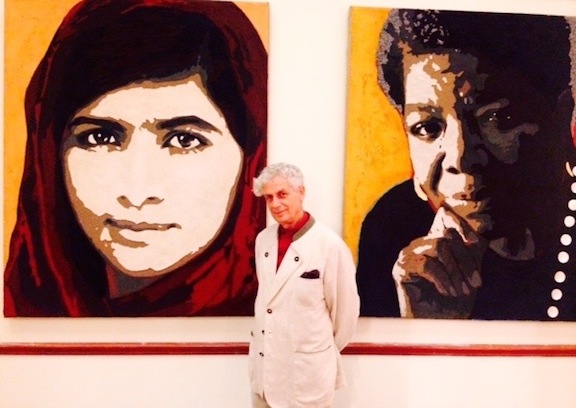 Words and pictures will not suffice in explaining the visual stimulation that Ruggiero’s work offers to the viewer. In order to fully grasp the power of Ruggiero’s work you will have stand in front of one of his paintings yourself. “I can tell you about the taste of a good coffee, but it will always be different from when you actually taste it,” Ruggiero said.

To hear more about Ruggiero’s work and his technique attend the Gallery Talk at the Casa Italiana with Fabrizio Ruggiero and author Idanna Pucci on September 14th at 6pm.