Bassetti’s Manifesto, a Wake-Up Call for All the Italics of the World

In New York Piero Bassetti presents his book "Let’s Wake Up, Italics! A Manifesto for a Glocal Future" 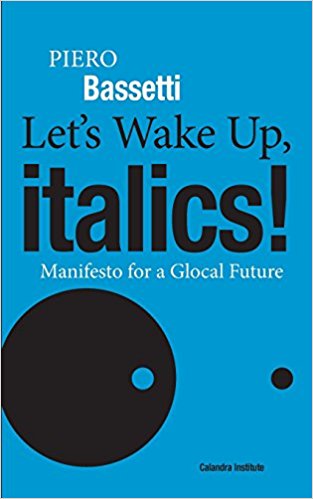 “A wake-up call” are the words that open Piero Bassetti’s latest discussion of his notion of Italics and Italicity in his book, Let’s Wake Up, Italics! A Manifesto for a Glocal Future, which is the English translation of the original Italian, just published by the John D. Calandra Italian American Institute, with a preface by Distinguished Professor Fred Gardaphé. Bassetti wants to go beyond the biological in identifying those people he calls “Italics”, and he bases his convictions on the changes due to globalization that he has personally witnessed during his decades of cultural and political activity. In the very first pages of Let’s Wake Up, Italics!, he states:

Italics are not just Italian citizens in Italy and abroad. They are, above all, the people of Canton Ticino, Dalmatia, and San Marino, and their descendants; Italian Americans, those of the two Americas and of Australia; as well as Italian speakers and all those people who might not have a drop of Italian blood in their veins, but have nonetheless embraced our county’s values, lifestyle, and shared behavioral models. (2)

It is this very sense of ecumenical universality that sets Bassetti’s notion of Italicity apart from most other concepts of identity that we have seen in the past. “[T]hose people who might not have a drop of Italian blood in their veins” have never been brought into the discussion of “Italian” identity. Indeed, even “Italian Americans, those of the two Americas and of Australia” have at times been cast aside when “Italian” identity has been brought to the fore. To include both here speaks to the originality and, dare we say, open-mindedness that has often been lacking in the past.

As I have stated elsewhere, “[t]he desire to coin new terminology is surely admirable, especially if the intent is to flatten out nuances of hierarchy” (196; see my “Afterword” in New Italian Migrations to the United States, Vol. 2: Art and Culture Since 1945. Edited by Laura Ruberto and Joseph Sciorra. Chicago: University of Illinois Press, 2017. Pp. 193-202.). In my afterword, I also speak to the notion of changing paradigms and how said paradigms need to recognize, first and foremost, the changing dynamics of the ever-increasing phenomenon of migration and thus respond in an aesthetic-critical manner. This, I underscored, is the initial stage of what I consider the necessary, conceptual paradigm shift if Italian studies is to broaden its horizons and catch up to other socio-aesthetic fields of intellectual interrogation, such as American studies, French, German, and Latin American studies, to name a few.

In proposing a new schema I was discussing different types of writers who, to date, have been considered significantly different either for linguistic reasons (the hyphenated Italian writer in English), for geographical ones (the emigrant who writes in Italian in another country), and/or for biological reasons (the non-Italian immigrant to Italy). Of course, to this triad, and in following Bassetti’s words above, we must also add that person who does “not have a drop of Italian blood in [his/her] veins” and lives outside of Italy; and in this case I had mentioned in my afterword two people in the United States: Italian professor Rebecca West and the U.S. writer Jhumpa Lahiri, two people who, together with all the above, as I stated, “each dialogue in their own way with the ur-sign that is /Italy/, as I mentioned” (199).

What the reader of Let’s Wake Up, Italics! will realize in the end is that Bassetti’s manifesto does indeed wish to flatten our hierarchies. We come to understand this when Bassetti offers one of the reasons why he chose the terms “Italics” and “Italicity.” In eschewing “suspicions of declassification in those who, if their hybridization were pointed out to them, could have felt relegated to a position of inferiority compared to those who were classified as (“pure”) Italians” (34), he felt the need for a new term. In so doing, he clearly renounces the oft-held dichotomy of “pure” Italians vis-à-vis descendants of Italians, immigrants to Italy, and all those others, as Bassetti states above, “who might not have a drop of Italian blood in their veins, but have nonetheless embraced [Italy’s] values, lifestyle, and shared behavioral models.”