UNHCR Launches an Alert: 1 Out of 97 People Worldwide Are Refugees

On the eve of World Refugee Day, Filippo Grandi delivers a report to the Security Council and the message of UNSG Guterres

On June 20th, we celebrate World Refugee Day. On this day, we honor the strength and resilience of people who have been forced to flee their home country to escape conflict or persecution.

As of today, there are almost 80 million women, children and men who have fled their country or are internally displaced. As UNHCR High Commissioner Filippo Grandi pointed out during the presentation of UNHCR’s annual Global Trends report, this is the highest number that the UN refugee agency has recorded ever since data has been systematically collected. This is approximately one percent of the world’s total population, or 1 in every 97 people, who has suffered forced displacement. Moreover, fewer and fewer of those who flee are subsequently able to return home. “[This] is of course a reason for great concern,” commented Grandi.

This year, in his video message delivered before June 20th, UN Secretary-General Antonio Guterres proclaimed: “On World Refugee Day, we pledge to do everything in our power to end the conflict and persecution that drive these appalling numbers.” This is notoriously a global issue but, as Grandi observed, the poorest countries are disproportionately affected. New and old emergencies in countries such as Afghanistan, the Central African Republic, Myanmar, The Democratic Republic of Congo, and Syria continue to trigger the massive flow of people.

Many of those conflicts, Grandi points out, have deeper root causes besides security. When leadership fails and when multilateralism doesn’t live up to its promise, the consequences are not felt in the global capitals of the world, but in the lives of those who have no power, firstly in those of refugees and displaced people. “We expect from you – the world expects from you – decisive, clear and unanimous messages to end conflicts and pursue avenues for peace”, Grandi said, after urging the Council to “Please, please depoliticize humanitarian issues.” 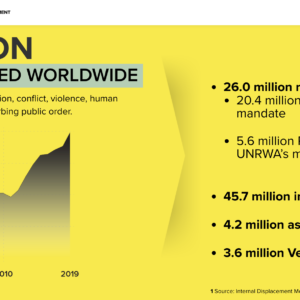 This year’s COVID-19 pandemic posed an additional threat to refugees and displaced people worldwide. Not only will it, according to Grandi, “increase population movements in the region [Middle East and Sub-Saharan Africa, ndr] but also beyond;” it also presents additional challenges for those who live in already harsh conditions such as in refugee camps and detention centers. 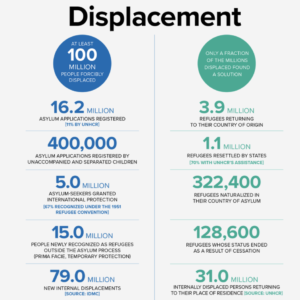 However, as Guterres did not fail to underline, “refugees and displaced people are also prominent among those who are stepping up to make a difference on the front lines of the response” to the pandemic. “From camps in Bangladesh to hospitals in Europe, refugees are working as nurses, doctors, scientists, teachers and in other essential roles, protecting themselves and giving back to the communities that host them.”

We must never forget about refugees’ courage, resilience and determination to rebuild their own lives and to help those around them. Today, on June 20th, and every day, as Guterres said, “we stand in unity and solidarity with refugees and recognize our fundamental obligation to shelter those fleeing war and persecution.”

UNHCR Launches an Alert: 1 Out of 97 People Worldwide Are Refugees

Global Alert: Covid-19 Is the Perfect Pretext for Limiting Freedom of the Press