IDEA on “The Global State of Democracy 2019: Addressing the Ills, Reviving the Promise". Today's crisis of the democratic process is an opportunity, not a tragedy

Massimo Tommasoli speaking at the UN

At the UN Headquarters, an international enclave of New York that legally is not part of the United States territory, the world’s bill of health was made public in the form of an extremely important 256-page report. The title is telling: “The Global State of Democracy 2019: Addressing the Ills, Reviving the Promise”.

The event is promoted by Stockholm-based  International IDEA, the only intergovernmental organization exclusively working on democracy worldwide, whose title stands for Institute for Democracy and Electoral Assistance. On the state of democracy in Europe it says: “Of the 10 democracies in the world currently experiencing democratic backsliding, six – Hungary, Poland, Romania, Serbia, Turkey and, to a lesser extent Ukraine – are in Europe”. These countries “are currently experiencing severe forms of democratic backsliding. Although each country context differs, common characteristics include weakening accountability institutions, executive aggrandizement of officials in leadership position, curtailing of dissent and efforts to ensure long-term rule by stifling opposition and civil society”. The words carefully used by IDEA weigh like millstones.

Italy also, one of the founding nations of postwar democratic Europe, does not fare much better. The country, true, is no Banana Republic. It is after Germany, and at a par with France, the second or third largest manufacturing nation in the Eurozone. But, shaken as it is by the tsunami of populism and of the dishonestly named “Alt-News” spread by the Web, Italy’s democracy, while fundamentally solid, is seriously disoriented.

In the IDEA report Italy still features in the number of countries of Europe that are rated as “high” for representative government. In “participatory engagement” however, Italy is already relegated (temporarily, one hopes) in the Serie B of democracies’ league. Its politics, parochial with no vision, are wallowing in prejudice and self-defeating negativity. They are increasingly Balkanized. The Italian public, fed with a combustible mixture of  fake “Alt-News”, outright lies and viciously partisan talk-shows, is cynical and confused. In extended Europe, only hardcore non-participatory cases like Azerbaijan, Belarus, Russia and Turkey fare worse. 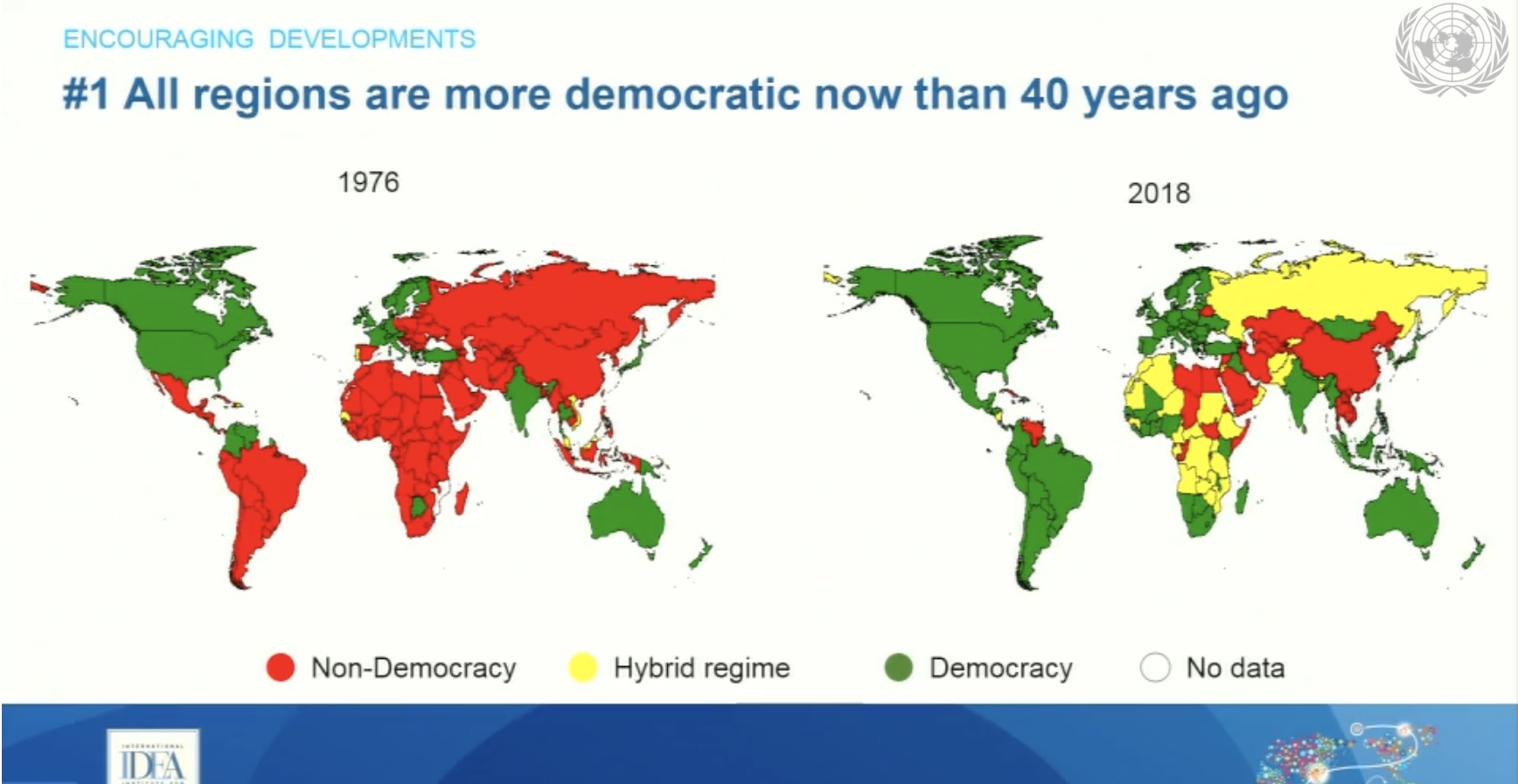 Alt-News, incidentally, is pure Orwellian newspeak. It describes, as in George Orwell’s “1984” book, the perverse effects of repeated blatant lies dressed like incontrovertible facts. Chemical streaks “causing cancer”; the non-existent “vaccines that kill and cause autism”; the Twin Towers destroyed not by Al-Qaeda terrorists but by a totally false “cabal of Masonic-Jewish plotters aided by America’s Deep State”. The waves of falsehood spread, via tweets and other social media, even from the White House, are disgraceful examples of everyday life in the fraudulent universe of Alt-News.

Italy is far from alone in such a predicament. Officially inspired mendacity and obfuscation operate with impunity in Washington, Moscow. Beijing, Tokyo, Rome, and virtually everywhere in the world. In the Americas, while Venezuela is according to IDEA “the most democratically ailing country” in the southern subcontinent, and in Central America a particularly serious democratic breakdown has occurred in Nicaragua, in North America the United States backsliding under President Trump gives cause for concern.

As the report points out, in its GSoD Indices (Global standards of democracy), the US, while remaining “a democracy with relatively high performance,” shows signs of democratic erosion. “Indeed, the USA is among the 12 countries in the world with the most subattribute declines since 2013”. Even if, as IDEA notes, these declines are not serious enough to be labelled as democratic backsliding, the negative trend is worrisome.

According to the report’s rigorous terminology, democratic backsliding occurs when the  GSoD (global standards of democracy) indices point to a ”gradual and intentional weakening on Checks on Government and accountability of institutions, coupled with declines in Civil Liberties”.

While the United States’ democratic decline has not reached this low level, the trend, in parallel with the gradual erosion of  Constitutional “checks and balances,” is far from reassuring. With the U.S. Congress paralyzed by parliamentary warfare, and with President Trump’s impeachment that will inevitably hit a brick wall when Republican-dominated Senate will absolve him next year, it is not only the 45th president’s status that is going to suffer, but far more importantly, the world credibility of the United States. Impeachment, originally conceived by the Founding Fathers as a kind of “nuclear option” to safeguard the integrity of the Republic, will be hopelessly neutered and used by both parties as a sledgehammer to score political points.

With oversight weakened, as The Economist writes in a despairing editorial, the presidency will become more imperial. In this sense, given the United States’ albeit declining world role, the global health of democracy needs monitoring with particular care. But as the scientist Stephen Hawking (an atheist!) famously said: “while there’s life, there’s hope”.

Russia-Ukraine, Will it Be the Forever War? Don’t Ask!

Sleepwalking Into the Unknown: A Fatal Optimism on the War in Ukraine