Why are we so drawn to Italian language and culture? What is the particular fascination with Italian by foreigners?

To understand the great influence that Italy and Italian has globally, we interviewed Annamaria Testa, an equally fascinating Italian.

Entrepreneur and academic, expert in communication and creativity, she owns her own advertising agency, Progetti Nuovi, is a teaching fellow at the Bocconi University in Milan, as well as a prolific writer of books and articles (in her academic and professional field, in news media, on the web and in print).  This writer was enchanted, watching her at the Joint Action conference in Florence in October 2016. She was a powerhouse on stage with leaders of large Italian multinational corporations, and renown journalist and writer Beppe Severgnini. I, the Italian professor in northern NJ, was riveted by her exchanges with these leaders, about the role of the Italian language to advertise Italian excellencies, and her recommendations to safeguard Italian in the business world.

Annamaria Testa’s prestige is relatively unknown in the U.S., yet internationally she is held in high regard, not only for her reputation as an advertising guru but also for her role as leader in numerous social initiatives: linguistic activism, women’s rights, the protection of children, and creativity. With this interview Annamaria Testa granted  to La Voce di New York, we are very pleased to introduce to our American audience her contributions and dedication to Italian language and culture.

“The first certain thing we know about Italian is that it is widely studied around the world. The second certain thing is that it is not studied for business reasons.
Regarding the love that foreign people have for our language, more than a ‘luxury,’ I would call it a seduction. First and foremost, its sound: our words in Italian sound more harmonious. And then, of course, there are music and art, food, fashion, furniture, and landscapes. All of this recalls to mind an idea – and a dream too – of desirability and beauty.
There are other reasons. For example, the fact that Italian is the official language of the Catholic Church. Another example, the fact that Italian is the real lingua franca of art critics and museum directors, who don’t consider themselves so unless they studied in Italy, and they speak Italian wherever in the world they find themselves, whether it is in Hong Kong or Vancouver. A representative of our Ministry of Foreign affairs shared this anecdote with me and I think its lovely.
It’s precisely the Ministry of the Foreign Affairs to point out that our language is an important ‘soft power’ tool. Political scientist and Harvard professor Joseph Nye developed the concept of ‘soft power’ in the late 1980s. This refers to the ability to influence and obtain desired results, even without resorting to economic or military power.
And here we are back to seduction. There is a global ranking of soft power, and in 2016, Italy ranked 11th and is now moving up on the list. That is also thanks to the bella lingua and the attraction it provokes in people.”

Does Italian still have this allure within its own borders? I mean, do Italians love their language?

“Some Italians love their language – a lot. But not all of them do. On the other hand, a rather negative trait of our national behavior is that we systematically undervalue all the beautiful and precious things belong to us, and often refuse to adequately preserve them and promote them. But I have the impression that the general sensitivity is shifting, albeit very slowly. On the one hand, it seems that people are starting to pay more attention to the topic of language; on the other, they are more openly stating their intolerance with regard to, for example, Itanglish, the useless and exaggerated use of English words that can be perfectly substituted by corresponding Italian terms.”

How do you explain the invasion of Anglicisms in the Italian language, even at the level of government? Does the motto “English, internet, enterprise,” which was buried as an educational reform project, persist in the socio-cultural context?

“What is interesting is that, even though Italians abuse Itanglish, they don’t really speak any foreign languages, including English. To quote some data from Istat (the Italian National Institute of Statistics) from a recent book L’italiano alla prova dell’internalizzazione (literally, Italian put to the internationalization test): only 14.5% of Italians have a good or excellent knowledge of English; 33.5% has a poor or satisfactory knowledge of it, and 50.4% of Italians don’t speak English at all. The rest of them didn’t even answer the survey.
If we take into account this data, it’s perfectly clear that using English terms in official documents or to name new laws is inherently anti-democratic insofar as it doesn’t allow a large number of citizens to have a proper understanding of the texts.
However, on the brightside, Itanglish is seen less and less as a symbol of modernity, internationalism, and cosmopolitanism, and more as a sign of provincialism and a desire to show off and pull the wool over our eyes. It’s also a sign of poor knowledge of the meaning of English words. The government and ministers have been harshly criticized by many for abusing English terms.” 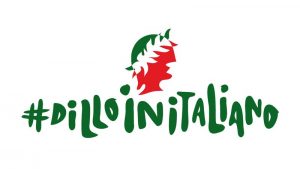 Regarding the #dilloinitaliano (#sayitinItalian) campaign. Here we are, two years after the launch of the petition, which quickly achieved its goal. What efforts have been made to date? What have the results been so far?

“We reached a few goals: the signatures were handed over to President Mattarella. The Accademia della Crusca created the working group “Incipit,” which will monitor neologisms and new foreign words that enter the Italian language and are used in civil and social spheres, and are tasked to identify and propose valid Italian alternatives. I am honored to have been asked to join this group.
The Constitutional Court has recently ruled that universities cannot offer degrees entirely in English. This is a major victory for Italian because it is part of both one’s individual and professional identity. To study a discipline only in English, would have caused students to lose a complete knowledge of specialized Italian words, and this would have done them a great disservice, in addition to being a source of endless misunderstandings.
Again, many books published or currently in publication that continue, expand and consolidate the same topics and the spirit of the petition.
Before we had nothing, now we have something. But clearly, it’s not enough.
There is a project in an advanced phase of study that could help change things, and has the work group Incipit taking the lead. I hope the required funds to launch it will be found: after all, we would need a rather modest amount.”

In October, at the Joint Action conference, during the round table in which you, Andrea Illy (illycaffè), Olivier François (Fiat Chrysler), Clément Vachon (San Pellegrino) and Leo Gavazza (Bulgari) participated, which was moderated by Beppe Severgnini, there was an effort to challenge businesses by proposing a user manual of the Italian language in commercials and advertisements. Is this proposal catching on? How can we change the business strategies of the “Made in Italy” brand?

“This is an exceptionally sore point for me (watch her Italian TEDx talk at the end of the article – ed). For instance, last week, in the Milan subway, I saw a big billboard for novelty ice cream products, which says: Nuova Magnum pot, made to be broken. Magnum, for pleasure seekers.
Pay close attention: we’re talking about an ice-cream that is meant to be eaten at home; therefore, it is not targeting tourists, but Milan’s locals. Except for the brand name “Magnum,” of the other nine words there is only one – “nuova” – in Italian. If we take into account the above-mentioned data about English, we seriously ask ourselves why they made this choice.
Moreover, promoting good Italian for Made in Italy products and for their communication would be a great way to contrast the deleterious phenomenon called Italian sounding, that is, fake Italian products, with fake Italian names and packaging, found worldwide. It’s a market that in the food sector alone is worth 60 billion (euro – ed).
But it’s worth mentioning a silver lining as well. Recently, Altagamma, the association that gathers excellent Italian companies and helps them to network, grow and promote themselves globally, decided to complement its name with an Italian definition, and it’s a great success: Altagamma, Italian culture and creativity.”

Let’s reverse the situation. A few months ago, I looked into some of Italianisms used by companies (not including the food sector) in New York and I presented a lighthearted list of the Italian language, and discovered whoever wishes to do business here would benefit by knowing Italian. In your opinion, what does the use of Italian, especially by non-Italians, mean for the Italian language? High hopes to think that this language, so loved abroad, can be saved, and perhaps it could be foreigners to save it?

“Well, it would be interesting to remind provincial Italians and all xenophiles that “New York echoes with Italian words.” In any case, the interest of foreigners in our language is helpful for so many reasons. Because we care about what people abroad think of us. Because we are ready to follow the latest trends, and if speaking in good Italian becomes a trend, we’ll be a part of it.”

“I can tell you that any language gives a special form of thinking. The words that we use to name things, and the linguistic structures in which we insert words, are what direct cognition, intuition, the association of ideas, and invention.
On the one hand, this means that being able to think in many languages (and knowing each language well!) could increase creative perspectives. It also means thinking in Italian can guide and determine the specific Italian way to design and invent as well.”

Thanks to Giulia Casati for her assistance with the translation