Merry Christmas from the Vatican: A Cookbook to Bring Joy in a Sad Year

"The Vatican Christmas Cookbook," by former Swiss Guard David Geisser and Thomas Kelly, comes in a year when home-cooked foods may be the only solace

Two weeks ago, I received a press release from Sarah Lemieux, the Publicity Coordinator of Sophia Institute Press, about its hot-off-the-press publication, The Vatican Christmas Cookbook. 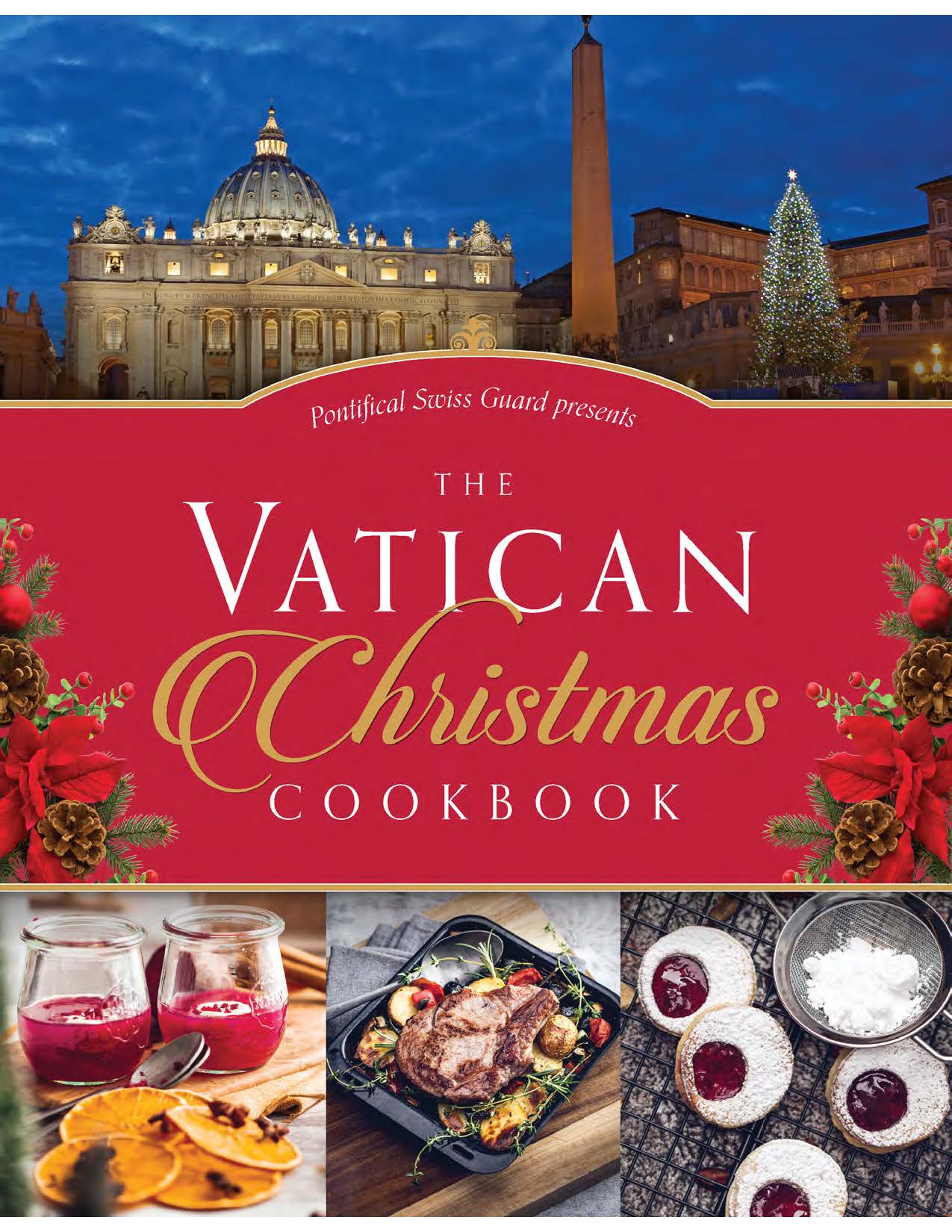 It’s the sequel to the Institute’s best seller The Vatican Cookbook, which I reviewed on June 21, 2018. Since home-prepared food may be the only solace of the 2020 holiday season, I thought La Voce readers might enjoy owning or giving this beautiful, if too hastily produced, volume.

Like its predecessor, The Vatican Christmas Cookbook is sponsored by the Pontifical Swiss Guards and The Holy See of the Vatican City State and co-authored by former Swiss Guard David Geisser, one of Switzerland’s leading chefs and TV cooking show hosts. In between these Vatican volumes Geisser has written three other cookbooks, but they’re available only in German.

In this second Vatican volume Geisser researched and created the approximately 70 recipes (many not unexpectedly, from Swiss and Italian kitchens).

His American co-author Thomas Kelly, a resident of Cleveland, told me in a November 21 email that he’d transcribed Geisser’s recipes and had written the interval texts about the legends, traditions, and history of Christmas in the Vatican City and around the world.

Geisser had already explained in an email a few days earlier that, “Together we narrowed down the list of my recipes and chose those we felt most appropriate for Christmas and the Vatican, even if some are not specifically limited to this holiday season.

The splendid images of food are by the Swiss photographer Roy Matter, who has previously collaborated with Geisser on three of his bestselling cookbooks. Matter took the photos, Geisser had explained in his email, “in my cooking studio near Zurich.  There I host a lot of events, photo shoots, VIP events, and record my TV show. We chose the photos together.”

The Vatican Christmas Cookbook, available from Amazon ($34.95), follows the Christmas calendar: Advent, Christmas Eve, Christmas, and Epiphany.  Additional chapters are: “Dishes on the Side” (all featuring potatoes or rice), “The Joy of Fondue”, “Christmas with the Popes”, “Christmas Desserts” (mostly Swiss), “Christmas Prayers and Graces” and “Christmas Around the World.”

The latter focuses specifically on the traditions in Argentina, Egypt, The Philippines, and Switzerland, but includes recipes from many countries. Sadly, some here are missing captions, which would have specified their nationality. I also found it odd that Panettone, Pandoro, and Panforte were missing from Geisser’s “Christmas Desserts” since, as he said in his email, “the book is about Christmas in the Vatican”. Moreover, many of his certainly delicious recipes include few of the dishes I’ve enjoyed on Christmas Eve or Christmas Day during my 50 years in Rome.

For example, he omits several classics:  “il fritto misto” as an antipasto (fried codfish, artichokes, Roman broccoli), spaghetti with clam or tuna sauce, and various fish-based main dishes on Christmas Eve, as well as tortellini in brodo followed by bollito misto on Christmas Day.  The most bewildering of all decisions is that he included meat dishes for “Christmas Eve”.  Certainly, a no-no among traditionalists in Catholic countries.

In the Introduction Geisser explains that he included recipes for fondues and fajitas “because these dishes are meant to be shared at the table among friends, family, and guests.  These are the best of meals because they encourage and emphasize the human touch.”

Then at the beginning of the chapter, “The Joy of Fondue,” he confesses that he couldn’t omit fondue because it’s a Swiss specialty. In fact, in his email Geisser writes that in his family, “we always eat ‘Fondue Chinoise’ on Christmas Eve.” And to my question about Pope Francis’ favorite recipes, he answered, “I don’t know his favorite Christmas recipe, but I’m pretty sure his favorite dish is ‘Dulce de Leche’, (listed in the original Vatican Cookbook), which I’m sure he eats during the Christmas season.”

Although I would have expected Kelly’s chapter on “Christmas with the Popes” to be longer, he recounts the holiday of only four years: 451 AD, 592 AD, 1919, and 1981. By 451 the ferocious barbarian warrior Attila the Hun had invaded most of Asia, Eastern Europe, Gaul (today’s France), and northern Italy. Rome was his next objective even though the Roman Empire was collapsing and the plague and famine had left this once world-dominating city virtually a quagmire.

Nonetheless, the fearless Pope Leo I (r. 440-61), later known as Leo the Great and sanctified, traveled with an unarmed delegation of bishops and priests to meet Attila, flanked by his entire army, near today’s city of Mantua.

It seems Pope Leo asked Attila for mercy, but there are no official reports of why Attila had a change of heart, withdrew his troops, and retreated northwards.  According to legend, during the meeting with Pope Leo, he was shaken by a vision of St. Peter and St. Paul brandishing swords in the sky.

“Thus, without Pope Leo’s courage,” explained Kelly, “there would have been no Christmas in 451; Attila would have wiped Rome off the face of the earth once and for all.”

Although I couldn’t find a reason for Kelly’s choice of singling out the Christmas of 592, there’s no doubt that Gregory the Great (r. 590-604), who’d been born into a wealthy and politically powerful Roman family, was one of the most admirable early popes.

For soon after his mother became a nun, he put aside his political career for a life of monastic piety. Although never wanting to be pope, particularly noteworthy during his reign were his land reforms to support Rome’s poor and his diplomacy. For example, his closest advisor, the missionary Saint Augustine of Canterbury (not to be confused with his more famous namesake) converted the Anglo-Saxons.

Not surprisingly Gregory was sanctified immediately after his death. Today he’s best known as a music lover and the promoter of plainsong, later named the Gregorian Chant.

The chronological gap between 592 and 1919 seems excessive even if the moral fiber of many popes during the Renaissance and the Baroque was dubious.  However, 1919’s Christmas was an appropriate date to celebrate.  The First World War had ended the year before and the Spanish flu was de-escalating even if only briefly.

Three years later Pope Benedict XV (r. 1914-1922) succumbed to the disease.  Christmas 1981 was certainly a date to celebrate.  Pope, now Saint, John Paul II had recovered, if never completely, from Ali Acğa’s assassination attempt on May 13 of the same year.

“Sadly, the book’s production was complicated by Covid,” explained Kelly, whose favorite recipes are Christmas cookies no matter where he is, “and had to be condensed to meet the Christmas season deadline so some of my ‘Christmas with the Popes’ stories as well as other sections had to be deleted.”

“Nonetheless,” wrote Kelly, “through some of the photographs and first-hand accounts of Pope Francis’ activities we’ve tried to give an inside look into the Vatican at Christmas today.

I think we’ve been successful. David and I are working on another Vatican cookbook to be published by The Sophia Institute Press, but it’s still a ‘Vatican secret’.” Geisser was a bit more forthcoming.  He said that the next book “will focus on a different season but still thrill foodies.”  So be on the lookout.