What does Pope Francis usually eat? And what about the previous popes?

The Vatican Cookbook and A tavola con Papa Francesco.

I was helped in my research by four books I had in my library: La Cucina dei Papi: Ricette Segrete di Abbazie e Monasteri, a volume of Enciclopedia del Mangiare Sano; The Opera of Bartolomeo Scappi (1570): The Art and Craft of a Master Chef, translated with commentary by Terence Scully; Buon Appetito Santità by Mariangela Rinaldi and Mariangela Vicini; and the chapter, “Papal Table” in Popes, Peasant and Shepherds by Oretta Zanini De Vita.  The outcome was two similar articles, both entitled “Papal Gastoronomy Since St. Peter”, published in the US monthly Inside the Vatican in October 2014 and the next month in Epicurean-Traveler.com.

Pope Francis’ rapport with food continues to interest readers. I only recently discovered two books on this subject even if one has been on the market already for four years. During a recent trip to New York, after my visit to the temporary exhibition “Heavenly Bodies: Fashion and the Catholic Imagination” I headed straight for the Met’s store, one of my favorite New York destinations.  There, much to my surprise, on a table with the exhibition’s catalog and other magnificently illustrated volumes about Renaissance art, lay several copies of Pontifical Swiss Guard Presents The Vatican Cookbook: 500 Years of Classic Recipes, Papal Tributes, and Exclusive Images of Life and Art in the Vatican ($35.00).

As a bibliophile and a haunter of bookstores, my favorite bookstore sections are biography, travel, and cooking, but I’d never before seen a volume devoted to food in Vatican City, where the only restaurant is the Museums’ cafeteria.  Even stranger was that, since I usually live a ten-minute walk from St. Peter’s Square, I’d never seen a copy in the many bookstores that line the Via della Conciliazione since its first publication in German, which sold out in less than two weeks, dates to four years ago and the English edition to two years ago.  After a closer look, however, finding it in the Met’s store was perfectly suitable thanks to its magnificent photographs of the Swiss Guards and Vatican artworks by the Polish identical-twin sister photographers, Katarzyna and Ania Artymiak.

The Vatican Cookbook is a collaborative project. Professional chef David Geisser, who learned to cook at home from his mother, compiled the recipes. A native of Zurich, at age 18 he’d already sampled life as a celebrity chef when his high school term paper-a recipe book entitled Around the World in 80 Plates – became a national success and he an overnight celebrity with appearances on important Swiss talk shows including “Aeschbacher”.  As his website states, “After gathering some work experience in the romantic gourmet restaurant ‘Motto del Gallo’ near Taverne, he started his apprenticeship at ‘Casale’, a Gault and Millau restaurant in Wetzikon run by star chef Antonio Colaianni.  He rounded off his training with another two years’ experience at ‘Colors’, UBS’s management restaurant on the Paradeplatz in Zurich.”  Before following in his father’s footsteps and in 2013 joining the Swiss Guards at age 23 he wrote a second hit cookbook, Through the Seasons, with superstar chef Stephan Wunderlich. Since leaving the Guard in 2015 he has his own Youtube Channel, It’s Cooking Time and has published a fourth cookbook Apéro Riche (2016). “His newest project,” continues his website, “is the opening of his own cooking studio in Wermatswil (Zurich), where he holds cooking classes.”

Several other Guards collaborated. Erwin Niederberger, an accomplished pastry chef in Zug before joining the Guards in 1999, has served for over 15 years as Sergeant of the Guard and Chief Information Officer. Thus he provided much of the narrative and historical passages. Daniel Anrig, a former Commander of the Guard (2008-2015) backed the project from the start and was responsible for the Swiss edition.  “No one should be surprised,” he said, ”that the Swiss Guard holds food in such high regard.  A soldier can only fight a war when he’s eaten sufficiently well.” In addition, Thomas Kelly, not a Guard, was the Supervising Editor of Sophia’s North American edition. 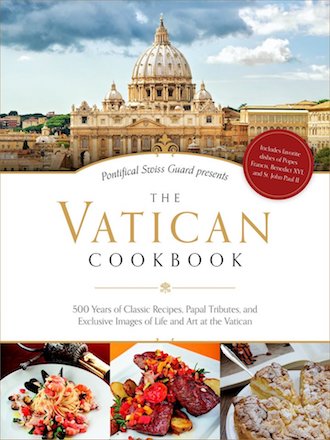 The Vatican Cookbook is divided into several chapters and counts 70 recipes.  It opens with “The Swearing-In” on May 6th and recipes for the dishes eaten to celebrate that important date (May 6th, 1527 was the only time the Swiss Guard saw combat).  The next three chapters include recipes for the favorite dishes of the last three popes: Francis’ Empanadas on Pepper Salad, Colita de Caudril, Dulce de Leche, Alfajores, and Pizza a Caballo; Benedict’s Regensberg’s Sausage Salad and Kirschmichel; and John Paul II’s pierogies.  The Popes’ favorite recipes are followed by those of Swiss Cardinal Koch: Wiener Schnitzel with French fries and of Italian Cardinal Secretary-of-State Paolin: gnocchi and Archbishop Gänswein, private secretary to both Benedict and Francis: saltimbocca alla romana since he’s lived in Rome for so many years.  These are followed by the favorites of the last seven commanders as well as of the choices of the Guards’ “family” for “A Swiss Guard is always a Swiss Guard, both on-and-off-duty”, the dishes eaten on the saints’ days of the Guards’ three patrons: St. Martin of Tours, St. Sebastian, and St. Nicholas, during Advent, and on Christmas and Easter.  The last section provides recipes for the Guards’ favorite typically Roman dishes.

The book concludes with a section of blessings to be recited before meals and an invitation to support the Catholic Relief Services’ “One Human Family, Food For All” campaign, which will receive 10% of the book’s proceeds.  As Jennifer Gregory Miller writes in her review published on May 17, 2016, on www.catholicculture.org, “It is a book that has something for everyone.  It is a cookbook that includes history, art, the Catholic Faith, culture, and even military tidbits.  The photos are breathtaking, giving a glimpse into what a Guard sees on a daily basis. It unfolds the Vatican and Rome though a Swiss Guard’s eyes.”

“Eat Parade”, Italy’s first TV show about food on RAI 2 every Friday from 1:30 to 1:50 PM, is celebrating its 20th anniversary this year.  The brainchild of its host Bruno Gambacorta, trained as a medical doctor before succumbing to his passion for journalism, each episode is usually divided into four segments: a chef explaining his or her recipe for a seasonal dish; an aspect of viniculture or of a specific wine or winemaker; a preview of the upcoming week’s eno-gastronomical events throughout Italy; and a listing of new food, wine, and travel books. 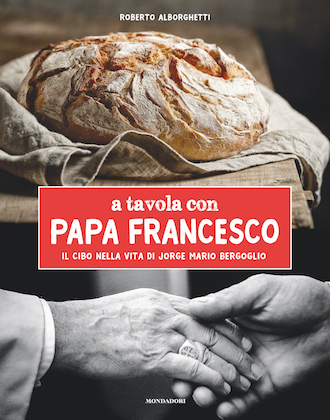 It was on Eat Parade that I first heard of A tavola con Papa Francesco: Il cibo nella vita di Jorge Mario Bergoglio  (meaning: At Pope Francis’ Table: Food in the Life of Jorge Mario Bergoglio) published in January 2018 by the Mondadori (19.90 euros).  Its author Roberto Alborghetti is a journalist at Bergamo’s newspaper L’Eco. He’s also written numerous biographies of saints as well as three volumes dedicated to the life and teachings of Pope Francis: Francesco, Nessuno resti indietro (“Let No One Stay Behind”), and  Come chicchi in una spiga di grano (“Like kernels in an Ear of Wheat”), all only available in Italian. 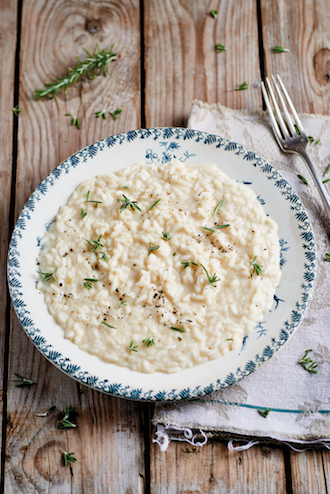 “Although A tavola con Papa Francesco… has not yet been translated into English,” Daniela Giustacchini of Mondadori’s Press Office wrote me in an e-mail dated March 23, “editions are available in Spanish (Larousse), French (Bayard Presse), Dutch (Kosmos-KOK), German (Random House, Verlagsgruppe), Hungarian and Polish (Kossuth). It’s a three-for-the-price-of-one volume:  a biography of Pope Francis, his philosophy about mealtimes: especially the joy of hospitality, his conviction that everyone should have enough to eat everywhere in the world, his strategy for not wasting food, as well as his 36 favorite (to cook and to eat) recipes, all photographed. Eight are his particular favorites, calamari ripieni and risotto alla piemontese are childhood memories; asado (roasted meat Argentine-style) and empanadas (similar to the Neapolitan calzone) date to his seminary years; maccheroni al forno con ragù and mozzarella di bufala and pizza with bufala e pomodorini gialli were often served during his many prison or soup kitchen visits; pan di spagna with a heart of mate was the cake prepared by Francesco Maria Ceravolo, owner of the pastry shop “Hedera” on Rome’s Borgo Pio, for Francis’ 80th birthday), and putizza, an Eastern European strudel he asked Melania if she made for her husband Donald.  But above all Pope Francis has a Biblical passion for bread.  “It’s made directly by God and therefore is a kind of ‘superfood’, an excellent remedy for all the afflictions of body and soul. If, when I was a child,” Pope Francis told Alborghetti, “a piece of bread fell on the floor, we were taught to pick it up immediately and to kiss it.  We never threw bread away.  It’s a symbol of God’s love for you, of the God who gives you food.”

As soon as he was elected Pope the world press dwelt on how, while Archbishop of Buenos Aires, he lived by himself in a modest apartment near the cathedral, cooked for himself and ate alone unless a nearby order of nuns invited him for the traditional Piemontese dish: Bagna Càuda, the subject of my Inside the Vatican February 2014 “Food For Thought”: “Bagna Càuda: Pope Francis’ Favorite Dish”.

Then as pope, it’s well known that he preferred another modest apartment in the Vatican’s guesthouse, Casa Santa Marta, to the luxurious papal apartments; that he eats his meals with the Casa‘s other guests; carries his own hand luggage on trips; and drives to parochial visits in a second-hand car.  “However,” writes Alborghetti, “not everyone knows that as a child Bergoglio dreamed of becoming a butcher; that he learned to love cooking especially for holidays from his grandmother Rosa; and that, before studying theology, he received a university degree in food chemistry and loved to cook for his fellow students both there and later at the Jesuit seminary, Collegio Máximo di San Miguel.

In short, this volume is a portrait of Pope Francis via his rapport with agriculture and his respect for farmland and the farmer, his “fight” for the availability of a healthy diet for all mankind, and the importance of conviviality, illustrated by his favorite recipes from throughout his lifetime. “Buon appetito”, like his heartfelt farewell to the crowd below in St. Peter’s Square at the end of his Sunday Angelus!