On November 10th at the Calandra Italian American Institute,  Fabio Parasecoli gave a sneak preview into his book, Al Dente: A History of Food in Italy. Fans of Italian food and Italian culture gathered to hear Mr. Parasecoli discuss certain aspects from his book. The true fruit of this event was the exposure to the history of the Italian culture’s most popular foods, and it resulted in having people in the audience question their own favorite foods and wonder what the history of these foods could be. 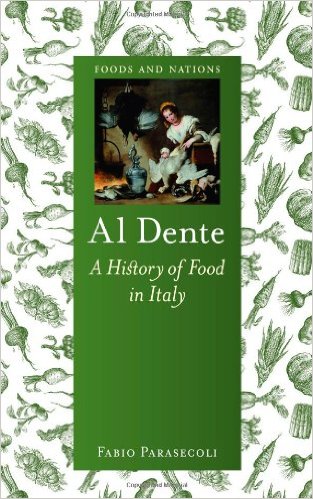 Fabio Parasecoli is an associate professor and a director of Food Studies Initiatives at the New School in New York City. He is also the author of Bite Me: Food in Popular Culture and co-editor for A Cultural History of Food: 6 Volume Set (The Cultural Histories Series). Most of the work he discussed at this event was based on his research on food, culture, and politics. Those three subjects were the ingredients he used to make up the book, Al Dente: A History of Food in Italy. Parescoli’s background knowledge on these three topics also derives from his previous studies on East Asian culture and political science in Rome, Naples, and Beijing.

Prof. Parasecoli served as an appetizer insights to the preparation and process of writing the book. The audience was also given a taste of his personality when he shared what drove him to write it: “This book is basically the result of many years of working both as a food critic and doing research in the field, as well as a researcher and a teacher. These two things bring two different aspects of knowledge, and I really appreciate both.” After sharing brief information about himself and the book, he transitioned onto the overall theme of the book which in itself presented his vision for this book:  “We decided about this theme because food is increasingly political in Italy. In Italy, it takes very interesting tones, for the fact that we have very strong local identities that are very often connected to politics. Food has played a very strong role affirming an essential Italianess, that I argue doesn’t really exist and hasn’t existed since 500 B.C.”

The presentation of  Prof. Parescoli’s was accompanied by visually appetizing images and his thoughts and anecdotes about writing the book. Among the images, there were pictures and old advertisements that portray the connection between politics and food: “We’ve been constantly global; we’ve never been left alone, if you think about the Greeks, the Romans, the Germanic tribes, the Arabs, the Normans, and then Spaniards, and then the French that conquered Italy. Of course, what we now consider Italian food is the result of this very long process of globalization.” Prof. Parasecoli made this claim in order to remove the notion of Italian food that is loved all around the world was created by Italians. Instead he demonstrated the contributions of other cultures that made their way into Italian cuisine, and explained the different Italian dishes after such contributions were made, in order to give Italian food it’s nationalistic identity.

The contributions from other cultures are rarely acknowledged, Mr. Parasecoli explained: “At the time people were not so much aware of this and they didn’t realize the changes that happened in the way they ate, and the way they grew food, and the way they chose what to eat and what not to eat.” He then used a solid example of these changes, an Italian staple, pizza. He spoke about his experience when he first came to America and reacting to New Yorker’s perception of the pizza. “When I started teaching here I realized that for some New York kids, pizza was not Italian, it was their food. They never had thought pizza could come from somewhere else.” Prof. Parasecoli then connected food and politics, by showing how pizza preserves its Italian identity. He further explained to the audience how he, as an Italian native, accepted such mentality from New Yorkers: “After all it totally makes sense. So what’s the story with pizza? It’s so Italian, that it enjoys a specific European Union label called specialità tradizionale garantita. What does it mean? It means that to be called Pizza Napolitana, it has to be made in specific ways with specific ingredients that have been put together by the Associazione Verace Pizza Napoletana (The True Neapolitan Pizza Association).”

The event covered multiple foods from Italy and shared Prof. Parasecoli’s discoveries in this field. He spoke about the labor that goes into making the foods accessible by the people, and he about the traditions that continue to live on today in Italy. Prof. Parasecoli guided the audience through the evolution of the food in Italy from the point that they’re planted in the farms to the point where it is served to the table. By explaining and demonstrating how food has changed in Italy, he not only influenced the audience’s love for Italian food, but he also gave the audience an appetite for Al Dente: A History of Food in Italy. He also shared insight to his upcoming book, Feasting Our Eyes: Food Films and Cultural Identity in the United States, to be released on November 29, 2016.

Watch our video interview with Fabio Parasecoli at Harvard University:

Italy on the UN Security Council at a Time of Terror

Grillo Backs Conte and Says M5S Is Staying in the Government