Crateful: A Former Soccer Player Scores with the Meal Kit

In the US, the meal delivery kit market is growing rapidly. According to Technomic, a Food Industry consulting company, the global “meal kit” market has topped $1 billion in 2015 and is positioned to reach $5 billion within 10 years.

The Fresh Food Subscription Market―also known as meal kits―is defined as a service designed to deliver fresh, pre-measured ingredients to the doorsteps of consumers. The major players are all recently founded startups: Blue Apron, with a $2 billion valuation, along with Plated, are the most popular; 22 Days Nutrition  is an all-vegan service launched by singer Beyoncé, and HelloFresh  is a German startup founded in Berlin in 2011 with almost one million subscribers in Europe and North America.

A bit over one year ago an Italian startup based in Los Angeles has been launched by a former footballer.  His name is Emanuele Ponzo, he played soccer in Italy at the semi-professional level until the age of 22, then a serious injury forced him to quit. 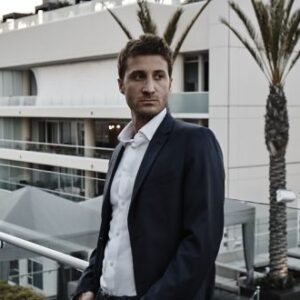 “Being unable to play soccer was very sad and the physical pain was very strong… at the same time my parents got a divorce and my father left my mother, my brother and I in a very bad economic situation. At that point something clicked inside me and I got a great desire to get back in the game, to prove to myself that I could still succeed. I pushed myself to forget about soccer and concentrate on something else. So, together with my brother Alessandro and my mother we opened a legal services agency.”

It was 2007, and thanks to the determination of the Ponzo brothers, who initially even slept in their car by the courts to be the first ones in line in the morning, the business grew quickly. In 2010, Emanuele enrolled in Law School and 4 years later got an International Business Law degree, founded a second company in real estate and opened a branch in Malta. Then, he decided to move to Los Angeles and start a new “adventure” with his wife Olga who is his business partner as well as an aspiring actress and model.

An idea started in the elevator

One day Olga and Emanuele took their building’s elevator and a couple of neighbors asked them: “Are you Italian too?” They found out that they lived on the same floor, and began meeting frequently  to talk  about starting a business together. Emanuele soon realized that the Italian food services sector in Los Angeles was in great need for innovation: “Both restaurants and catering services are a little antiquated, they are based on the Italian culinary traditions of 20-30 years ago. Today the world of Food is evolving rapidly and consumers demand innovative solutions.” So Crateful  started taking shape. “My wife was the first to propose the idea of a Meal Kit Delivery Program, then we all decided to add a catering side to the business and we are also developing a new generation of vending machines that we will launch in the coming months.” 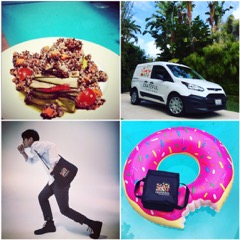 Crateful recalls the Italian gastronomic tradition, while including international dishes; however, it uses very innovative food processing techniques which were missing elements from the Italian food found in Los Angeles.  “At the center of our concept is the ability to offer high-quality meals which combine great flavor with nutritional properties and attention to wellness. Therefore, in addition to the Italian Michelin starred chef Cristina Bowerman, who I convinced to move from Rome to the US to work with us, we have in our team a famous Los Angeles nutritionist called Alyse Levine. They collaborate in the development of a healthy, balanced and flavorful meal program.”

Crateful approached this very exciting and competitive market with two promises: It does not “sell” miracle diets; It provides a balanced meal program that includes carbohydrates, proteins, vegetables and dessert too, because even the latter, when eaten in small amounts, is not harmful. The second commitment is to bring all the knowledge of its top chef into the creation of simple yet very tasty and healthy dishes. This results from applying very advanced preparation techniques.

“For example,” says Emanuele “we vacuum seal the filet mignon and cook it at very low temperatures for a long time, after that we sear it and put in the blast-chiller in order to bring it quickly from high to low temperature without freezing it. It’s the same procedure used for sushi. Then we pack it and deliver it to the customer’s home at night. In the morning the customer finds it at the front door and, if he decides to eat it in the evening, it would be 24 hours after delivery. However, after heating it up in the oven or in the microwave, it will feel like a filet mignon freshly cooked at an upscale restaurant.” The secret is in the cooking process described by Emanuele which makes the meat retain its juice and stay soft many hours after delivery.

Crateful’s subscribers are mostly professionals between 25 and 50 years of age with little time to cook: single women, couples without children or with very young children. However, the women are generally the ones deciding what meals to get for them and for their male partners because they are the ones who care the most about eating well and staying in shape.

“The average price of our program which includes breakfast, lunch, dinner and snacks, is about $60 per day. I tried an experiment to see if it was more affordable our meal kit or cooking at home. For a month I bought the same products we use at Crateful from Whole Foods  and cooked them every day.  After that period I concluded that, taking into account the cost of groceries as well as the time spent going to the supermarket and cooking, our Meal Kits program was saving me $350 a month. “

Everything is replicable, but Crateful’s secret lies in the quality of its products and its staff. Crateful, unlike American firms that rely mainly on profit margins in order to determine what to sell, prefers to earn a bit less in order to guarantee the highest quality. 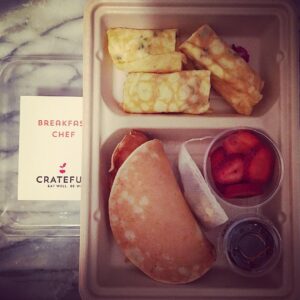 “At Crateful we not only use high-quality food but we also strive to hire the most talented personnel from the executive chef to the line cooks.  To show you the importance of having excellent kitchen staff, keep in mind that in industrial food preparation each line chef prepares one thing: one cooks the meat, the other one makes the fish, one the veggies, another one the pasta etc. Therefore, if you don’t have the best chef in every line, the overall result is mediocre. We pride ourselves of having great staff from top to bottom. “

In the US, a good product is unlikely to succeed without great marketing behind it. Emanuele, being a savvy entrepreneur, is well aware of it.  In fact, Crateful takes full advantage of the vicinity with Hollywood celebrities to organize cooking classes with actors such as Emmy Rossum (Shameless), Vanessa Hudgens (Disney Channel), Elizabeth Olsen from Captain America and Tori Spelling. Furthermore, it relies on its Event Catering division to bring visibility to the brand and meet potential customers for its Meal Program. In a short time it has built an impressive portfolio of very prestigious corporate clients such as Vivienne Westwood, Minotti, Battistoni, Bulgari, Dom Perignon, KPMG, Snapchat, Scopely, Sotheby’s, Lionsgate and Time Warner.

The next steps for Crateful include expanding nationally, starting from opening a new branch in San Francisco in a few months, and raising Venture Capital to support its growth.

AVSI and the Epidemic of Out-Of-School Syrians in Lebanon