A Day at the Beach? No Thanks, at the Movies, with Antonioni

“Take it or leave it, modern cinema as we know it is divided into BA and AA: Before Antonioni and After Antonioni.” This is how the program of the Metrograph introduced “Antonioni X 6”, a retrospective on the Italian Maestro’s works, which took place from August 22 through 29.
The statement is unquestionably true. Antonioni’s cinema is a watershed that has marked the history of cinema: after him, nothing has been the same as before him. 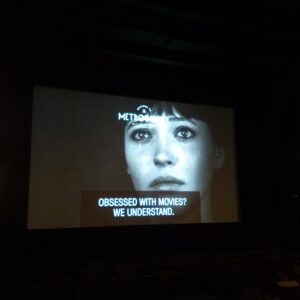 If you are keen on movies — or obsessed by them, as a funny pre-screening shot goes — the Metrograph is your mecca. There you can find any kind of thought-stimulating work, be it completely unknown or a sheer classic from master film-makers, both national and international. A retrospective on Antonioni pleasantly endorses the attention paid by the movie theater to the foreign cinematographic panorama. If such interest might have been somewhat expected from an art movie theater, the crowd of people attending the four movies La Voce di New York decided to watch was thoroughly unexpected.

Let’s keep in mind it is no freezing winter now. No sticky humid afternoons and suffocating nights forcing you in an air-conditioned indoor either. In this mild end-of-summer New York City, everything you may long for is outdoors. Not coincidentally, outdoor movie screenings are to be found all over the place, from Coney Island up to Inwood Hill Park, not to mention rooftops, or the most popular/spectacular NYC iconic locations — Central Park, Bryant Park, Brooklyn Bridge Park at Pier 1, just to name a few. You would imagine movie theaters to be almost desert: one or two lonely spectators surrounded by rows of empty seats.
That was not the case when “Antonioni X 6” was on at the Metrograph, especially for L’avventura, Saturday 26 at 4 pm. Out was the perfect beach day. In was a basically sold-out theater.
It was a sight to cheered upon. Engaged art can win over easy fun. That’s encouraging. 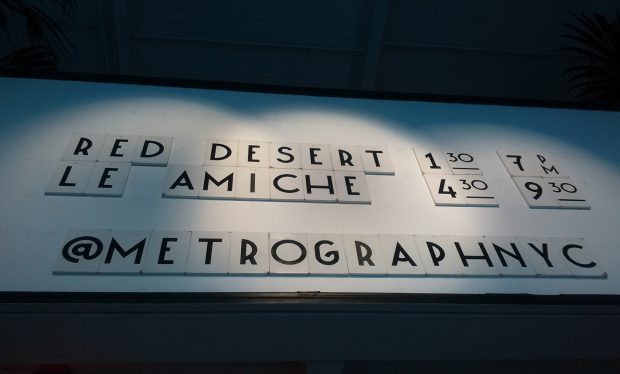 Le amiche, L’avventura, Eros, Zabriskie Point, Red Desert, The Passenger. The six films included in the retrospective offer an overview of the grammar Antonioni has developed within his cinema.
And well, his cinematographic language can make one wince. Long takes where “nothing really happens”, “dead” moments and lack of real action — these are the main criticisms leveled against the movie over the years. Not to mention the number of unpleasant facts Antonioni throws on the table, including alienation; the irreversible loss of authentic feelings; the anesthetizing cloack of malaise affecting the middle-class; a new mindset — fed by industrial progress — devouring any diverging individuality, which does not fit within that societal system, like Giuliana or Claudia, the protagonists respectively of Red Desert and L’avventura; incommunicability, not just among men and women, but also among generations, as Zabriskie Point points out; disillusionment and bitterness, as in the unhappy-ending of Le Amiche, where a love story dies when it could be born; the apathy descended upon the offspring of post-boom Italy and metaphorically climaxing in the character of Sandro in L’avventura.
Who wouldn’t wince at all this?

And yet, no pain, no gain. Antonioni’s cinema is a relentless machine blowing away any mindless, happy-go-lucky easiness that also Dino Risi fiercely criticized in Il sorpasso (The Easy Life) in those same days — 1962. Antonioni’s camera is able to draw out the dead silence, the paralysis, that leaks in an apparently carefree and yachting party, like in L’avventura, or in a blithe get-together of friends in Red Desert: there, he also superbly captures the uneasiness of a depressed woman who is unable to communicate with an hyper-industrialized automated world around her.

If L’avventura and Zabriskie Point have become, over the years, Antonioni’s most iconic and referred-to movies, it is actually worth focusing on Red Desert, his first color film, often held as the fourth of his renowned black-and-white trilogy — L’avventura, La notte and L’eclissi.
Apparently Giuliana makes the portrait of the cliché bourgeois woman: beautiful, married to a well-off engineer, mother of a young son. Yet she lives as a displaced — like the cliché bourgeois woman, we are tempted to say… — torn by malaise and gnawed by existential doubt. Surrounded by a desolating industrial landscape and by people she is unable to connect with, Giuliana struggles to survive after having attempted suicide. Though being a fish out of water, she desperately tries to fit in. She takes care of her son, she tries to put up some sort of business of her own. She even has an affair with a colleague of her husband — the cliché bourgeois woman, we said. In fact, she hopes to find some true affection in her lover, and the emotional connection she does not feel for her husband. Yet everything proves useless. Giuliana cannot conform to that reality, and to what that reality expects from her. She feels threatened, haunted: “there is something terrible in reality and I don’t know what it is. Nobody tells me” is a quote that has placed her character in the history of cinema. 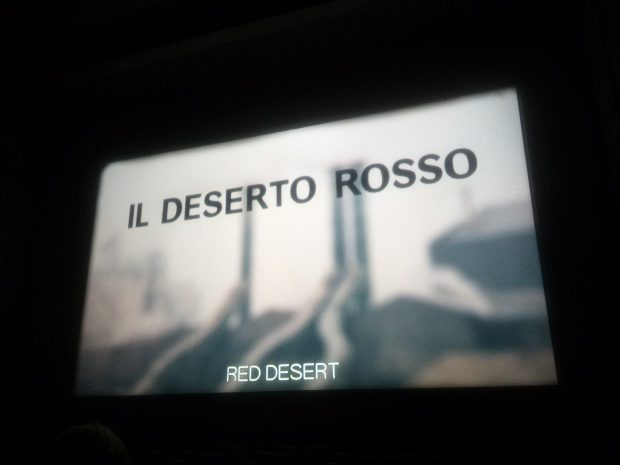 Red Desert is a deeply disturbing movie, both literally and metaphorically. Mills vomiting toxic fumes and jarring sounds, bleak electric towers looming up against chemical skies, muddy and presumably polluted fields all around. All this reminds us of a wasteland T.S. Eliot, or J.G. Ballard, might have envisioned in a dreary combination of objective science-fiction. Red Desert is unnerving as it depicts the troubles that a character living “out of the box” is doomed to go through in a society where everything looks — worse yet, proves to be — superficial, vain and standardized. The ennui arousing from this kind of societal/mental environment evokes the same existential ataraxia Alberto Moravia depicted in La noia (Boredom), his masterpiece novel, which also appeared in 1960.

The sublime interpretation of Monica Vitti, Antonioni’s muse in the 60s, was crucial for the success of the movie. The same applies to L’avventura, where she plays Claudia, friend of Anna, a woman that mysteriously disappears during a yachting cruise of friends in the Aeolian Islands; while looking for her, Claudia will end up falling in love with Anna’s lover, Sandro.
Ominous, very often disconcerting just like Red Desert, L’avventura symbolizes the disease that affects a modern society idling in its own self-fulfillment: the members of that society are so overconfident of having achieved and experienced everything that life has become a series of repeated acts devoid of any authenticity and meaning. Even love, even sex. Claudia is the only character who stands out. Her love for Sandro is unconditioned and real, as opposed to Sandro’s, for whom Claudia is just another Anna, and can be replaced with any other Gloria. L’avventura portrays a world we would rather turn our eyes away from. And that’s exactly what an artist should do. Makes us watch the unwatchable.

Although Antonioni is one of the unquestioned masterminds of Italian cinematography, it is difficult, very difficult, to trace retrospectives about his work in Italy. You can find them, say, within film festivals or insider-only, artsy movie clubs, but not within major, easily accessible movie theaters.
In New York City you get a 6-title retrospective on him. You also get an academic institution like Casa Italiana Zerilli-Marimò NYU, organizing a special screening of Blow-up in occasion of the release of its newly restored version by the Criterion Collection, as it happened last April.
Though critical towards Italy this remark may sound, it should rather be considered a praise towards this city and the actors playing in its cultural scene, who are helping generations, old and new, to access the art of a guru, and to keep it alive.
All this is priceless as much as that art.

Yet Another Pompeiian Surprise: A Nearly Perfectly Preserved Pregnant Tortoise