The Worth of Women: Feminism Started in Renaissance Venice

March is the Women’s History Month which celebrates women’s contribution to history and contemporary society. In a year that started with Trump’s inauguration, American women (or at least part of them) seem to feel the need to make their voices heard, more than ever; by any means necessary, to quote other fights. And arts and theater are definitely among those means. Even better when theater can put years under the spotlight the problems that women had to face for the past 500 years. “The Worth of Women,” the show staged by Kairos Italy Theater, accomplishes that by looking back at Renaissance Venice while being at the same time absolutely contemporary and making the female audience smile bitterly and the male audience ponder.

After the premiere at the NYU Casa Italiana Zerilli-Marimò in February, “The Worth of Women” comes back at the Gallery at Access Theater, where it will be staged from March 30th to April 9th.

The starting point is a text from the 1500s, written by a (unsurprisingly) not-so-well-known Venetian noblewoman, Modesta di Pozzo di Forzi, who, under the pen name of Moderata Fonte, became one of the few female author of the time.

The show’s premiere at Casa Italiana was preceded by a conference titled “Sirens of La Serenissima: Creative Women and Feminist Forerunners in Early Modern Venice,” organized within the month-long program that the Carnegie Hall’s dedicated to Venice. As the title suggests, the conference depicted the figures of some Venetian female writers from the Renaissance like Gaspara Stampa, Veronica Franco, Lucrezia Marinella, Arcangela Tarabotti, Sarra Copia Salum and, indeed, Moderata Fonte, whose work “The Worth of Women” was to be staged the day after on the very same stage.

Meredith K. Ray (University of Delaware), Lynn Westwarer (George Washington University), Ann Rosalind Jones (University of Pennsylvania) took part at the conference. Moderator of the panel was Virginia Cox, who not only is an expert on women from the Renaissance and professor at the New York University, but she is also particularly passionate about Moderata Fonte and she worked on the English translation of “The Worth of Women,” the same translation that Kairos used for the play adaptation.

The contemporaneity of the contents that these women from the 1500s narrate, on the stage as well as in the book, is astonishing: there is rebellion against the patriarchal system, intolerance for a subjugated condition, and an underlying awareness about the intellectual and human value of women. 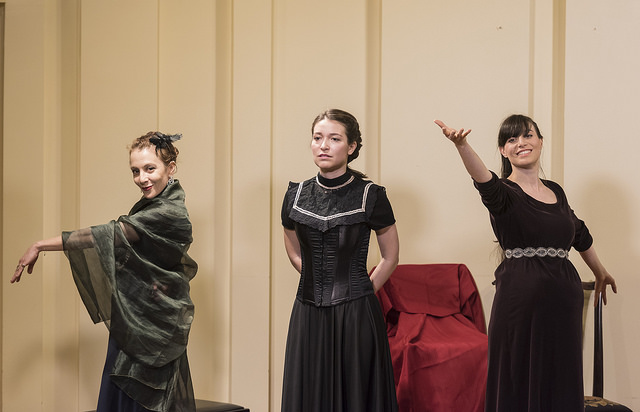 The women described by Moderata Fonte and brought to life by Kairos are not repressed women, rather realistic women (that in times become cynics and a necessary opportunist) determined to find their own place in a world where the rules are written by men. With humor and great humanity, the seven women preach equality and freedom of thought and action for all the women of that time.

In the excellent interpretation by Kairos, each one of the characters embodies a value, metaphorically represented in the stage fiction by a series of statues that the women encounter in the garden where they meet for their small proto-feminist club.

Each one of the female characters responds in a different way to the constraints of the role that the society of the time had given to women. If the audience wasn’t aware that the book was written in the 16th century, the themes treated by the author and the tone used by the seven women during their conversation could almost be mistaken for a chat among today’s women. And while the fact that Venetian women of that time were already so emancipated – at least in their thinking – is astonishing, as discussed at Casa Italiana, what is even more striking is that the difficulties and the frustrations of those women are the same ones women have to deal with today.

The criticism of the patriarchal society is fierce and doesn’t leave out topics that at the time must have sounded scandalous. They talk of violence against women, both psychological and physical, of neglected love, adultery, jealousy and absurd impositions and stern rules that wives and daughters had to follow. They also talk about sex, about the possibility that a woman might not get married or have children, hence they talk about free will, and control on one’s own body.

The recurring question is “why?” Why men don’t respect us despite everything we do? Why can’t we be worth it? Why, despite our dedication, faithfulness and the continuous sacrifices for the best of the family, women are still just their husbands’ shadow, a badge of honor or of mockery, and never on par with men? It is a cutting work, written with shrewdness and courage, that hits the target. And Kairos’s interpretation of it manages to be light and fun, even while narrating this women’s harsh conditions. 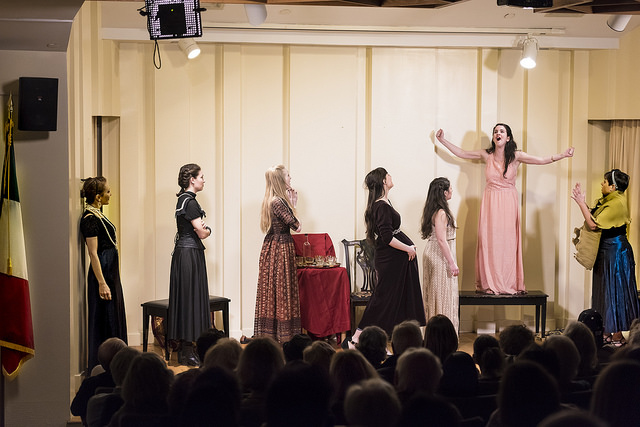 When hosting the premiere of the show, Laura Caparrotti, founder of Kairos Italy Theater and co-director of the show along with Jay Stern, dedicated the evening to Baroness Zerilli Marimò, founder of Casa Italiana and great woman. It was Casa Italiana that proposed to Kairos, its theater company in residency, to stage the translation by Virginia Cox. Completing this matriarchal synergy, the music of the songs that accompany and underline some parts of the text was written by New Yorker based composer Erato Kremmyda and the lyrics are by Maggie-Cate Coleman.

The actresses on the stage, other than Caparrotti herself, who interprets the wise woman of the group, are Carlotta Brentan, Tali Custer, Aileen Lanni, Marta Mondelli, Irene Turri and Annie Watkins. After the premiere at Casa Italiana, the actresses confessed that during the show rehearsal, even if they’re playing characters distant from their own personalities, the identification temptation and the risk of overlapping their personal and biographical experience to the role were always around the corner. A genuinely feminine mechanism, one would think.

The stage version of “The Worth of Women” shows what women have been enduring for too many centuries, and, in fact, there is still a lot to say on the female condition. The show also proves that Italian literature of the 1500s can still be very modern and revolutionary and that today’s Italy (as today’s America) could learn something from the Early Modern Venice. But, above all, “The Worth of Women” narrates that when a group of women get together, no one can stop them.

The Worth of Women: Feminism Started in Renaissance Venice