A Nation and its Movies: Italian Political Cinema

A book explores the political dimensions of contemporary Italian cinema

"The Working Class Goes to Heaven", by Elio Petri.

Professor of Italian and Comparative Literature at the College of Staten Island and the Graduate Center CUNY, Giancarlo Lombardi was there to illustrate his work, along with other three esteemed professors and scholars, Gaetana Marrone Puglia, David Forgacs and Gianni Riotta.

In spite of the cold weather and Thanksgiving looming close-by, the hall at the Institute was crowded with listeners and interested people, who spiced up the conversation with a short but engaging Q&A after the presentation.

Italian Political Cinema explores the political dimensions of contemporary Italian cinema by looking at the topic of contemporary political film from a variety of perspectives and by focusing on the most prominent directors currently engaged in this filone, as well as on case studies. By bringing together a wide array of critical positions and research from Italy, France, the Netherlands, the United Kingdom, Canada, and the United States, the work succeeds in offering an international perspective on the topics at stake. 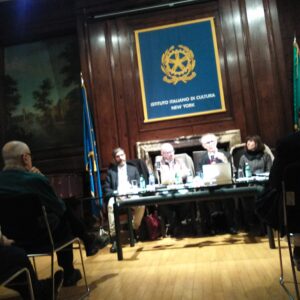 “It has been created for the academia”, commented Lombardi, “but it also addresses cinema-lovers and readers outside of academia, as it provides an accessible entry-point into a subject that continues to attract critical and cultural attention.” Professor Forgacs, Zerilli-Marimò Chair in Contemporary Italian Studies, further emphasized the double nature of the book: a rich resource for teaching, but also a repository of information for movie-addicts who wish to delve into Italian political movie history.

Gaetana Marrone — Acting Chair of Italian and on the Film Studies Committee at Princeton University — has actively collaborated to the volume. She has revisited the work of a selected group of early masters of political cinema such as Bellocchio, Bertolucci, Lina Wertmüller, Elio Petri, and the movies which put the worker and working-class on the foreground — Mimì Metallurgico ferito nell’onore (The Seduction of Mimi, by Lina Wertmüller, 1972), La classe operaia va in paradiso (The Working Class Goes to Heaven, by Elio Petri, 1975), and I pugni in tasca (Fists in the Pocket, by Marco Bellocchio, 1968), to name a few.

Member of the Advisory Council of the Department of French and Italian at Princeton University, and renowned Italian journalist, Gianni Riotta admitted that reading the book was a journey into Italian political cinema. He underlined how the link between politics and cinema has also been personal in some cases, and has concerned the very life of some Italian political figures, like, for instance, Walter Veltroni — now a film-maker — and Communist Party Leader Pietro Ingrao, who had enrolled in Centro Sperimentale di Cinematografia back in 1935.

Riotta also threw on the table a challenge he believes Italian cinema has still to face: to really capture Italian terrorism experience and Brigate Rosse in a feature film. He further recommended that, in such a time where Italy has lost cohesion on multiple fronts and gained alienation, we should rummage Nanni Moretti’s Caro diario to find the keys to understand two decades of Berlusconi’s politics.

Lombardi added that another target pursued by the book was the degree of politicity, politicità, that Italian movies have been featuring up to now, “a question equally pertaining to form, content, and to the productive system in which the works to be analyzed are embedded.”

Lombardi sounded no deluded Walter Mitty, though. He knows how unlikely it was to put together a survey like this — research works took him and his colleagues three years — and to include every single recent outcome of the Italian political movie scenario. Academy-nominee Fuocoammare is unfortunately not there, sadly reminded us the author, since the book came out just before the movie was released. However, readers will not be left high and dry: a full chapter deals with immigration.

I say that cinema, like any form of art, is a restless animal — you cannot hold it in a 400-page paper cage. Thus, we encourage Professor Lombardi to plan a second volume, including what Italian political cinema has not tackled yet, such as Renzi government or Movimento Cinque Stelle.