Amara Lakhous and his Migrating Languages

They have different cultural roots and speak English with different accents but a conversation on migrating words creates a common idiom among them. Amara Lakhous, award-winning writer, author of five novels; Michael Reynolds, the editor-in-chief at Europa Editions; Ann Goldstein, an editor at The New Yorker and a prominent translator of Italian literature, addressed an audience of over 150 students, professors and community members at Montclair State University on April 13. Presented by the Inserra Chair in Italian and Italian American Studies (Department of Spanish and Italian) in collaboration with the Arabic and French programs (Modern Languages and Literatures) and moderated by Professor Teresa Fiore, their conversation explored such issues as multiple language competencies and literary and cultural translation around the evening’s theme: words.

Amara Lakhous is a unique case in the contemporary literary landscape as he writes in both Italian and Arabic, and is a translator in his own right. Born and raised in Algeria to a Berber-speaking family, he learned both Arabic and French while growing up. At the age of twenty-five, he moved to Italy as a political refugee: he found his mature literary voice in Italy, a country where he has lived until his recent move to New York six months ago. He published his first novel Un pirata piccolo piccolo (Bedbugs and the Pirate) in 1999, followed by his bestseller Scontro di civiltà per un ascensore a piazza Vittorio (Clash of Civilizations Over an Elevator in Piazza Vittorio) in 2006, a book that won him the prestigious Italian prizes Flaiano and Racalmare – Leonardo Sciascia. His other titles include Divorzio all’islamica (Divorce Islamic Style, 2010) and Contesa per un maialino italianissimo a San Salvario (Dispute Over a Very Italian Piglet, 2013). 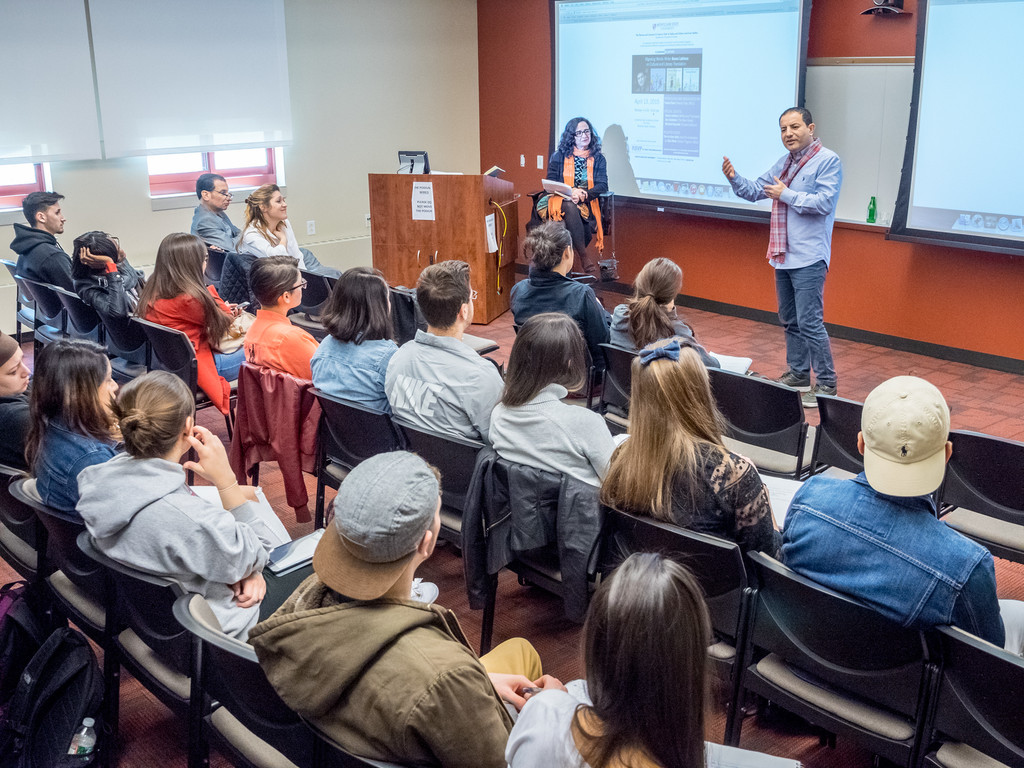 Amara Lakhous during a seminar at Montclair State University

Through these experiences, Lakhous has provided himself not only with the tools to transcend language barriers, but also a unique perspective on multi-cultural identity that he explores through the prejudices and biases of the characters of his books. Indeed, his multilingual creative ability is Lakhous’ “act of rebellion,” a way for him to break from restrictive linguistic and geographical boundaries. For Lakhous, a story is the same across all languages, but some elements can be lost in translation; so Lakhous instead rewrites his stories in the languages he knows. “The best way to be original is to mix many languages,” he said. This unique approach to writing his novels – writing to create, as he calls them, “twin but not identical stories” – allows him to communicate the basic idea of the novels while gearing them towards specific audiences. Students experienced this approach first hand as two passages of one of Lakhous’s novel were read out loud in both Italian and Arabic, a hands-on interaction that Lakhous had provided previously with his classroom lecture at Montclair State on April 6, moderated by Professor Gina Miele. His Italian versions include references to Italian politics and popular culture that would be lost in the Arabic version, and vice-versa, but, significantly, he has been able to “Italianize the Arabic and Arabicize the Italian,” allowing him to incorporate both worlds in each version of his novels.

The Italian world Lakhous came to learn was that of the carne (flesh in Italian), the language of the people. Learning colloquial Italian allowed Lakhous to gain a different perspective on the culture of which he was trying to become a part. “Language is very important to define an identity,” Lakhous said, “and for this reason I can say that I’m Italian.” Perspective is thus of unique importance in Lakhous’s works, which deal directly with the conflicts and differences of varied viewpoints with a singular significance. 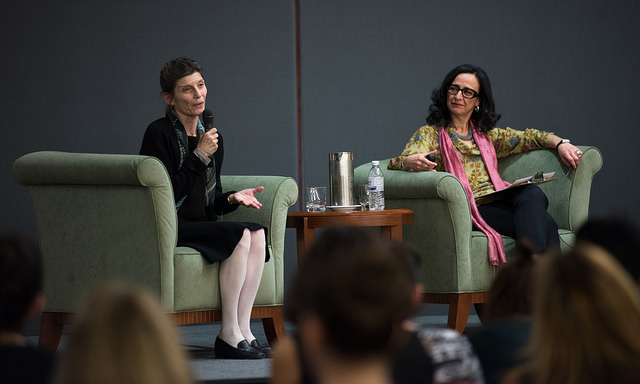 As a translator of Lakhous’s books from Italian, Ann Goldstein offered a different view of learning languages. Goldstein’s focus with Italian came through the carta (paper in Italian), the written word: “Unlike Amara, I don’t have the lingua di carne because I started with Dante.” It was her interest in reading – as it was Lakhous’s love for Italian cinema in his youth – that spurred her to study and learn Italian. Dante Alighieri’s works along with other quintessential texts in the Italian literary canon, informed her perspective. Goldstein and Lakhous know the same Italian, and yet there is a difference in how each of them is attuned to it; for the former, there is a treasuring of the formal language (which she agilely adapts to such authors as Primo Levi and Elena Ferrante). The latter, in contrast, adopted the ever-changing language of the layperson. Yet, it is in the balance between these two approaches that Lakhous’s translations come to the English-speaking reader. As words migrate, translations become bridges. 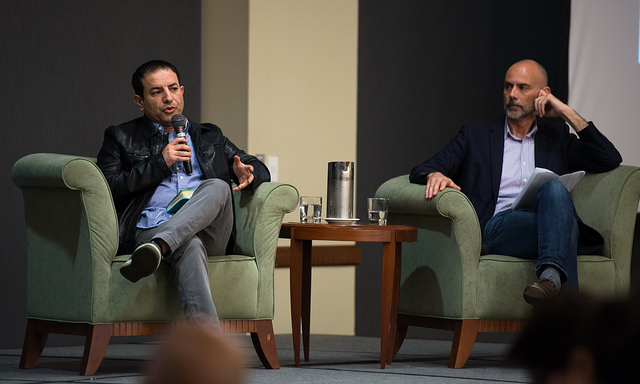 Michael Reynolds is a translator himself although his role as a shuttler of words from one language to the other plays out primarily in his activity as editor of a publisher that supports foreign literature in translation, a relatively small portion of the U.S. book market in reality, despite the linguistic and cultural diversity of the country. Whereas Lakhous and Goldstein both came to the Italian language by some form of desire, Reynolds was forced by necessity to learn it when he moved to the outskirts of Rome. Reynold’s experience of learning Italian is in a way a combination of Goldstein’s and Lakhous’s. He learned proper pronunciation through Italian music – whose singer-songwriters “enunciate really well” – and he learned to read through the free newspapers on the trains. It was a difficult experience, resonating still in his attempts to speak in the appropriate “register” sometimes, as he amusingly confesses, but it was less so than is the process of translation, which Reynolds called “torturous,” as it implies multiple skills and intensive sessions of work. He prefers the role of the editor of translations, instead. Indeed, Goldstein herself recognizes that it can be a “frightening” process, while for Lakhous it is simply “fascinating.”

The translation process that Lakhous, Goldstein and Reynolds explored during the conversation is not just focused on language: it involves a translation of culture at all levels, including apparently trivial experiences. In his closing remarks and with his usual warm humor, Lakhous shared his practice of learning about American culture by going to Central Park, a place where he faces unexpected encounters from the perspective of an Italian of Algerian origin; such as the encounter with dogs wearing shoes. It is not that Lakhous is simply taken aback by shoe-adorned canines; it is in the discovery of a culture's tangible workings that he reaches a different level of consciousness and he positions himself as a carrier of different views eventually expressed through different languages. Like Goldstein and Reynolds he migrates from one language to another along ambiguous roads, emphasizing not difference but instead the connections among tongues, national identities, and cultural perspectives that make communication possible.

Filmed and edited by Matteo Minasi of Cinemattic Underground.

Amara Lakhous and his Migrating Languages

Draghi: Protect National Recovery and Resilience Plan From the Mafia

They Say Italy is Ready to Conquer Libya. Really?