The most common form of street art, which has inspired our present reflections, was born in the beginning of the ‘70s in New York where, within a few short months, the youth’s artistic energy worked in the favor of culture and exploded. Artists like Keith Haring and Jean Michel Basquiat introduced this form of art to the galleries for the first time in the ‘80s, but the real revolutions happened on the streets, on the facades of abandoned buildings in seemingly inaccessible areas to the urban passerby, where street art emerged as a critique on political events of the times and activated urban and social transformation. 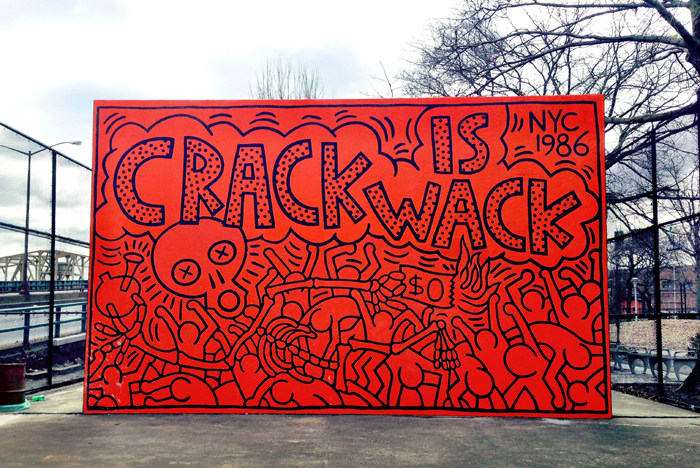 Crack is back by Keith Haring in New York

The famous graffiti Crack is Wack was created in Harlem by artist Keith Haring in 1986 without any permissionwhich led to the artist’s arrest and destruction of the work. Only a short time after, recognizing the positive social impact that the murals could have on the entire neighborhood, the Public Parks Commission of New York invited Haring to repaint one which had the same message and that today has given the name to that very park.

New York City today continues to be a sort of mecca of creative talent of street artists and is a testament to the change that is gradually taking place: originally an instrument to mark the territorial boundaries of the urban youth, street art is today seen by many as a way of creating urban regeneration and beautification.

Followed by a global trend, the street art phenomenon in Rome is rapidly on the rise. As such, the various parties impacted – citizens, artists/creators, the art world, the university, the media, and private and public entities – are searching to define street art and understand what its potential is at the urban scale.

An exemplary case can be seen in Rome, which today stands as a protagonist for urban initiatives. Rome is known as an historical city, where history has slowly built all of its neighborhoods, but there is an exception: that of Shanghai, born in a cold morning of May 1933 and rising in a few short weeks. No, we are not talking about the Chinese metropolis, but of the roman town of Tor Marancia located along Cristoforo Colombo Street, established by royal decree in the Fascist era and built with cheap materials to accommodate the displaced people from the big demolition in the historic center. This cluster of housing rapidly grew with immigration from the countryside and living conditions quickly became unsustainable. For years, frequent flooding transformed this area into swamps, giving the area to name of Shanghai. After the war, the situations of the neighborhood worsened and was so unsanitary that it was decided to demolish it to the ground and to entrust ATER (Azienda Territoriale per l'Edilizia Residenziale del Comune di Roma) with the construction of housing projects that is today known as Tor Marancia. 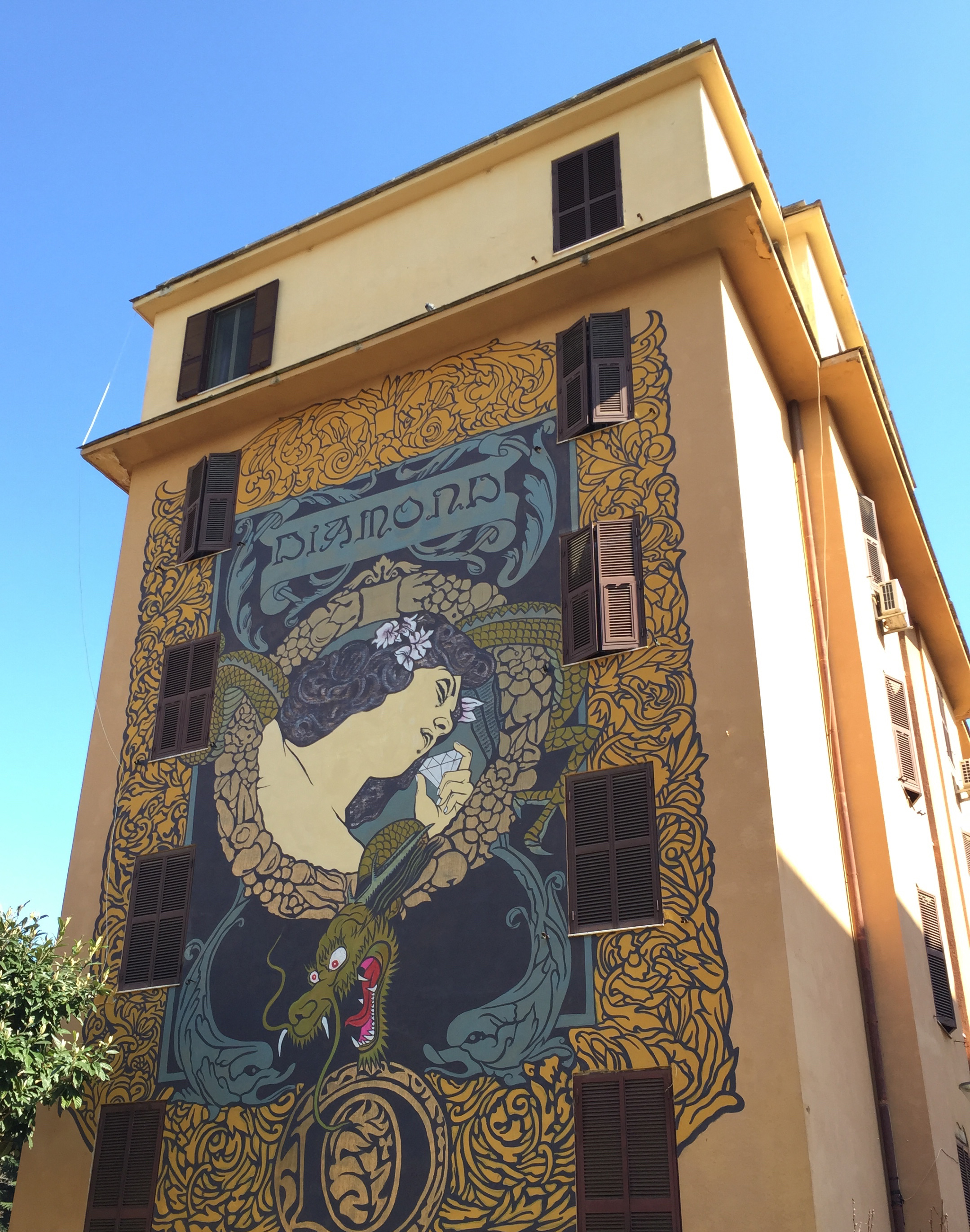 It’s precisely one of these lots, the number I, that is being celebrated by newspapers as an example of urban revival; the demonstration of the regenerative power of art and the beauty that can be reclaimed from marginal towns. Thanks to the project Big City Life financed by the Fondazione Roma and created from 999 Contemporary, the gallery that contributed to the making of Rome as one of the capitals of street art, with the collaboration of the Comune and ATER which have spurred a great and ambitious program by completing, in the heart of the town, a 7-week event in which 20 artists from Italy, France, Germany, Portugal, Hong Kong, the United Kingdom, the United States, Argentina, Australia, and Chile painted 20 facades 14 meters high for a total of 2,500 square meters of artwork.

Today, Rome has yet another museum to visit which exhibits world-famous artists. To visit it, one has to “descend” into Tor Marancia, just inside to the courtyard garden. What makes this even more fascinating, above and beyond the sheer number, is the strong bond that the works and the artists have created with the architecture and the social context in working closely with the residents. Every “piece” seems to tell a story of this occidental “Shanghai”: from the vaguely Art-Nouveau face painted by Diamond and decorated with a large Chinese dragon to the Byzantine Madonna depicted by Mr. Klevr 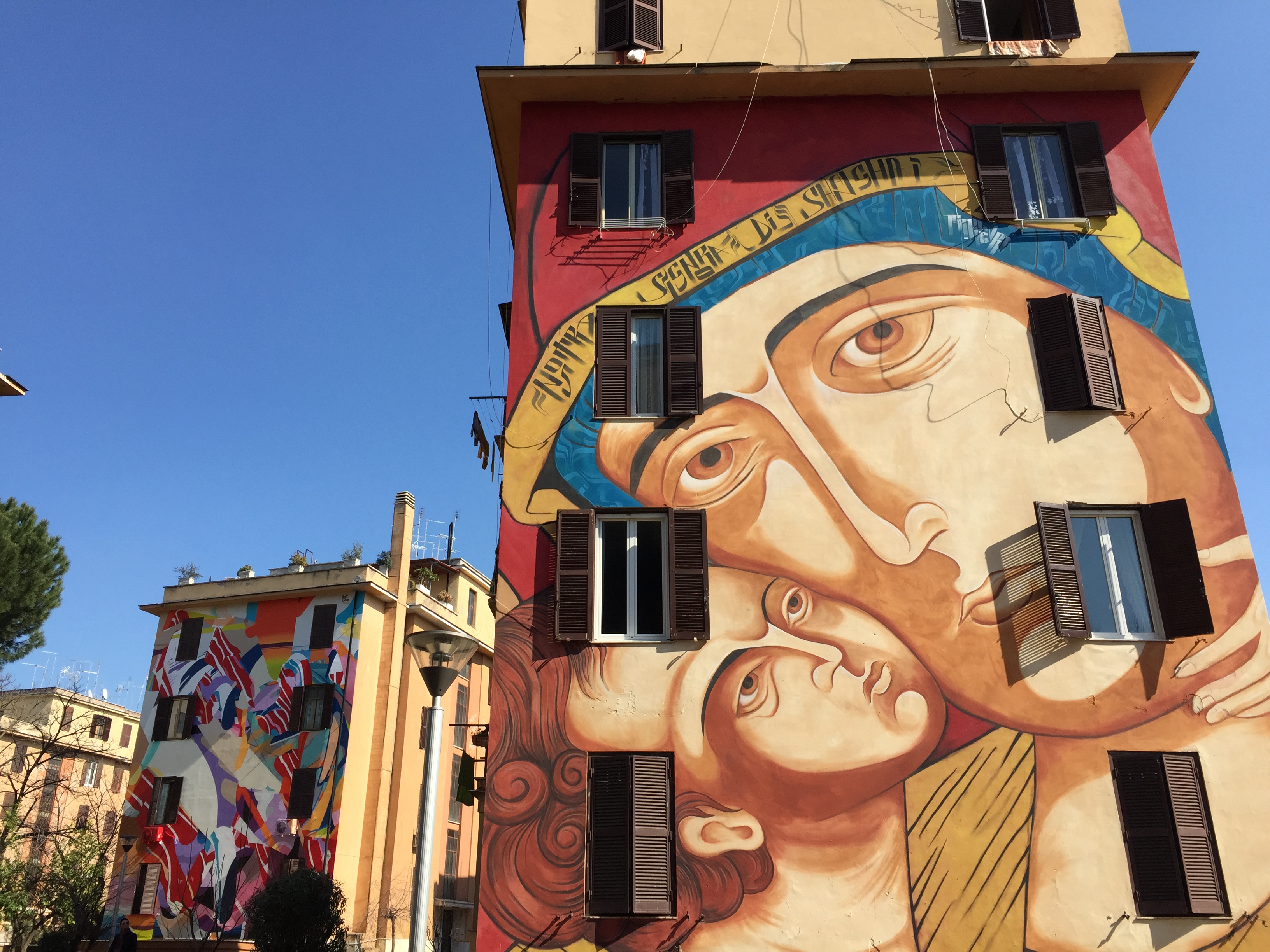 Our Lady of Shangai by Mr. Klevr

with the scripture “Our Lady of Shanghai”. And there are also the stories of the neighborhood, with Lek & Sowat who were inspired by Andrea Vinci, a disabled boy who could not leave his house because there was no elevator in his building and so dedicated Veni, Vidi, Vinci to him; or little Luca, the boy who died playing ball in the courtyard which Seth poetically represented climbing a ladder looking up at the sky over the buildings. There is no rhetoric nor melancholy thanks to the vivid colors that seem to reverberate serenity. There is the amazing work by Jericho, a young artist with extraordinary talent, which references Michelangelo’s Creation of Adam painted with a palette of colors worthy of Van Gogh. The day of the inauguration, all of the art works, with their diverse styles and language, seemed to bring the charm of Roman spring from the garden to the walls of the houses, accentuating the intention for the rebirth of this neighborhood.

Amidst the initial enthusiasm, there rise some dissonant voices that warn the inhabitants of Tor Marancia of the risk of gentrification, one that marginalized neighborhoods often run following initiatives such as these, which ultimately tend to increase the value of the area, attracting speculators who gradually replace the existing fabric of the neighborhood with new young investors. Even more ambiguous though was the attendance of the institutions on the day of inaugurations, who did not mind occupying the front row after years of tenaciously denouncing the artists as vandals. Though found in cities globally, the practice considered “street art” is still considered illegal. Only when granted "permission", the traditional form of graffiti is technically considered public art. Without this, the street artists commit acts of vandalism on public or private property and are considered, by definition, criminals. The authorities have finally begun to acknowledge the opportunity of this art form, using street art to restore neighborhoods.

Street art is finally re-known for its regenerative effects on neighborhoods and its benefits on the urban environment. The next revolution to come is not in painting techniques, but in how the institutions can do for these citizen-artists to use the walls of the urban public space as their canvases: a shift from that which has always been seen and considered as an illegal act, a form of rebellion of appropriation of urban space, to a new paradigm where street art is seen as a unique opportunity to enhance the city while allowing artists and creators to publicly showcase their work. But even today, unfortunately, behind these beautiful artworks on the facades, the houses continue to crumble, no elevators, and life has remained the same. Art is narrative, criticism, and reflection of these issues, but there is a lot of work that needs to be done to advance them, extending to the realm of politics, governments and institutions.