The straight stretch that begins from Washington Square and extends north through Manhattan taking the name of Fifth Ave, is probably the most dazzling and well achieved celebration of the American dream. Astor, Rockefeller, Trump, Rothschild, Vanderbild: basically every aristocratic business family of the last two centuries left its mark on this Avenue.

In accordance with this tradition, during the 40s, the old Solomon Guggenheim begins the research of a new lot where to build a new museum, choosing a spot right on fifth Ave – not far from the Met – on the stretch of road that would have been named later on as Museum Mile. 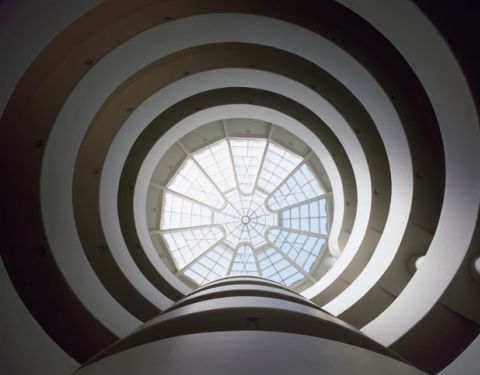 That of Guggenheim was a family who became very rich within the brief time of a generation: the family emigrated from Switzerland halfway through the 1800s and made its fortune in Philadelphia. The two rich and enterprising scions, the brothers Benjamin and Solomon, decided to celebrate and legitimize their fortune by investing in art, the purpose for which the patronage of art suited perfectly.

Unfortunately Benjamin didn’t have the time for it, since he decided on the night of April 12th 1912 – after being told that the boat he was travelling on would sink –to wear his tuxedo and, as a real gentleman, he left his spot on the lifeboat to women and children. For the record, the transatlantic on which he was travelling was the Titanic.

Still his daughter Peggy fulfilled some years later the will of Benjamin by indissolubly linking their name to art.

On the other hand Solomon had the chance to dedicate the last part of his long life to the purchase of innumerable works of art. With the help of his inseparable Hilla Von Rebay, he bought extraordinary paintings from the authors themselves, among whom Kandinsky, Dalaunay, Leger, Monholy-Nagy, Gleizes and especially Vauer. Soon the works of art started to accumulate on the walls of Guggenheim’s Hotel Plaza suite, where he lived. Finally in 1937, a foundation was established and some years from that date the most important American architect – Frank Lloyd Wright – was put in charge of the design of a new and outstanding museum: along 5th Avenue, at last, the excellent art collection that would celebrate and would make the Guggenheims’ name everlasting/immortal could be exhibited.

Even before to be a museum itself this new building had to represent a symbol, a monument to a family and its architect. A shining jam along the Millionaire’s row, elevating Solomon to the aristocratic class, on the same level of all the other renowned families and their impressive buildings. 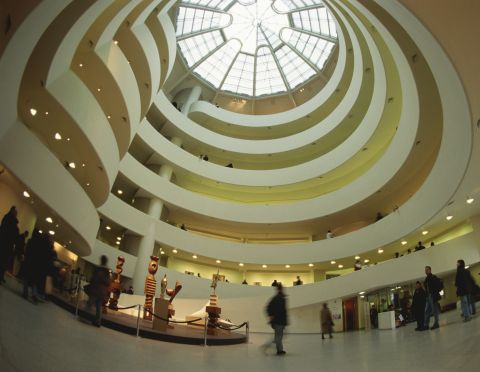 Wright’s genius came up for this specific purpose with a relatively small building compared to the close and humongous skyscrapers; but at the same time iconographic with its modernistic simplicity.As of today, the Guggenheim museum is one of NY’s symbols. The museum, according to many apologists, can claim the merit of revolutioning the 20th-century concept of gallery. After being taken to the top from the elevators, visitors would admire the artworks by easily walking down the spiral ramp, through which the art collection would be arranged. Natural light would light up the artworks, reaching the “concrete tunnel” through an inspiring skylight. However, talking about this masterpiece and its architect is almost pleonastic, since quite a bit of essays and work have been already dedicated to this matter by important experts.  And yet there is an aspect of this architecture that – even if not new – has been undoubtedly underestimated: if on one hand the conceptual innovation that it has produced is unquestionable, on the other hand the formal debt that it has is undeniable. Of course it is, because – if one wants to be really precise – its form is a really close relative of – we can almost say it’s the daughter – of a relatively close in time Roman work: the entrance stairway of the Vatican Museums. 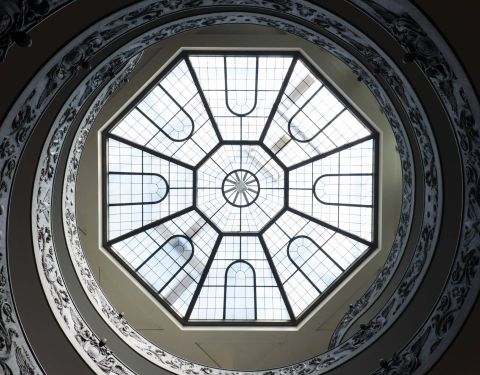 Architectural historian, Vincent Scully was the first one to suppose that Wright had the chance to visit the Vatican museums during the trip he took to Italy in 1956, in correspondence of the final busy period through which the architect drew the definitive lines of the museum. The Roman work – which was designed by the little known Giuseppe Momo- appears to be almost the opposite of the New Yorker one: the Big Apple work is so explicit, modern and exhibitionist while its Roman antecedent is modest, classical and introverted. Whereas Taliesin’s master had to celebrate the recent prestige of an extremely rich family, Momo had been asked from the Pope of respecting the past and not to modify in any invasive ways the ramparts of the Vatican Walls.

After graduating in Turin, Momo moved to Rome immediately after the Lateran Treaty and accomplished many assignments as the Architect of the Reverend Fabric of San Peter. The project of the Vatican Museums new entrance was commissioned by Pio XI in 1929 and the Pope himself was directly involved in the drawing, sometime dictating modifications. For example in a first version there was an external ramp, but the Pope suggested to build a new entrance by digging – as if for a well – into the embankments that were constituted by the ancient ramparts. Momo took inspiration from the Saint Patrick Well – designed by Sangallo in Orvieto – and proposed a really interesting solution. It consisted of a double spiral ramp that could allow the flows of incoming and outgoing visitors to cross each other without direct contact. The absolutely modern technology consists of reinforced concrete with a bearing wall and jutting ramps that reach up to three meters, but still keeps a classical-style thanks to the bronze rail and the marble coating. On the top of it – as on top of the Guggenheim – there is a skylight revealing the unequivocal paternity – at least formal paternity – of Wright’s project. 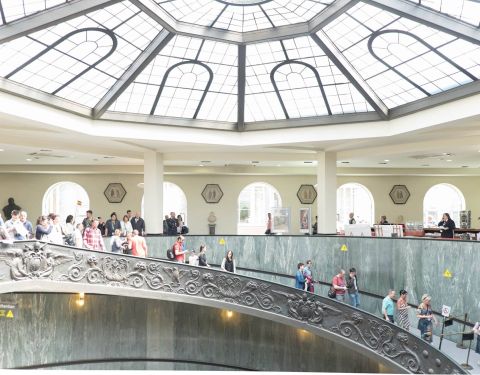 It is of course impossible to ignore the fact that the grandeur of the New Yorker museum goes beyond its architectural form, extending to the relationship between visitor and artwork. The Vatican ramps ‘only’ represent a technological solution – a wonderful and absolutely elegant solution – in order to get over a difference in level without fanciful typological ambitions, which can be found in Wrights work. Nonetheless, it is legitimate to tribute to Giuseppe Momo some credit in the history of modern art. Opposed to a vision of architecture and art progression as a mere result of revolutionary intuitions of rebel geniuses, innovation comes from a continuous and constant process and originates from the observation and imitation of ancient models and their evolution and interpretation.  Without Momo’s little known masterpiece, the Guggenheim would have probably and regardlessly been a brilliant work, but it would not have become the icon that turned the spirit and memory of Salomon Guggenheim into a symbol of the 20th century.