Across the globe, low-wage workers joined the fast food labor campaign known as Fight for $15 with two demands: a raise to $15 dollars an hour and the right to unionize. In the worldwide protest, which organizers claimed was set to be the largest protest ever, forty countries and two hundred United States cities participated. A tweet from Fast Food Forward, an associated twitter page of the campaign, states that at least 30,000 were participating in New York City alone. Later estimates indicated 15,000 participants.

The Fight for 15  website boasts a large section of newspaper reports regarding the movement. At the time of this article’s writing, #Fightfor15 is trending on twitter. But, an inside look can tell us more about why the campaign has such broad appeal.

At the rally on Wednesday there were musical performances and speeches advocating for unions and an increase in minimum wage for all low-wage workers. Fast food workers and advocates have highlighted unfair treatment and poor working conditions. Sanitation is often a problem in fast food kitchens, which are also notoriously unsafe work environments. Grease can easily spill on the floor causing people to slip, there is often a shortage of space, and kitchen equipment can cause serious burns. Pressure from management to work faster in restaurants that are filled with hurried customers creates a recipe for accidents. To make matters worse, a survey by Hart Research Associates states that 33% of fast food workers burned at work are told to treat their injuries with condiments  such as mustard and mayonnaise, and that four out of five fast food workers were burned last year. 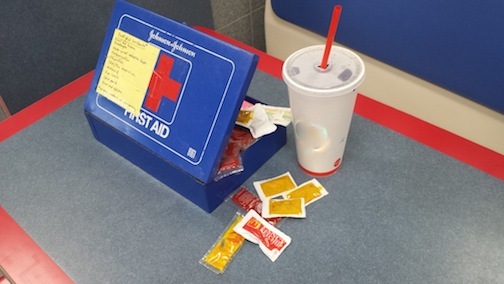 A satirical recreation of safety protocol in a fast food restaurant.

Due to low wages, workers are often forced to supplement their income through food stamps and other government programs. McDonald’s even has a helpline called “McResource” that helps employees get public assistance, but franchisees have to pay the company for the service. When contacted for this piece, three McDonalds employees declined to comment, in compliance with company policy.

Esia, a young woman who spoke to La VOCE at the Wednesday rally, says that she struggles every day. Currently employed at a Wendy’s, where she has worked fulltime for two years, Esia makes $8.75 an hour. Though she is not on government assistance, she shares her apartment with a roommate to help make ends meet. “After paying for food and day-care, getting paid bi-weekly; it’s like you’re basically working for nothing.” Yet, she isn’t striking against her employer. “I can’t strike. I have a baby to take care of.” Esia was at the rally with the Royal Knights Marching Band. She plays the cymbals and drums.

Another participant, Sakhr, worked in fast food for almost a year as a counter person in a deli. He made $8.00 an hour, but said that it wasn’t liveable. “I couldn’t go to school and work there. It was a struggle.”

One speaker went to lengths describing the low wages of adjunct faculty and made the case that low pay has a negative effect on higher education. Robert Reich, a prominent American political economist, said in a Facebook post about adjunct faculty “They're the second-class citizens of academe — with no job security, few if any benefits, and they work for essentially peanuts.” 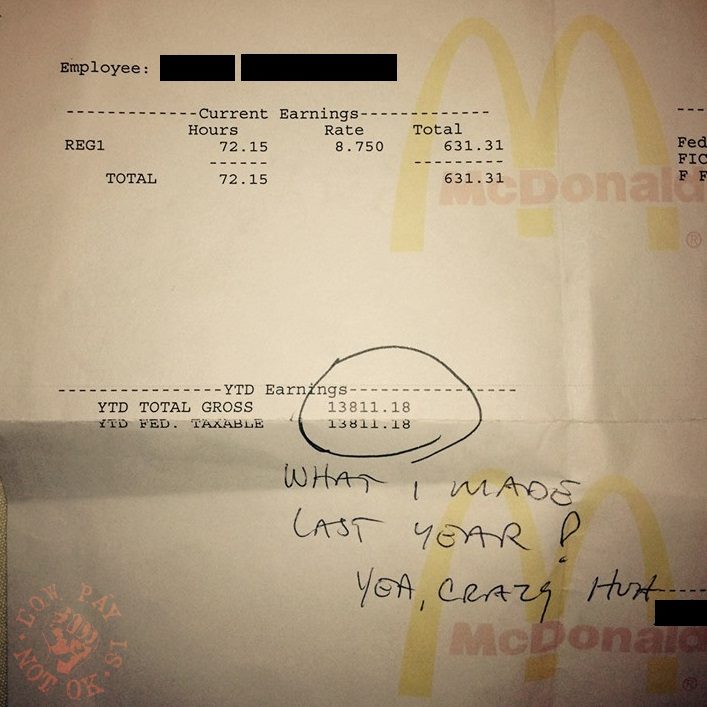 The rally and march had all the typical signatures of a New York City social movement. Fliers were passed out alongside radical newspapers and pre-made signs. Participants often dressed their part, including a large group of plumbers, and an even larger contingency of home healthcare workers under United Healthcare Workers East. One such healthcare professional, Max, found out about the rally through his union. His union, he said, is not striking, but protesting. He said that the usual starting pay for such workers is around $8.00 an hour, and that he knows many in the field making less than the coveted $15.00. On his experience in what he sees people doing to compensate for not making a living wage, Max said, “They are working three or four jobs and still not making a living because the other jobs don’t pay well either.” When asked what can be done to fix this, he said matter-of-factly that “Congress can raise the minimum wage.” He went on, “In New York, there are roughly 15,000 home healthcare workers that are not represented by more than one union.” 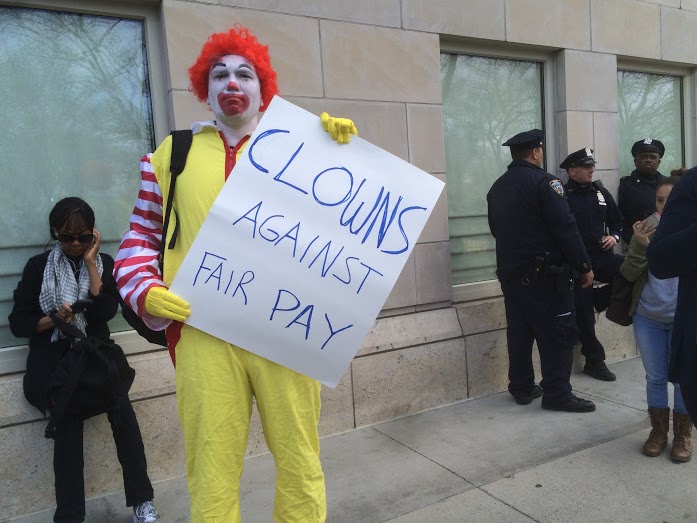 McDonald’s, sensing the momentum of the movement and anticipating the April 15th demonstrations, announced that it would increase the starting pay of workers at company-owned restaurants to $1 above the local minimum wage, and also provide some paid time-off for those workers. “These two benefit enhancements apply to McDonald's company-owned restaurants, which represent more than 90,000 employees and about 10 percent of McDonald's restaurants nationwide,” the company stated in a press release. They went on to say, however, that “The more than 3,100 McDonald's franchisees operate their individual businesses and make their own decisions on pay and benefits for their employees.” At the time, McDonald’s was making the case before the National Labor Relations Board that they are not a joint employer with their franchisees and therefore not responsible for those employee’s wages. The NLRB, however, stated, “Our investigation found that McDonald’s, USA, LLC, through its franchise relationship and its use of tools, resources and technology, engages in sufficient control over its franchisees' operations, beyond protection of the brand, to make it a putative joint employer with its franchisees, sharing liability for violations of our Act.”

Ideologically, Fight for 15 overlaps with other mass demonstrations that have taken place in New York City in the recent past. #BlackLivesMatter matters for #Fightfor15 because African Americans are over-represented in the fast food sector and other low-wage sectors.

But, Fight For 15, a labor campaign at heart, probably finds most of its roots from Occupy Wall St., which was more than anything a protest against income inequality. 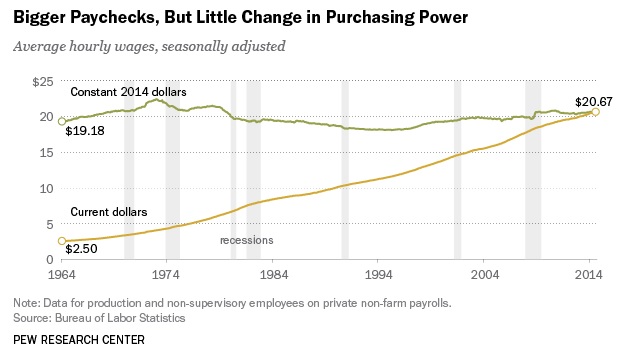 As we saw with the Black Lives Matter movement, civic involvement can be a good indicator of what matters to the voting public, and it follows that elected officials pay attention. After the deaths of Michael Brown and Eric Garner, the Department of Justice made moves to introduce body cameras and reformed asset forfeiture, among other measures. What has been expected to be the largest strike in history will force politicians to enter the dialogue. The dismal growth in wages  for typical workers in the past three decades have been enough to sound the alarms. Since 1979, the overwhelming majority of workers’ hourly wages have either stagnated or declined. On the national trend of wage stagnation, Pew Research Center stated on their website, "According to the BLS, the average hourly wage for non-management private-sector workers last month was $20.67, unchanged from August and 2.3% above the average wage a year earlier. That’s not much, especially when compared with the pre-Great Recession years of 2006 and 2007, when the average hourly wage often increased by around 4% year-over-year."

Hover over the map to see figures for each state.

Indeed, a number of politicians have already made note of these issues. During the 2015 State of the Union, President Obama called on congress to raise the federal minimum wage  to $10.10 an hour (it is currently $7.25 on the federal level and $8.75 in New York State).

Hillary Clinton, who recently announced her candidacy, has come out in support of workers seeking a living wage though she hasn’t made any explicit proposals. According to an aide, she “wants to have a conversation about the right target and timeline” in raising the minimum wage, The Times reports. 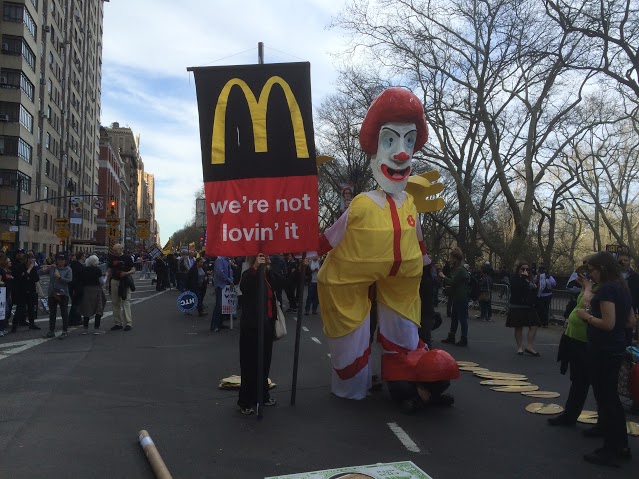 Voices critical of the Fight for 15 say that the minimum wage should not be increased because such low-wage jobs are temporary, mostly for teenagers and don’t require real skills. However, according to the left-leaning think tank Center for Economic and Policy Research, roughly a quarter of fast food workers have some college education, and over half of the workers are over the age of twenty.

Marco Rubio, a Republican presidential candidate, doesn’t believe in raising the minimum wage. In an interview  with Jon Stewart, the host of The Daily Show, Rubio advocated expanding the earned income tax credit, making it monthly and improved for single workers. He is advocated a government distributed wage enhancement, saying that the theory is “I’d rather have someone working and subsidize that through the earned income tax, than have them collecting long-term unemployment.” He went on, “Ten dollars and ten cents will not raise you out of poverty.” He also raised the concern that raising the minimum wage will cause employers cut certain jobs, an idea that is highly disputed by the left.  The Washington Post  recently argued that wage increases could be absorbed if parent companies lowered the fees they collect from franchisees. 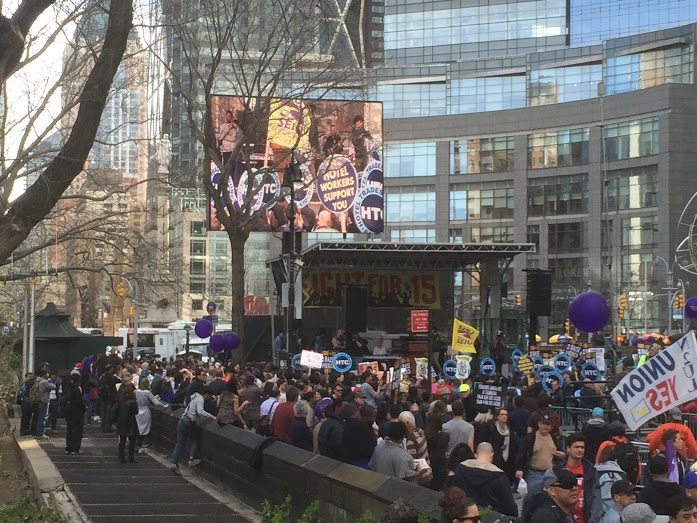 Though they have not announced their candidacy but are expected to run, both Jeb Bush and Bernie Sanders take a particularly radical approach to the minimum wage issue. Bush opposes  there being a federally mandated minimum wage at all, stating, “We need to leave it to the private sector,” and “I think state minimum wages are fine. The federal government shouldn't be doing this.” Meanwhile, Bernie Sanders, a democratic socialist, is co-sponsoring a bill to increase the minimum wage to $10.10.

Other politicians, including New York City Mayor Bill de Blasio and Massachusetts Senator Elizabeth Warren, an ideological leader of the progressive wing of the Democratic Party, have come out in support of the Fight for 15. On Twitter, de Blasio said “Our City will continue to #FightFor15  because the minimum wage must keep up with the cost of living.”

Given the special attention politicians are paying to wage stagnation and the shrinking middle class, it is easy to predict that these will be important issues to voters in the upcoming election. Moreover, protesters across the globe are coordinating actions to bring low wages into the national spotlight.

The Case of the Etruscan Chariot, Purchased Or Stolen?