On the afternoon before Yom Kippur, the Day of Atonement in the Jewish world and the holiest day of the Jewish calendar, another, more controversial custom is celebrated; Kapparot. “Kapparot,” or “Kaporos” comes from the Hebrew word for atonement. It is often celebrated between Rosh Hashanah, the Jewish New Year, and Yom Kippur. I attended the 2015 ritual on September 21, the night before Yom Kippur.

In this practice, Jews make an offering to God in the form of an item. The item is swung three times over the practitioner’s head. Though a mere bag of coins is allowed to be sacrificed for Kaporos, the other variant, a living chicken, has caused considerable controversy stemming from their use by the Hasidic Jewish community of Crown Heights, Brooklyn. 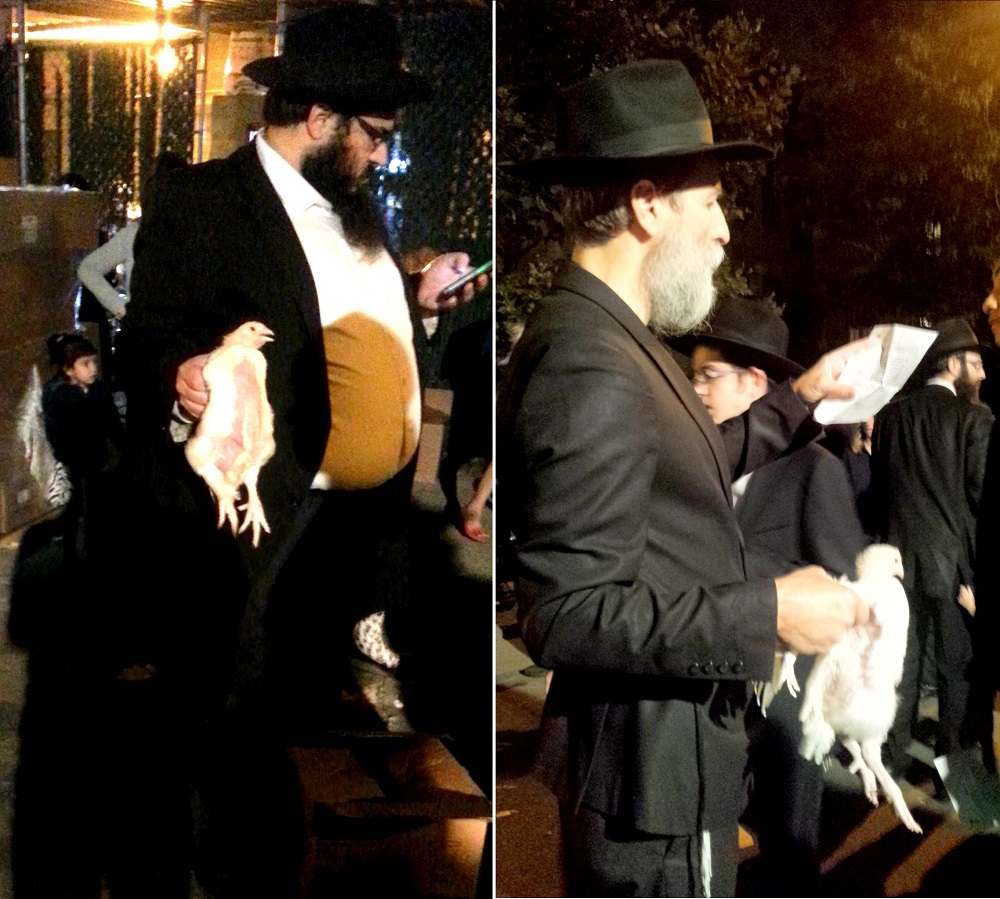 “We take the chicken, and we say, ‘God, I know I’ve done some things that maybe, if you were really being strict with me, you would maybe want to punish me, God forbid, by taking away my life.’” Rabbi Eliyahu Soiefer says in a YouTube video by the channel Long Island Vegans.

Soiefer goes on to paraphrase the principles behind the ritual: “’I’m asking you; don’t take me. Let me live, be kind, be merciful; take the chicken. I’m going to give you the chicken. And I three times sway it gently over my head. This is my repentance. This is my substitution. This is my exchange. May the chicken be slaughtered in a kosher way, and may I go on to a good life of peace, and health and happiness for the upcoming Jewish New Year,’” says the Rabbi, who later criticizes the disorder of the ritual and treatment of the chickens.

In July, an animal rights group called the Alliance to End Chickens as Kaporos, along with 19 other plaintiffs, sued various city agencies and several practitioners who engage in and organize the event, including four rabbis and several Hasidic congregations.

The suit alleged that the “barbaric” tradition “constitutes a substantial public health risk that could have catastrophic and epidemic consequences,” and that the Police and Health Departments “aid and abet” the ritual by not  enforcing state and city laws for public health and against animal cruelty.

On September 14, Rosh Hashanah, New York State Supreme Court Judge Debra James ruled that the enforcement of animal cruelty laws is discretionary and that the NYPD committed no wrong-doing by allowing the ritual.

Nora Constance Marino, Chief Litigation attorney in the case, spoke with me nearby a Kaporos ritual on September 21, while an animal rights protest by the Alliance to End Chickens as Kaporos was held across the street. 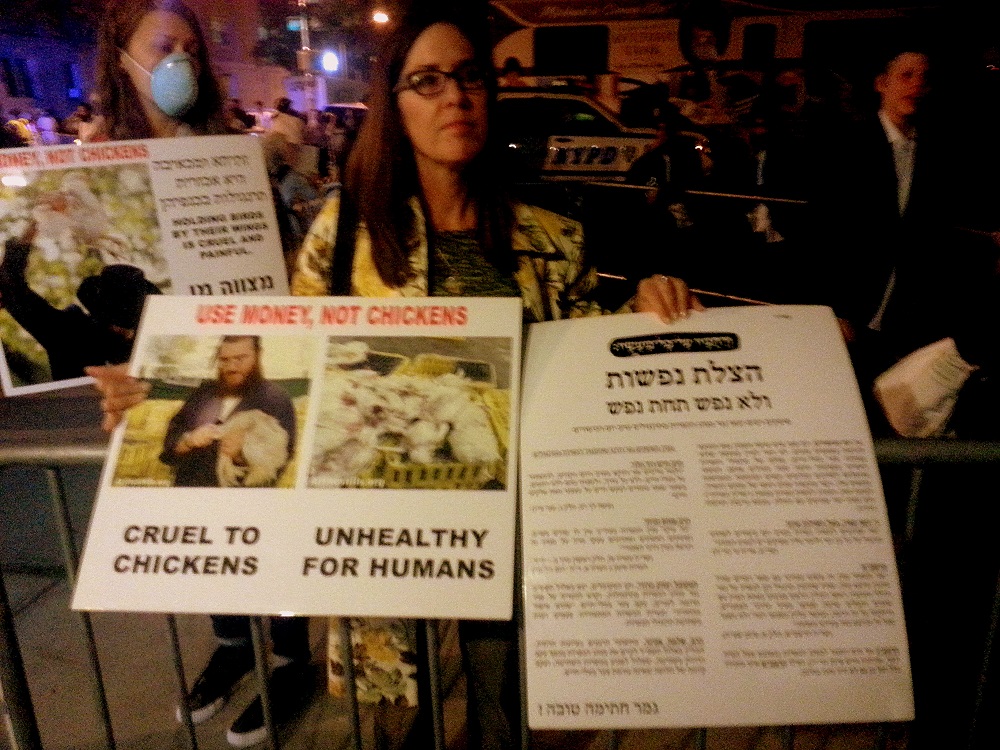 "We had asked for a preliminary injunction to stop this year's event. That request was denied. Our underlying case for a permanent injunction is still alive. We also asked for a judicial mandamus (an order from a superior court) to have the court compel the NYPD to enforce these 15 laws that are being violated. That was also denied," Marino told me. "But, an appeal is always possible." 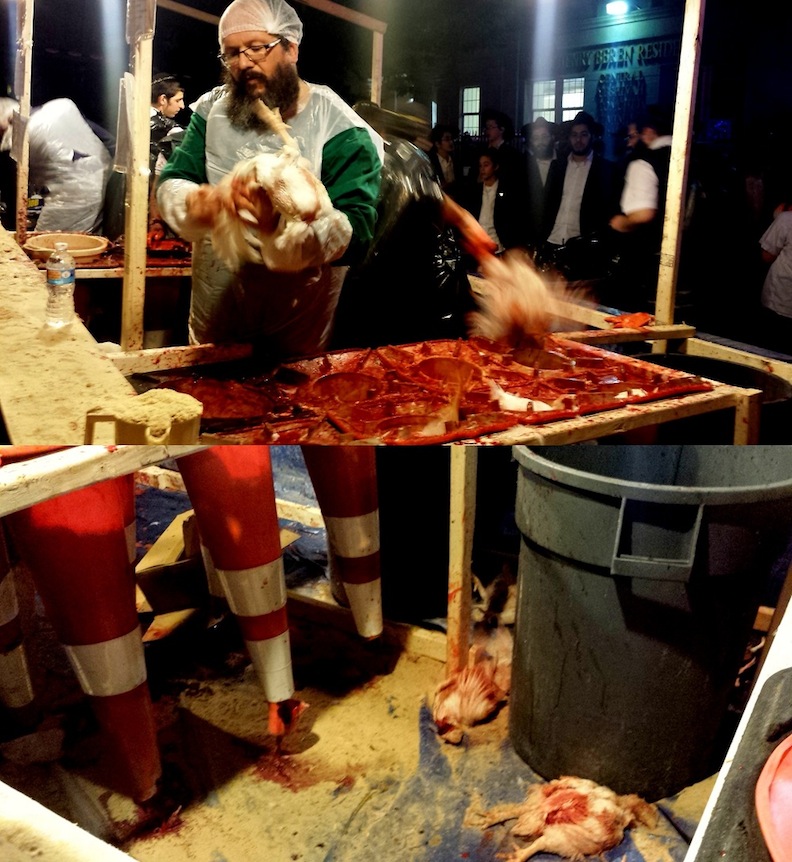 The laws Kaporos allegedly violates range from penal code § 133, which says “It is illegal to employ a child under the age of 18 in a slaughterhouse in any position,” to § 161.03 which states “Blood and feces from animals and animal parts are prohibited on a public sidewalk and ‘pervasive odors’ from animals are prohibited.” Other laws specifically prohibit the erection of a slaughterhouse on Eastern Parkway, a main Hasidic hub or prohibit animal cruelty.

When I exited the Kingston Avenue stop off the 3 train, I immediately saw hundreds of Hasidic Jews outside of the Congregation Lubavitch. Within a few minutes, I was approached by a man named Yosef, in his 30s he told me. 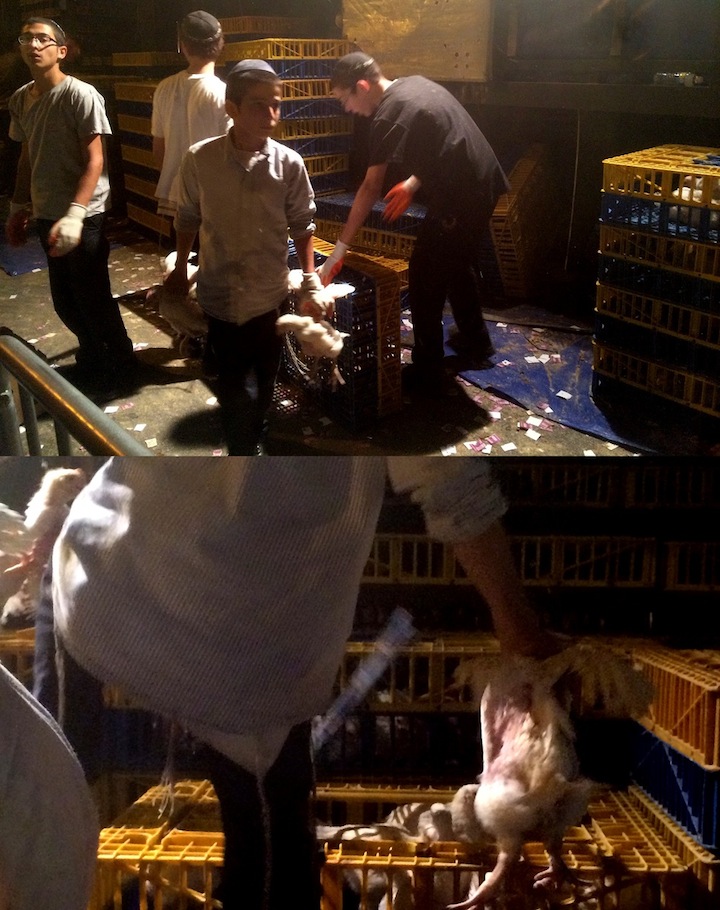 He asked whether I was Jewish. I told him “yes,” and he asked whether my mother was. “Yes,” I told him as he ushered me into the congregation, hurried as sundown was rapidly approaching. “You come at the busiest time in the entire year,” Yosef told me.

Inside, he offered me a Kippah before I entered the main hall. I obliged and we went to a corner where he dressed me with a Tefillin and had me repeat a prayer. “This (the Tefillin) is a device for communicating with God,” an elderly man said, pointing to the one of the black leather boxes. “That one has got the best signal,” he joked.

In the interest of full disclosure, I am not a practicing Jew or a believer in God, nor do I eat chickens, but the man’s joke was heartwarming and brought me back to a culture I once knew, steeped primarily in two things: traditions that I never quite understood and excellent humor.

Just a few blocks away the Kaporos was already underway. The ritual took place on a street, guarded by police barricades. While the sounds of the chickens squealing were unpleasant, and the scent of them more so, children’s faces could also be seen beaming with excitement (Watch the Video). Some were waving the chickens over their own head and others aided the children and prayed for them. 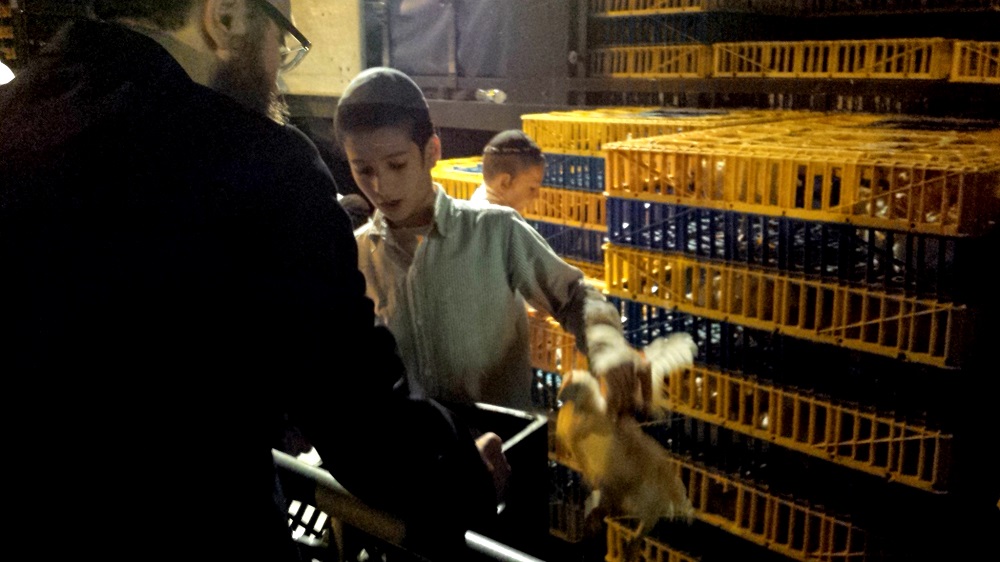 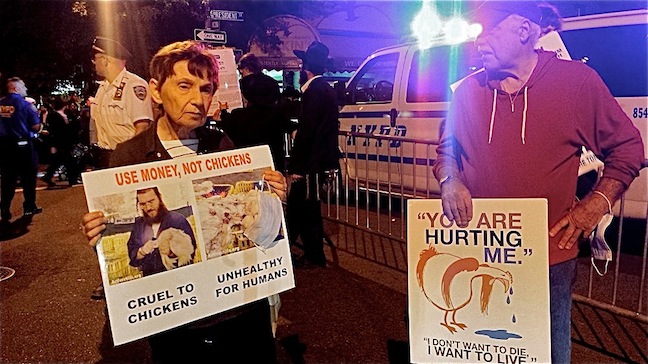 In the back, chickens were sold cheaply; as little as $12 Yosef told me, though many reports say $5. In the middle, a semi-trailer truck carried hundreds, if not thousands, of chickens in cramped boxes, and underneath a child could be seen dealing them out to practitioners. In the front, the necks were sliced and the chickens were thrown into upside-down traffic cones and trash bags while Jewish men and women waited in segregated lines".

"From my understanding it's rabbis and synagogues that order in 50,000 chickens from poultry dealers," Marino told me.

While I walked about I was pushed several times by teenagers. They jumped in front of my phone to thwart my photographs. An elderly man did the same at one point, but when one boy told me that I did “not belong here,” another man, middle-aged, scolded him, saying that it was a public street and a free country.

Later, the Alliance to End Chickens as Kaporos began to march alongside the ritual; the protest was beginning to heat up. Several exchanges between the Ultra-Orthodox and animal rights protesters turned aggressive. "The blood is on your hands,” was chanted by the Alliance, and “Stop Kaporos / It’s chicken slaughter / depriving chicks / of food and water.” Others simply yelled “Shame on you!”

At one point, a Jewish man began yelling about how he loves to eat chickens and encouraged others to join his chant when an NYPD cop came over and berated him. “You should know better, at your age. You’re not going to start a riot here,” the officer said. 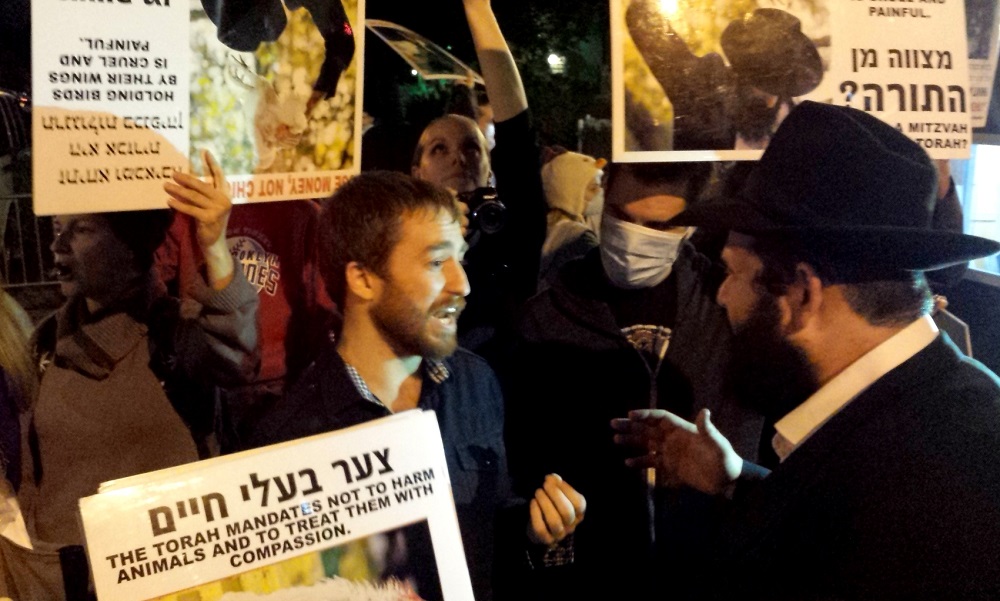 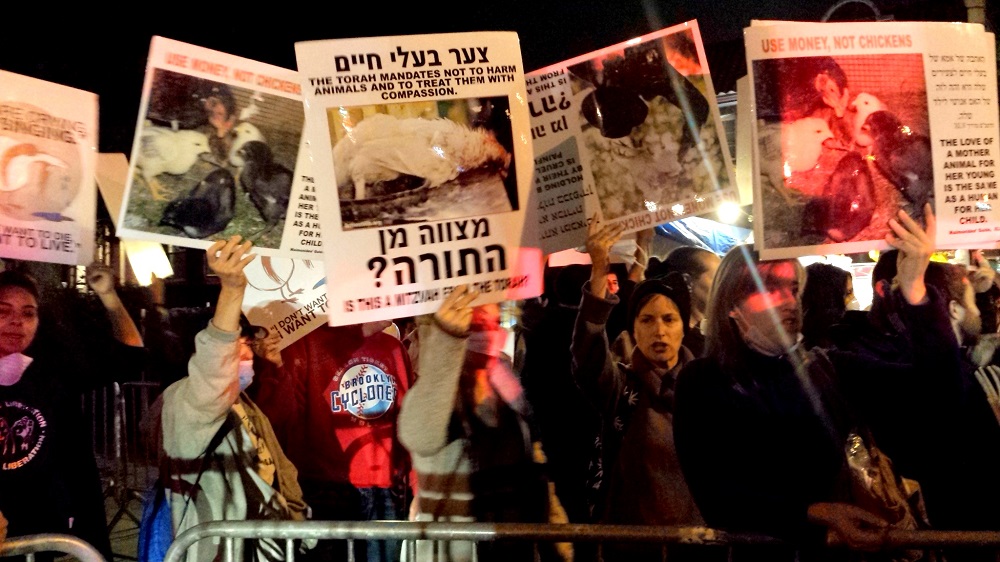 Other encounters were friendlier. One member of the Alliance, Jeanette Patterson, spoke with a young Hasidic man, saying “These chickens have suffered. You shouldn’t be causing suffering. So why choose something that you know causes suffering?” she asked him. “These chickens were starving. They’re thirsty. Many of them are dead before they even get here. Your God does not want you causing suffering to others,” she told him. “You don’t have to cause suffering, you could use coins.”

Later, Patterson told me that she is a member of the group People for the Ethical Treatment of Animals (PETA) and that others in the Alliance are as well. “All of us belong to other groups,” she said.

Later, Eric, a Jewish man, disputed someone’s assertion that the practice constitutes animal cruelty. Though Eric is not orthodox, he has several friends within the community, he said.

“You know what, I think first of all if you eat chicken, that involves animal cruelty and that’s happening every day. This is something that’s just in a small community one time a year.” He said, adding that he found it unfair that animal rights protesters were targeting a small religious minority instead of protesting outside of factory farms.

After the protest dwindled I spoke with another Hasidic man named David. “This is a whole custom; 2,000 years old. The whole Jewish world does it,” he said. David has been celebrating Kaporos since a child. “When we see a chicken being killed, you know he deserves it for the sins we gave him. It is a way to repent,” David said.

He said that Rabbis typically buy the chickens cheaply and sell them for a small profit. “The money of the chicken goes to the poor people,” David said, citing Jewish law. “The actual chicken doesn’t go to charity, because it’s embarrassing, so the profits go to charity.”

Chief Litigation attorney Marino has previously stated that Kaporos was becoming a major fundraising event for the congregations of Crown Heights and Boro Park, reported the New York Daily News.

Chabad-Lubavitch, the world’s best known Hasidic movement, operates its world headquarters where I was given the Tefillin.

Rabbi Yosef Yitzchak Schneersohn, once the Rebbe, the dynastic head of Chabad, was exiled from Russia after the Bolsheviks attempted to have him executed. He later moved to Warsaw, Poland, until the start of the second World War. After fleeing the Nazis, Schneersohn established much of Chabad’s organizational structure in Crown Heights, where it continues to function today.