Cavaliere d’Italia Sally Fischer: This Is How I Fell in Love with Italy

Sally Fischer, President and Founder of Sally Fischer Public Relations (SFPR) has been awarded with one of Italy’s highest honors, the title of Knight of the Order of the Star of Italy (Cavaliere dell’Ordine della Stella d’Italia). Fischer received the prestigious medal at a special ceremony held at the Italian Consulate General of Italy in New York City, on June 5.

The order was bestowed in December 2017 by a decree from Italy’s president, Sergio Mattarella, in recognition of Fischer’s contribution to the promotion of Italian businesses and initiatives in the United States. In particular, she has been highly active in assisting the Italian Consulate with the development of close collaborations with American institutions.

This distinction represents a particular honor on behalf of all those, Italians abroad or foreigners, who have acquired special merit in the promotion of friendly relations and cooperation between Italy and other countries and the promotion of ties with Italy. In particular, the nominees are considered to have supported the preservation and promotion of national prestige abroad, which translates in various activities, such as the promotion of the Italian language, volunteering and charitable, philanthropic activities, the scientific and technological research, or commercial enterprises.

Sally Fischer is the Founder/President of Sally Fischer Public Relations. Today SFPR is retained by more than 20 clients, many Italian, and over the years has worked in areas as diverse as fashion & film, entertainment, food and wine, fundraising, travel & hospitality, publishing, art, design & culture, and special events.  Sally Fischer, a New Yorker,  resides in Manhattan with her husband Elliott and son Jack who both studied Italian and enjoy traveling to Italy as much as Fischer does.

Below her speech pronounced after the Consul General Francesco Genuardi gave Sally the prestigious award.

1969 was a very good year—so said Frank Sinatra at the time—it was the summer the Americans landed on the moon but it was also the year I made my first journey to Italy.

I was a young girl—and my mother thought it would be the right time to add some sophistication to my portfolio—so she swept me and a girlfriend up and took us on a six- week tour of Italy that would include: Rome, Assisi, Florence, Venice, Verona, Milano and Lake Como.

Just to tell you my state of mind at the time: I was on page 200 of the novel Gone With The Wind or Via col Vento (Italian title) as I would come to call it later –and I cared very little about life beyond NYC. I was the perfect poster girl for that now infamous New Yorker cartoon. My girlfriend and I arrived in Rome and slept late the first three days in Rome—we were in a suite at the (then CIGA hotel) Excelsior—on the VIA VENETO—and then one day something happened: Magically, June and I woke up and wandered towards the Spanish Steps—where all the young people hung out—and we discovered life. For the next six weeks –we woke up early and left with my mother and her friend to explore the beautiful cities, sites, food and shopping that Italy had to offer. La Bella Italia. 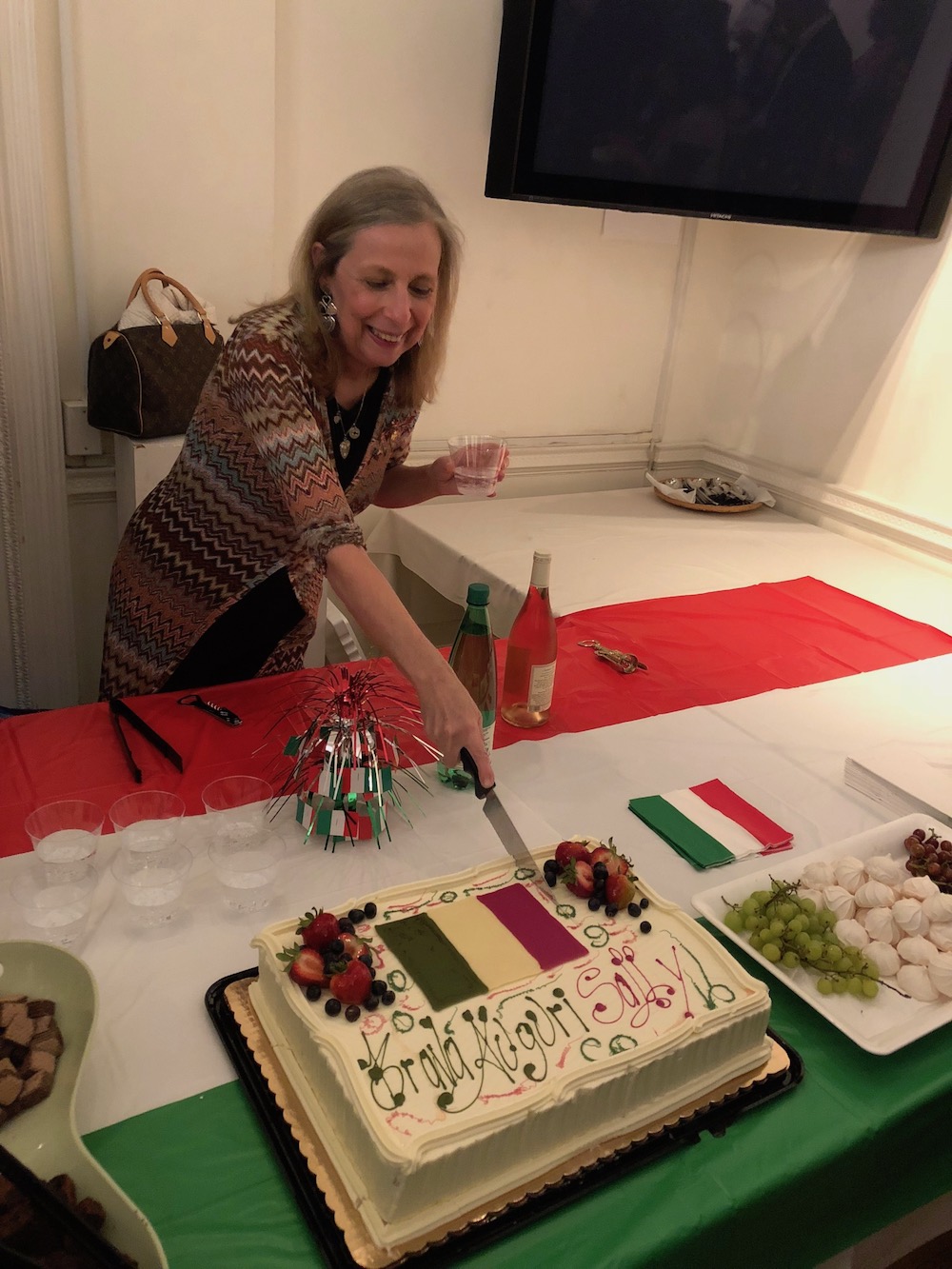 We missed Woodstock that summer—but I found a whole new window that years later would open up even wider for me.

Fast-forward some years to my High School years when, 16 girls and I took off for Florence to study the art and history of Florence in the cities many museums.

Don’t laugh but there was a strike –yes, uno sciopero..and all the museums were closed for the entire time we were there—so we girls—set out onto the streets of Firenze and had an amazing time.

I fell in love with the city and a young man—and came back to Florence that summer and then created an exchange program in my senior year of High School—which was life- changing. I learned Italian, decided to stay on in Florence and begin my University studies—and for the next 8 years, I remained in Florence.

You could say my formative years were there!

I came back to NYC in the early 80’s and began trying to piece together a life that was somehow divided between Italy and NYC.

Today I am married to a New Yorker who has been kind enough to also study and learn how to speak Italian—Elliott Upton and of course our son, Jack Upton—who this year studied abroad in Florence—continuing the tradizione.

Jack now speaks Italian just as I did when I first went over to Italy and he too cares deeply about the country and the city of Florence. He worked for the Italian Soccer team –la Fiorentina while there and made some good friends.

I am proud of him and he is the future and my legacy!

I have spent most of my life caring about Italy and working to establish relations between Americans and Italians and Italian Americans. I am a Jewish New Yorker BUT I also am proud of my Italianita’

I have worked with the best of the best: Brands like: Brunello Cucinelli, Belvest, Acqua di Parma, Institutions like Pitti Uomo, Serie A soccer, cities and regions: Tuscany, Liguria,

Lazio, Veneto.. Sting and Trudie Sytler’s wine and Estate Il Palagio –Susanna Agnelli, Priscilla Rattazzi, Jean Pagliuso The Hotel Bauer in Venice—Luce-Cinecittà in Rome, and of course the Winter games in Torino Italy in 2006 when my family and I moved to Torino and opened up a press office serving all of the American Press –including the Today Show, NBC evening news and The New York Times.

Recently with Open Roads and tributes to Italian directors such as Visconti, Antonion and Pasolini with Cinecitta’ we have brought Italian cinema to many American across the United States.

Grazie a voi di essere venuti. Grazie al The President of the Republic of Italy, the Hon. Sergio Mattarella who has awarded me a distinguished Italian decoration: Cavaliere dell’Ordine della Stella d’Italia-.and of course to the kindness and thoughtfulness of The Consul General of Italy, Hon. Francesco Genuardi and his amazing staff, Chiara Saulle, Isabella Periotto, Silvia Limoncini who have cared enough to think of me for this honor.

I also thank my mother and father—for allowing me to explore the world at such a young age and to my brother Hal for also being a part of this part of my life. To Jack and Elliott and of course my amazing staff led by Cynthia Brody who is also an official lover of all things Italiani. 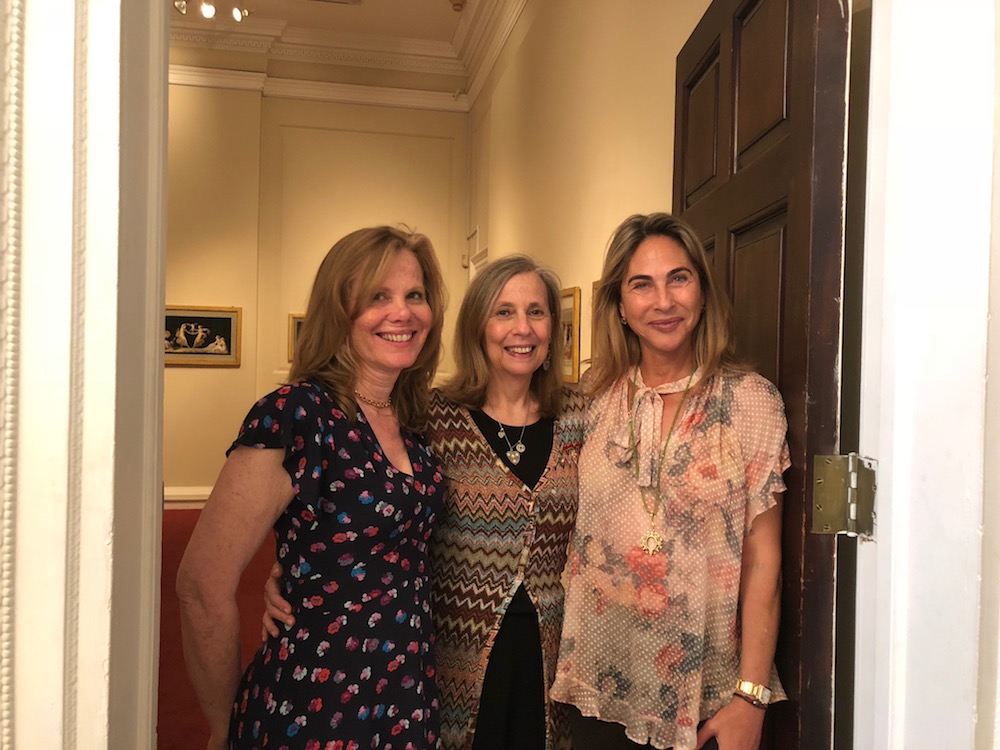 Sara Gay Forden, Author of House of Gucci, on Her Book and the Movie

Cavaliere d’Italia Sally Fischer: This Is How I Fell in Love with Italy