We spent the entire fall at our house in Penna San Giovanni.Though it was a poor year for olives and grapes, all of the fall festivals were in full swing

We spent the entire fall at our house in Penna San Giovanni this year. Though it was a poor year for both olives and grapes and we only participated in one vendemmia (grape harvest), all of the fall festivals were in full swing.

In mid-October we sampled Eurochocolate in Perugia, an annual festival celebrating chocolate as one of nature’s perfect foods.  We loved Perugia (see blog post here for a description of the town and the sites we visited), but the ChocoFest was a bit disappointing.  We did not take advantage of the trip to the Perugina chocolate factory a half hour out of town, which was probably pretty interesting.  In general, the main streets of the town were filled with many bancarelle, or booths selling about ten different brands of chocolate.  After sampling a few, we’d had our fill.  But Eurochocolate gave the town a festive air, plenty of people were out strolling, the weather was beautiful and there was music in the streets.  No complaints from us! 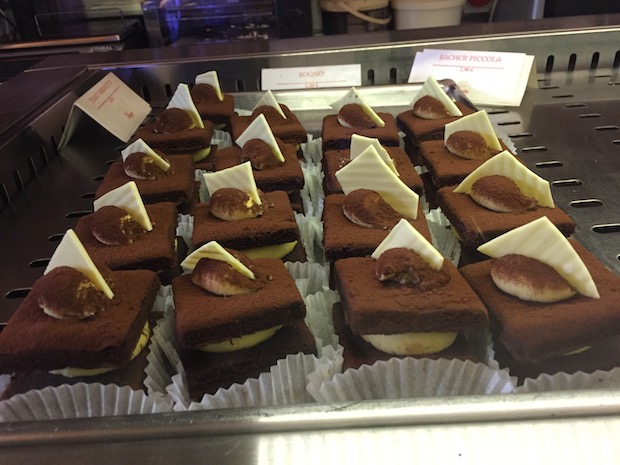 The town of Sant’ Angelo in Pontano, neighboring Penna San Giovanni, has an annual Festa degli Uccelli.  It took place this year on a beautiful Sunday when most of the tourists had gone.  Filled with families, there were vendors of all kinds– clothing, toys, hardware, linens, vegetables, and the big bonanza in my opinion– a stand selling fresh porcini mushrooms.  This was a first for me, since I’d only ever seen them dried.  I’ve never cared for the dried porcini– I think they get a little slimy when they’re soaked and rehydrated.  The fresh ones were astounding over fettucine.  And the bird vendors were amazing!  I don’t know if the birds were for sale or solely for display, but there were extraordinary chickens, colorful exotic birds, squawking parrots, and delicate jewel-toned finches.  A wonderful afternoon where we ran into friends and gorged on street food.

In 2016, the biggest and most terrifying of that year’s earthquakes took place on October 30, the day of Penna’s annual Castagnata, or chestnut festival.  With damage to many homes in the centro and the church’s campanile on the main square of the town, the festival had to be cancelled.  (One of the young organizers of the event was frantically trying to figure out what to do with 600 kilos of fresh chestnuts.)  But this past fall, the campanile was braced, the piazza was adorned with persimmons and wheat sheaves and the Castagnata was open for business.  It’s the biggest event of the year in our town.  On the main piazza there was a roaring fire just outside the commune where two men were roasting chestnuts on a giant griddle.  The women of the town were selling homemade chestnut pastries, along with grilled sausage sandwiches and homemade wine.  Despite the damp and cold, there were craft stands, stands selling local gastronomia such as vino cotto (cooked wine), oil, farro, a nutty grain that’s very tasty with curry and vegetables, handmade soaps, jams and honey.  A good time to chat with friends and rejoice in fall’s generosity. 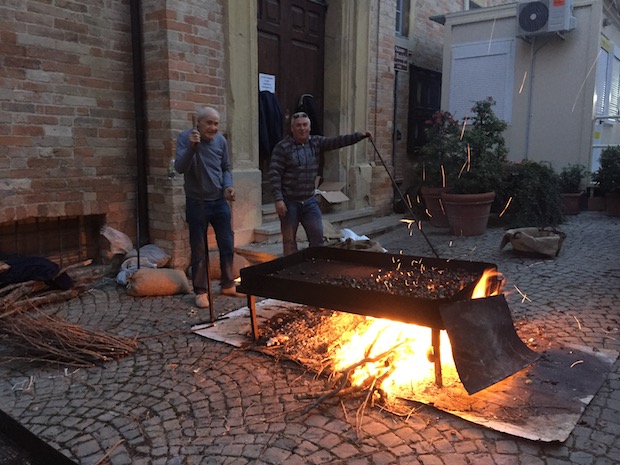 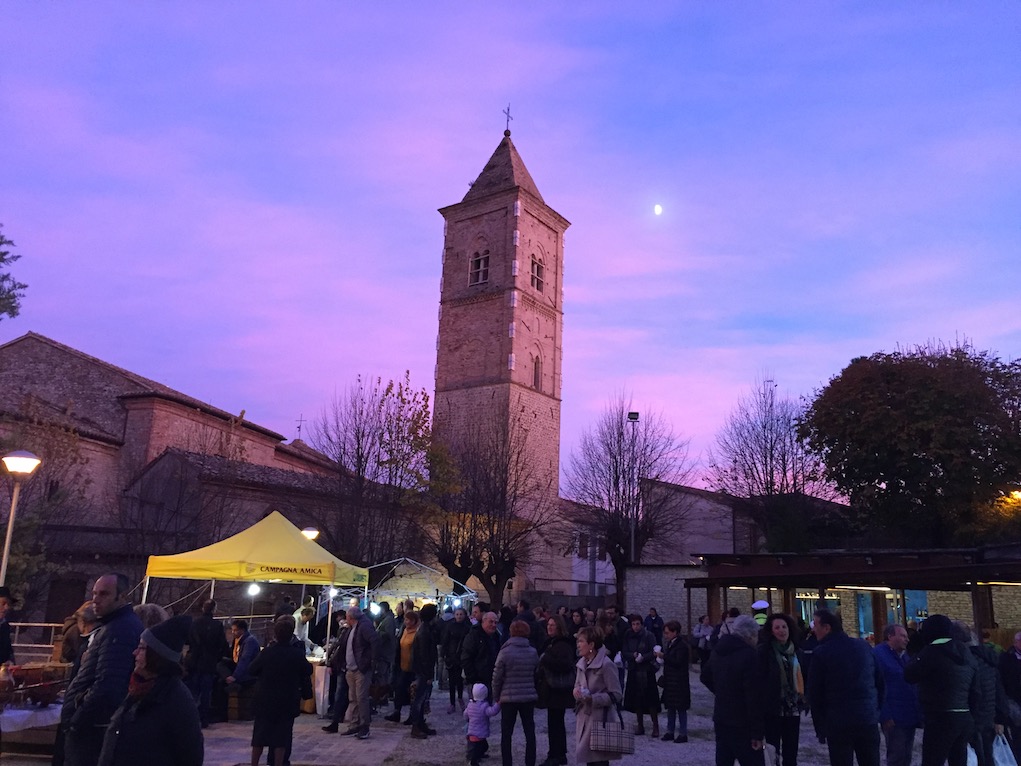 Our neighboring town, Monte San Martino, has an annual Sagra di Mela Rossa — or Pink Apple Fest.  We heard about it through some friends who had recommended we visit the restaurant at Agriturismo Giulietto Mecozzi to try the extraordinary fettucinI mela rosa— pasta with pink apples.  We stopped by the agriturismo to make a dinner reservation one afternoon as they were setting up for lunch and there met the chef– a short, burly man with very dark thick hair nearly covering his dark, serious eyes and a dark thick beard.  His partner was taller, thin, with light curly hair, light eyes and a winsome smile.  They were polar opposites in manner and appearance, but what was evident just by looking at them, was that these guys could really cook.

The dining room was not fancy– it felt like a medieval taverna with thick wooden tables, stone walls, and an enormous languid sheep dog lying on the flagstones outside guarding the entrance.  But the food was phenomenal and more than any human could possibly eat.  In addition to lodgings, the restaurant and a complement of farm animals, these owners run a macelleria, or butcher shop.  So, the antipasto featured housemade salumerie, pecorino, fagoli, and uova strapazzate con i fegatini— a dish that looks really good, but I will not touch–eggs scrambled with chicken livers.  My husband Jesse reported that it was excellent.  Then came an enormous platter of that famous fettucini with mela rosa.  It was so delicious– the sauce had the texture of pesto, but with the blended sweet and savory flavors of the tart apple, onion and lots of the olio nuovo that had just been pressed.  It was incredible, but they would NOT give me the recipe.  There were some very well dressed people at the table next to us, clearly out-of-towners.  They must have been to this restaurant before, because, wary of the immense quantities served, they’d ordered only steak and salad.  But when they got a whiff of the pasta on our table, their eyes lit up as they furtively glanced at us.  We passed the platter over to them and they all took a few bites.  Even after sharing, there was still enough for us to take home.

A few days later, we visited Monte San Martino for the actual Sagra di Mela Rosa.  It’s a pretty town at the peak of a steep road with little room for parking in the two piazze.  Shuttle buses ferried visitors up to the top where the festivities were taking place.  There were lots of stands with locally made soaps and lotions, cheeses, salumerie, chocolate and locally grown apples.  At the main tent, there was ravioli stuffed with pink apples, veal involtini sauced with pink apples, and some pastries also using this hybridized fruit.  There was a display of apples of the region and lectures on the health and gastronomic wonders of pink apples.  They’re quite good– tart and sweet at the same time– a bright tasting, firm, smallish apple.  I did try to re-create the pasta al mela rosa at home, but I won’t share my recipe yet– not until I’ve tried it a few more times and gotten it right.

Unfortunately, just as we got to the top of the town on the shuttle bus, it started to drizzle.  Nothing makes Italians scurry for cover faster than even the threat of rain– the health risks of being outside on a damp, chilly day– well, as anyone knows, they are huge.  So not wanting to flirt with illness (or show ourselves so obviously foreigners by hanging around in the rain), we didn’t stay too long.  Here is a link to Cucina Italiana’s coverage of the event:  https://www.lacucinaitaliana.it/news/eventi/alla-scoperta-della-mela-rosa-di-monte-san-martino/.

Fall is hunting season, and it seems the hunters in our town can’t wait to get started.  The town and its surrounding countryside are divided into zones and there are squads of men assigned to each zone.  They’ve got dogs, radios, thermoses full of hot coffee, camouflage outfits, bright orange vests, and of course, guns.  They hang red, laminated signs with cute green ribbons on the utility poles on all the town roads announcing their squad number so residents aren’t alarmed by grown men in costume fanning out across the hillsides with big guns in search of cinghiale, or wild boar.  The dogs, with tinkling bells on their collars, are meant to rout the pigs out of the woods so the hunters can see them and shoot them.  I’ve heard there have been years where over 100 wild boar were shot and captured.  The cacciatori come on our land often because we are close to the woods, and once, in thanks for our hospitality, one of the hunters we happen to know from the bar, brought us a few frozen cinghiale steaks.  This was exciting, and I made a very delicious cinghiale ragu. 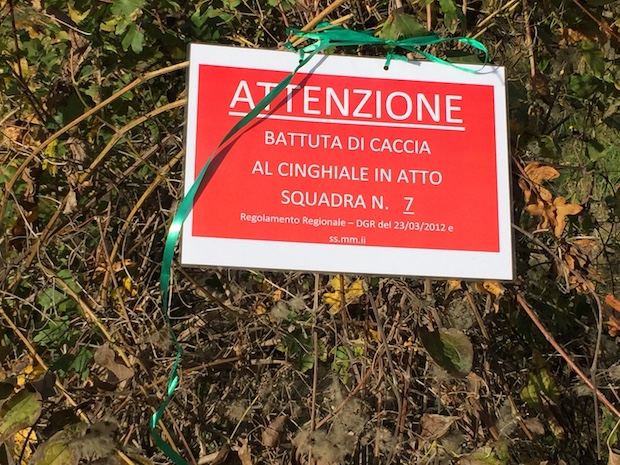 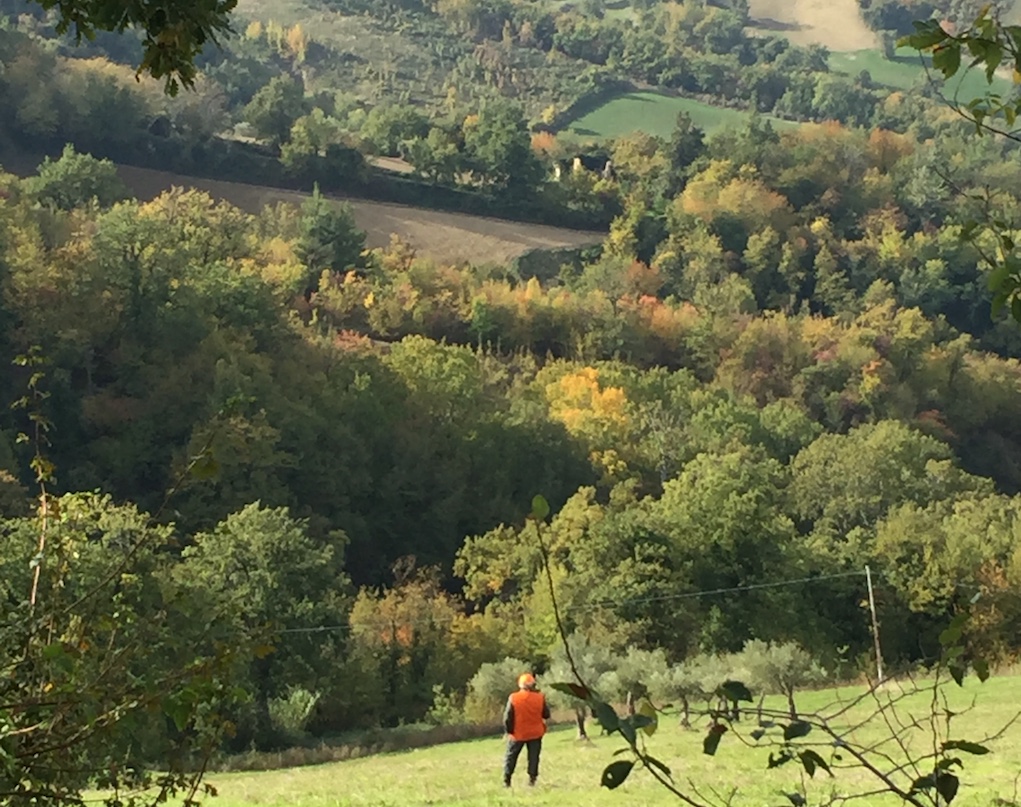 But that was a few years ago, and though we’ve seen the empty shells from their ammo on our lawn each season, no one has come by with meat.  This year, we heard a lot of barking, the jingling dog bells, and a lot of crackling on the radios, but few if any shots.  Mostly, we saw several orange vests in the distance across the valley, and saw a bunch of guys sitting in their cars munching sandwiches waiting for… what?  We don’t know.  Lunch maybe?  Because the wild boar must also adhere to the “1:00 pm is Lunchtime” rule– all the hunters take a mandatory two-hour break at that sacred hour.  So far, we haven’t heard that there’s been any sort of remarkable catch.  I don’t mean to take it lightly, the hunt… well, yeah, I guess I do.  There is something comical about a lot of big, clumsy-looking guys burdened down with way too much gear trying to trick a giant pig, which wants nothing more than to snooze in the forest, protect its babies and rampage through your garden once the sun goes down.  But, boys will be boys and these ragazzi are pretty serious about their mission– and we’re happy to have them around since they are respectful of our property and keep an eye on things when we’re away.

Our town of Penna San Giovanni held its first Mercatino di Natale this year.  For the kickoff, the Mayor gave a short speech and threw the switch illuminating town, which was lit up like, well, a Christmas tree.  The lights were quite festive and much more elaborate than years past.  Empty stores along the town’s main passage were filled with vendors selling handmade dolls, lavender sachets, holiday ornaments, local cheese, salami and honey, and my favorite– the Pesca, which I once thought meant “peach,” but now know means “fishing.”  Here’s how it works:  you buy one chance for 1.5 euros, or 4 chances for 5 euros.  You reach your hand into a bowl in which there are hundreds of numbers, each on a tiny piece of paper, rolled up and stuffed into a piece of dry tubular pasta, like penne.  You open your number and the kindly ladies running the Pesca see what prizes (donated by local vendors) you’ve won, corresponding to the numbers you picked.  This year, I won a bra (got to choose my size since there were at least a dozen donated), a silver flower vase, some nice liquid soap and a little dish for serving olives or snacks.  What a haul!  The proceeds benefit the children’s church choir, which is a lovely thing and totally worth it.

We spent the two days of the Mercatino in the furniture store, whose nice owners loaned us their space, selling t-shirts to promote and benefit restoration of one of the town’s four arches.  And that is another story I will relate in a future post.  In the meantime, buone feste!