Idea Festival Is Inspired by Italian Culture: But How Do Italian Americans Fit In?

This past weekend, I Am Books, an independent Italian American bookstore in the North End of Boston, hosted its first Idea festival

Lo staff di I Am Books.

This past weekend, I Am Books, an independent Italian American bookstore in the North End of Boston, the city’s historic Italian immigrant neighborhood, hosted its first Idea festival, “an Italian-inspired festival of books, authors, and culture”, according to its website. I Am Books is the first bookstore Italian American bookstore in the US, opened just three years ago but already an epicenter of cultural life in the neighborhood. 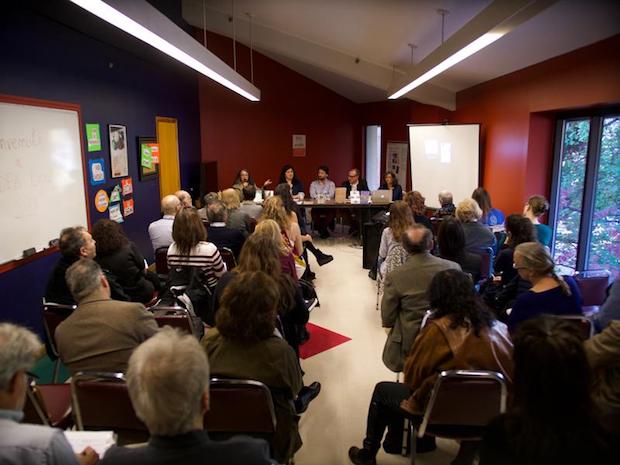 The largest wave of Italian immigration to the US occurred at the start of the 20th century, as mostly impoverished southern Italians fled from dismal economic conditions and ended up joining, in large part, the American working class. For a couple of decades these Italians, many of whom spoke only dialect, were treated with discrimination. Soon, however, this discriminatory treatment became reserved solely for immigrants of color. In fact, for over half-a-century now, Italian immigration to the US has significantly decreased and the stories and traditions brought by these new immigrants – now mostly from wealthier parts of the peninsula – share very little with the inherited tales of today’s Italian Americans.

Who exactly are today’s “Italian Americans”? As has become commonplace in today’s world of identity politics, this “label” seems open to almost anyone who wants to claim it – one of the poets on the panel at Idea, for example,  had an Irish-American mother. And many of the members of this “community” are second or third generation, speak no Italian (maybe a few words of dialect), have never been to Italy except for ten-day vacations, and culturally seem to be as “American” as anyone else. They have developed idiosyncratic traditions or expectations of which many “real” Italians remain ignorant, such as eating seven fishes on Christmas dinner and having two kitchens in their homes. They are also incredibly proud of these traditions, wearing them like badges that prove their sense of belonging: “befana witches,” “scenes of the passion,” and a “rabbit foot dyed pink” are some details from a poem by Italian American poet Jen Martelli. I do not mean to belittle their traditions or challenge their authenticity: on the other hand, Italian American identity seems to maintain a fierce “authenticity” despite this lack of clear cultural parameters.

Perhaps this is what being culturally “American” means: the desire to come from somewhere, to belong to some “ethnicity” or group whose origins lie in a more exotic, or at least distant, place. Family is one of the most frequent themes that emerges from Italian American writers, as poets detail stories of their parents, or often grandparents (Poet Julia Lisella’s “Nonna is [her] Cinderella,” working away in a Calabrian factory), who are closest to the source, Italy, which remains powerful enough to provide a sense of identity to generations of descendants. Interestingly, many of the Italian American initiatives I’ve mentioned are fairly new: I Am Books was founded in 2015, Ovunque Siamo in 2017, and there are plans for a future PhD in the field, according to Nicholas Grosso of the John D. Calandra Italian American Institute.

The large audiences of the two aforementioned panels – both of which were packed – point to the wish among the Italian American community to perpetuate itself and cement its identity through writing. Benedict Anderson’s well-known concept of “imagined communities”, socially constructed communities which continue to exist due to the imagined connections between their members, depends on the existence of “print capitalism,” which maximizes circulation and creates common discourses. Italian Americans are, perhaps, a rather innocuous imagined community that will never reach nationalist fervor or intensity precisely because it must straddle two ideas of the nation. But as in Anderson’s more nationalist examples, through print media, this vague cultural identity can strengthen and come to terms with its own existence and assure its continuation.

Idea Festival ultimately captured the multiplicity inherent to Italian identity in the US – the speakers and themes ranged from the very “Italian” to the squarely Italian American and went on to include Jewish and current migrant identities, among others. As heritage, nation, and culture are being given increasing importance, there is a simultaneous push to eliminate differences and proclaim a common human race; this contrast inevitably produces confusing results when it comes to cultural identity.

But perhaps modern Italian Americans do not need a stable and well-defined shared cultural heritage to enjoy their community, and are rather content with their shared stories of catholic traditions, dialect-speaking grandmothers and the difficulties of immigration. Longo proclaimed that if she “did not have [her] Italian American heritage, there would be no point to [her] life”. It will be interesting to observe how this heritage continues to renew itself as the shared stories inevitably warp and older relatives’ memories fade away– but whatever happens, Italian Americans today are certainly willing to keep spinning the fabric and providing the tales that unite them.

Italian Exhibition at the UN Centers Art by Artists with Disabilities