As the Columbus Day Debate Rages On, So do the Time-Worn Stereotypes

In response to Lauren LoGiudice article "Are Italian Americans the White's Clowns?": there cannot be an identity crisis when there is no single identity

The contributions of those who claim Italian heritage to American society are significant, yet the prevailing newsworthy story regarding the Italian American community in recent months is the Christopher Columbus narrative. A central theme highlighted is the nasty bickering the topic has engendered within the Italian American community. Was he a villain? Should he be judged by contemporary standards of justice? Should the federal holiday be re-named? And, what about those pesky statues that blight our cities? For many Italian Americans, whether or not you support keeping the Columbus Day holiday, including the accompanying statues and parades, has become a litmus test for Italian American pride. Support for Columbus has become an expression of ethnic nationalism. Which side you take in the debate has become the sole defining moment determining inclusion or exclusion – where you stand determines whether you will be considered part of the group or a traitor to it. This runs parallel to the way a person’s view as pro-life versus pro-choice has become an election guide in the feminist movement. It is the determining issue and the rest of the candidate’s platform becomes irrelevant.

In her piece about Columbus and Italian American identity (La Voce di New York, March 27, 2018), Lauren LoGiudice ends by saying that, “. . . finding a new way to pride is the only hope we have left.” While I agree with this conclusion, the arguments leading to it should be challenged as they take us down the well-traveled path of ethnic stereotyping. Italian Americans are anything but a cohesive ethnic group with a clearly stated point of view that represents all. There cannot be an identity crisis when there is no single identity. The within group differences are numerous and whether these can be overcome to bring those with contradictory beliefs together is a reflection for anther day. Despite this, there is a tendency from among those within the group to speak in the same generalizations used by those outside the group as if there is some shared unwritten code, as if there is a stronghold of ethnic unity. The diversity of dialects, religious practices, racial identification, sexual orientation, food ways and traditions is not the story widely shared among Italian Americans or communicated in the media. This story is often of little interest inside the Italian American community, let alone outside of it. Instead, the media focuses on certain themes. In the case of Columbus, a group of mostly white men, who are apoplectic about their allegiance to Columbus and who come off as the bullies of the self-appointed ethnic pride police receive the spotlight. Once again, Italian Americans are typecast as the loud, boorish interlopers, hooligans, who want to debase American culture. 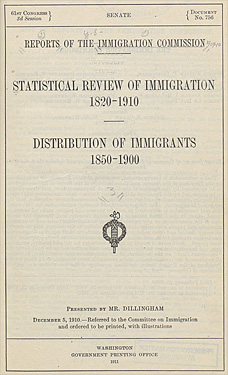 This sentiment was expressed with virulence in 1911 with the publication of The Reports of the Immigration Commission, which presented the results of the “Dillingham Commission” on immigration named after the Commission’s chair, Vermont senator Paul Dillingham. The joint house-senate Commission was charged with collecting immigration statistics and demographics in response to a growing political concern about the impact waves of foreigners entering the country. The resulting forty-three volume report highlighted the merits of the “old immigrants” as opposed to the “new immigrants,” who were seen to have a negative influence on the social, cultural, economic, and moral welfare of the nation. The report had a damning effect on Italian immigration to the United States because it favored the old immigrants who had come from the Northern and Western areas of Europe and warned against the new immigrants who came from Southeastern areas of Europe. The Dillingham Commission found that the new Immigrants to the United States were inferior, unskilled and uneducated who would fail to integrate into the American way of life. The group concluded that immigration from countries in Southern and Eastern Europe posed a serious threat to and should therefore be greatly reduced, if not eliminated entirely. (The exception from the North were the Irish whose Catholicism put them on the unwanted list.)

It is little wonder that the experience of Italian immigrants to America was blighted by discrimination and prejudice. The misconceptions about Italian immigrants continue into the present even though the characteristics of the immigrants who came after World War II are fundamentally different from those who came at the turn of the last century inciting restrictions on immigration. The Report legitimized what many already believed to be the case about the “wretched refuse.” The irony is that those new immigrants about whom the report was written are now the old immigrants seeking to limit migration from places that might alter their way of life. Thus, the Dillingham Commission report remains an exemplary piece of propaganda.

One can appreciate the points made by Ms. LoGiudice and have empathy for her sense of exclusion from such a remarkable ethnic community. What must be recognized though is that feeling like an outsider within the Italian American community is not a unique perspective, just as it is not unusual to endure this sense of rejection in any ethnic community. The number of Italian Americans who hold themselves apart from the Columbus standard bearers is substantial. That we do not have a public voice is not for the lack of trying. There are academics, journalists, and independent scholars pursuing the subject in the form of presentations and publications. Yet, when these folks come together to discuss concerns related to Columbus, or other matters pertinent to Italian Diaspora studies, the mainstream media is nowhere to be found. The thoughtfully presented ideas of Italian Americans that challenge prevailing stereotypes are given no place in a public discourse that clearly has no interest in correcting the stereotypes. When such an event was held at the John D. Calandra Italian American Institute in October 2017 to explore how the monuments and public statues contribute to group identity, there was no one there from the media, outside of one or two niche outlets within the Italian American community. After all, intelligent and provocative conversation from thoughtful, well-spoken Italian Americans does nothing to maintain the stereotypes that abound in Trump’s America.

This is why those in the Italian American community must be vigilant about keeping its own doors open to those with differing opinions. When Italian Americans denigrate each other and discount the presence of disagreement, we fall into the trap of reinforcing that same monolith of prejudgment that keeps us among the old immigrants for whom there is no real place at the table out of fear that we will substantially change the way the table is set.

As the Columbus Day Debate Rages On, So do the Time-Worn Stereotypes

Italian Americans the White’s Clowns? Attacking Your Own Is not the Answer

A Bridge or a Day by Any Other Name