Why it has been so difficult to understand the 1907 tragedy at Monongah in West Virginia?

Now is the time to commemorate the greatest mine disaster in US history, which killed, 110 years ago,  many more Italians than the well-know 1956 Marcinelle tragedy in Belgium.   Italians were almost half of the approximately 360 men who died the morning of December 6, 1907 in Monongah, West Virginia.  In 2003, a series of articles produced by Gente d’Italia provided a valuable service in informing the Italian public of this disaster.  But Italian understandings of the 1907 disaster were shaped by flawed US records  as well as oral traditions of provincial West Virginians and 19th Century Italian migrants. The 2007 centennial commemorations may be excused for their historically flawed expressions and, in Italy, even for inappropriate text, portrayals and monuments.  But the behavior of Italian commemoration entrepreneurs since the centennial cannot be excused.  They have perpetuated and embellished false lore of the disaster and the dead and continue to sacrifice accurate history for the gains in commemorations. They have disregarded mining practices, culture, geography and primary sources – including the 1908 Philadelphia consulate’s warnings about the Italian dead – as well as, of course, published research. They have made farce out of an historic event in US and Italian history. This commentary is offered to scholars and citizens in the US and Italy who will not accept fake news or history and will activate safeguards for their encroachments into Italian school curricula and texts.

The 110th anniversary of the greatest mine disaster in US history should be greeted with shame as well as commemoration – shame in the treatment of the Italian victims by their native elites,  as well as by their US bosses, and certainly by self-appointed commemoration entrepreneurs who sneer at integrity in honoring dead labor. However, Italian centennial commemorations may be forgiven for abetting false history for these were largely dependent on hearsay history, not research knowledge. They may be excused for not knowing Italians survived the explosions or that some Italian miners who were buried in Monongah did not die in the disaster or for portraying  Pennsylvania breaker boys as boys working in the West Virginia mines or for uncritically accepting as fact the lore about post-burial deposits of bodies in a trench in the Italian cemetery  or the legend of unreported dead miners or for not seriously exploring  the lives of widows and children or for misapplying the “buddy system” to the  Monongah mines or for replicating the image and flawed text of a West Virginia memorial road sign and many other failings that were nurtured in oral traditions without corroborating evidence. When Italians visited provincial West Virginia in 2003 they reported what they heard from persons in Monongah who had not read the West Virginia state’s legislative hearings on the disaster, who had not used Italian documents or conducted field work in Italy or interviewed descendants of Italian miners who died or escaped (they didn’t even know the later existed) or who had not explored a nearby university’s archives or had not confronted the wrenching evidence of scattered flesh, not bodies –  but, who, nonetheless, were willing to be interviewed, to proclaim, write, sing, and echo nonsense in many venues. In brief, Italians reported the history of US charlatans, Americans and Italian-Americans alike, from a provincial town in a provincial state.   Yet, even with these considerations, it is difficult to excuse the Italian government placing a monument in the Monongah cemetery, whose text has no empirical support and whose image denigrates dead labor – the Monongah miners.

Also, Italians had neither the time nor the wherewithal to penetrate the sordid depths of West Virginia’s cultural mire and fathom its impact on Italian migrants as well as Monongah knowledge.   A Fairmont historian framed well the nativist view of the Monongah disaster:  “didn’t care about those people.”  This person also pointed out, “I wasn’t even allowed to date Italians.” (My Morgantown nonna kept a gun because she refused to be intimidated by the Klu Klux Klan.) The Monongah disaster wasn’t even part of the Monongah school curriculum. Still, oral traditions of Italian migrants complemented nativist ignorance in clouding Monongah’s history. A history professor in the state of West Virginia pointed out that a major task of professional is cleaning up the mess of legend and myth that constitute local historical knowledge. However, contemporary gate keepers of West Virginia information sift it through the screen of their provincialism, which poses problems for more widely traveled scholars. Monongah was not the place to encourage research about transnational migrants and not the place to acquire accurate information – but it is an easy place to colonize with heartfelt commemorations.

Since the centennial commemorations, behavior, which seems to have its epicenter in Campobasso, has violated core norms of inquiry and decency.  Instead of research-informed behavior,  these charlatans have echoed, contorted, and embellished Monongah myth beyond recognition. The results,  created without research, produced farce. For a few examples: a Molisano gave an interview, published December 6, 2011 in a Fairmont newspaper (104th anniversary of the Monongah disaster) in which he increased the number of dead Monongah miners by over 500 – by counting sailors as miners; as part of the 105th labor-led anniversary commemoration in Campobasso, the number of dead miners was inflated even more and, adding more sham to more tragedy, donne and bambini were placed in the mines. During that same Campobasso affair, the Molisano who counts sailors as miners accepted recognition for research he did not conduct and whose information misled the union bosses who proudly revealed an Italian widow as a Monongah heroine with misguided chauvinist rhetoric and absent facts. 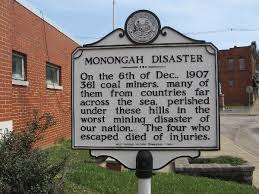 Now, another Molisano, “President of the Monongah Cultural Society,” will participate in the 110th anniversary commemorations in Monongah, December 6, 2017.  Also, top-down orchestrations of commemorations have been organized for provincial paese. Expending resources to honor dead miners may be an honorable way to accumulate political capital – but not if it will be used as leverage for introducing false narratives into Italian texts.   In the meantime we have lost, and are fast losing, living memories in the US and Italy and, of course, the need for their corroboration.  Histories of women made widows need to be constructed through serious research, not casually pilfered, to find their way into credentialed Italian print.   If we hold respect in our hearts for those dead Monongah men – and the kind of people they represent –  memory,  information, documents, goodwill  and, in some cases, even sausage, will be forthcoming  from paese, at least they were in 1983, October, 2017 and many visits in between – but not  if competent investigations are barred access.  The Italians who emigrated to work US mines were of little consequence to their local elites and many preferred exploitation of their mine bosses to what they faced back home.   In any event, their lives were subjugated in both locations – and now they are a treasure and are honored in death.   History is often shaped by political concerns and careers but, in this particular case, it is alienating US and Italians from a shared history. Monongah is too significant an historic event to be left to charlatans, to be left with unrevealed lives – dead miners and women.