The coldly uninviting futuristic ceramic figures, compared to a chess set, have been almost universally reviled as an embarrassment 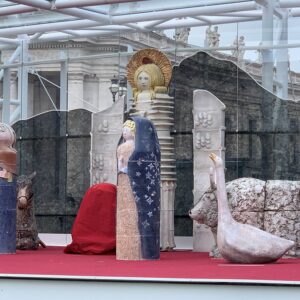 According to St. Bonaventure’s biography, Pope Honorius III gave St. Francis of Assisi his blessing to stage the first live nativity scene in 1223.  It took place inside a cave near Greccio, a small town in Central Italy.  Inspired by his recent visit to the Holy Land, where he’s been shown Jesus’s traditional birthplace in Bethlehem, St. Francis’s aim was to place the emphasis of Christmas upon the worship of Christ rather than upon “material things”.

Such reenactments soon became so popular that within a hundred years every church in Italy reportedly performed the nativity scene at Christmastime.  Before long, statues replaced the animal and human participants. Artistic reproductions of the nativity scenes, made in various sizes and of various materials such as terracotta, papier-mâché, ivory, wax, and wood, quickly became the rage, first in the Papal States–particularly in Naples–then throughout Christian Europe, and from the 19th century, throughout the Christian world in churches, shopping malls, parks, municipal squares, office buildings, and private homes.

Thus, it’s ironic that the first Vatican’s Nativity scene in St. Peter’s Square dates to 1982 during the reign of Pope (now Saint) John Paul II.  For the next 30 years the same statues were used, but the Vatican paid for a new stage setting each Christmas.  Then in 2011, around the time of Vatileaks, arch-conservative Archbishop Carlo Maria Viganò, then Secretary-General of the Governorate of the Vatican City State, and soon after and until 2016 papal nuncio to the United States, insisted that Pope Benedict cut the enormous costs–hundreds of thousands of euros each year–of the Vatican’s crèche.

Therefore, although every year the Governorate still chooses the crèche from a long list of applicants, since 2012 the costs have been donated by different regions of Italy: in 2012 Basilicata offered a town-scape of the Sassi in Matera; in 2013, the first of Pope Francis’s reign, Naples provided a scenario that was a bit over-crowded with too many large traditional locally-made terracotta figures, for Naples is still the capital of crèche artisanry. In 2014, Verona, a scene that was especially moving at night; in 2015, Trento, with figures in traditional Tyrolean dress performing typically local trades like wood carving; in 2016, Malta, a memorial to the terrible earthquakes in Amatrice and Norcia, but also featuring a Maltese fishing boat to evoke the suffering of refugees; in 2017, Naples again with a sort of replica of “Seven Works of Mercy”, the only painting by Caravaggio in Naples; in 2018, the Veneto, the Nativity sculpted out of 720 tons of beach sand; in 2019, Trento again and similar to 2015’s. This year we have one from the town of Castelli in Abruzzo, known for its ceramics as early as the 8th century B.C.

Described in a Vatican press release as “an ode to contemporary art and to the Abruzzo’s cultural history”, the nineteen larger-than-life cylindrical ceramic statues, influenced by ancient Cycladic and Sumerian art, were unveiled on December 11th in St. Peter’s Square. They’re part of a collection of 54 created, using the coiling technique–rings of ceramic stacked in sections like marble columns–by the students and teachers of the “F.A. Grue” Art Institute in Castelli between 1965 and 1975.

The first-made of these were displayed in Castelli’s main square at Christmas in 1965. Still others were exhibited in the Emperor Trajan’s Markets in Rome in 1970; and the whole set toured Israel: Jerusalem, Tel Aviv, and Bethlehem in 1976. They were always admired, no matter where. That is until this year!

Although 2017’s Caravaggesque Nativity was criticized for its nude, dirty, ill, or dead figures, Castelli’s limbless Botero-esque statues with toy-like faces, which look like chess pieces or salt and pepper shakers, were roundly panned, with a vengeance, by most of the Catholic press, on social media, by the Pro-Trump/anti-Pope Francis/Covid-denier/now retired/ Archbishop Viganò and the art critic Vittorio Sgarbi, who both described them as “an obscenity”. 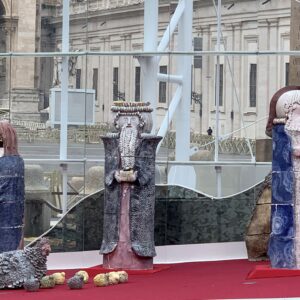 Roman resident and art history professor Elizabeth Lev, whose ultra conservative anti-abortionist mother, Mary Ann Glendon, a professor at Harvard Law School, is a former U.S. ambassador to the Holy See and today President of the Pontifical Academy for Social Sciences, told Steve Bannon’s Breitbart News, “the misshapen figures…lack all the grace, proportion, vulnerability and luminosity that one looks for in the manger scene… The Catholic Church has an incredible tradition of beauty, and yet, after a year of difficulty, we’ve put up something that makes people mock Jesus.”

For a few other examples, Reuters observed: “if this futuristic crèche were a Broadway play, it probably would have closed on opening night”. The London Times reported comments from social media, which called the figures something out of “Wallace and Gromit” and the whole scene a resemblance to “a meth addict’s garage sale”. Most scathing of all, the Catholic Herald entitled its review, “The Vatican’s Embarrassing Sci-Fi Crèche” and blasted the crèche as “a horror show”. Even Vatican News wrote: “One particular figure, which has been described by some as ‘astronaut-like’ has raised numerous questions, as it is not made clear who or what it is representing.”

My research on the internet led me to only two defenders of Castelli’s crèche: one, as to be expected, was Marcello Mancini, a teacher at Castelli’s Art Institute; the other Monsignor Timothy Verdon, Director of the Office of Sacred Art for the Archdiocese of Florence and director of Florence’s Cathedral Museum. “Especially in a year when the COVID-19 pandemic will rule out many people’s favorite Christmas traditions,” said Verdon to the Catholic News Service on December 15, “they have the right to express their dislike of the decidedly untraditional Nativity scene on display until January 11 in the center of St. Peter’s Square, but it might be more edifying to try to understand it….First, people need to recognize that dioceses ask the Vatican to feature their Nativity scenes, and the Vatican City governor’s office makes a choice from those offers many months in advance.  This year probably before COVID.”

“Secondly” he continued, “Pope Francis goes out of his way to surprise people to get them to think, to go to a deeper, more mature understanding of their faith. So, given the pope’s willingness to embrace a challenge, when the governor’s office chose the ceramic Nativity scene from the town of Castelli, it made sense.”

“And thirdly,” Verdon emphasized, “this is not the sweet warm nostalgia that Christmas usually generates, but even in this intimate area of our religious lives, we have to grow in unexpected ways.  As for adding the astronaut and the executioner or soldier, that‘s definitely part of tradition. In Naples, they add political figures, pop singers, and this year Maradona, the Argentine soccer player who died in late November. For not only shepherds and kings go to the manger, but all humanity makes the pilgrimage in one way or another.”

When I first moved to Rome, there were no Christmas trees, a Nordic tradition, so I soon began collecting Neapolitan crèche figures.  Over the years, usually two at a time, some I’ve bought on Via San Gregorio Armeno, the street in Naples lined with crèche artisans; others from a Roman artisan who had a stall in Piazza Navona, and still others in Provence, Bavaria, and Krakow, all important crèche producers.  My collection doesn’t come close to the 6,000 statues collected by Charles III (1716-1788), King of the Two Sicilies, but my passion has to be similar. 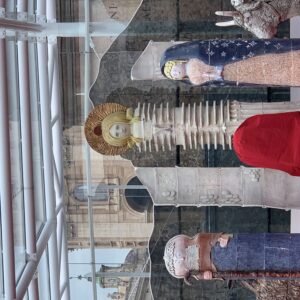 As a member of the Vatican’s press corps, I could have gone to the unveiling, but went on my own the next morning and again that evening before I read all the controversy.  For what it’s worth, here is my opinion. The white metal roofing may protect the statues from rain, but it belongs at the entrance to an airport, shopping center, or hospital, not as the roof of a crèche. At night the lighting is very dim so the statues are in the dark.  As for the stark scenario there is no backdrop and no stable and the statues too few, too far apart and all facing forward in a line-up so there is no story and no emotion. I had no trouble in deciphering the significance of the astronaut, but the identity of the sinister satanic figure mocked as “Darth Vader” was unclear.  He looked too extraterrestrial to be a warrior or a knight or even an executioner.  If his message was anti-war or anti-capital punishment, it was not clear. None of the critics I read mention the inappropriateness of the two turkeys since they are an American bird, certainly unknown in Jesus’s time, and in no other crèche I’ve ever seen.  I’ve also never seen a Madonna with blonde ringlets.  Some Christmas plants in front and around “the stage” would have added some color and warmth to an otherwise bleak and bewildering setting. Since my husband of 49 years is Abruzzese and I have many lovely hand-painted artifacts including some small cylindrical statues of shepherds and angels from Castelli, a lovely medieval town tucked under Gran Sasso. In agreement with Verdon’s viewpoint, I was saddened by the narrow-minded contempt from traditionalists. I hope someday to see all 54 figures on display at once,  but with the statues in a less static, more inter-active arrangement in front of a colorful and pertinent backdrop.