Covid-19: We Know and Manage It Better, But Watch Out If We Let Up!

Updates on the pandemic: what we know, what we assume and what we should do to defeat the coronavirus

SarS-CoV2 is a virus belonging to the family of coronaviruses that cause infections, mostly respiratory. We thought it was harmless; a trivial flu. Instead, we have seen hundreds of thousands of people in need of intensive care, we have seen medical and paramedical staff worked to exhaustion and we have witnessed a severe decline in the world’s economy.

Patients suffering from this infection develop interstitial severe pneumonia that leads to a respiratory insufficiency that requires ventilatory assistance. Scientists immediately addressed the problem: they are looking for a vaccine or a cure while in the meantime they try to reduce the number of victims by using drugs already in use, of which they are familiar with the effect. 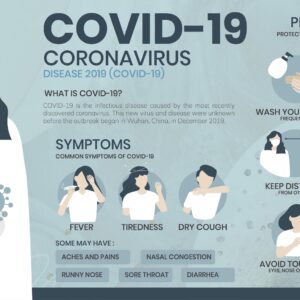 Although they are “off label”, (compounds treat the symptoms of the infection but not the virus) these are our only weapon. Today there are 4 vaccination approaches in advanced experimental stages and many clinical trials to test drugs. To defeat the virus, a global commitment is needed, and at least on a scientific level, everyone is united in order to identify a solution. As far as we are concerned, another topic would be: we die “of” or “with” coronavirus. At present, it was known that the virus mainly killed patients who were already debilitated or who had a series of morbidities. Has the virus weakened?

Why has the number of deaths decreased? The virus has not changed while the population has changed. The frail people will be protecting themselves while the virus continues to exploit the youngest population. Moving from Italy, in fact, we can see that some countries have been forced again to adopt strict restrictive measures and the number of deaths continues to be notable. Americans are spreading the virus like wildfire. The total number of infections reported in the country has doubled in the past six weeks.

Regarding the number of infections, as far as asymptomatic patients are concerned, analyzing the effects of the infection on them, some scientists test a new theory that some of them may already have partial immunity. In America, moreover, particularly alarming is a wave of nearly 100,000 infections reported among children in the last two weeks of July, close to the start of the school year. A new hypothesis emerges: the virus would affect children in dramatically different ways depending on their age. It can inflame the blood vessels of infants and preschoolers, stop the hearts of older children, and can be especially contagious in children with mild or moderate symptoms.

How and why the virus presents such a heterogeneous symptomatology can be explained by various hypotheses: “quality” of health/of the immune system, by the limitations that have emerged regarding some health systems (for example American privatization or poor management of hospital triage in Italy), from the underestimation of the problem, from environmental pollution that already afflicts the respiratory system.

Regarding the first point, the hypothesis that there is a form of defense printed in the code of life has recently been endorsed. More specifically, it is believed that there are a number of gene variants of the HLA gene (implicated in the immune response) that could underlie the susceptibility to Sars-CoV-2 disease and its severity.

Finally, at present, we know how to manage the virus but we still can’t feel at ease. We are not certain that the vaccine will work but we continue to be responsible for ourselves and for others!