Di Maio to the World on Coronavirus: “It’s Ok to Visit Italy… It is Business as Usual”

Italian Foreign Minister Luigi di Maio holds up a map of Italy showing the municipalities in regions of Lombardy and Veneto where it is not possible to travel, during a press conference at the foreign press association, in Rome, Thursday, Feb. 27, 2020. The government is seeking to calm fears about the outbreak, which has seen countries issue travel advisories warning their citizens to avoid visiting hard-hit Lombardy and Veneto regions, which have seen the most cases. (Photo W. Achtner)

Italy’s number of COVID-19 coronavirus cases (on Thursday) now stands at 650, the Italian Ministry of Health says, including 17  people that have died from the respiratory virus. More than 400 of the cases are in the Lombardy region, where some towns are under a lockdown.

Alarmed by the virus’s potential impact on its economy, Italy’s government has urged global media to reassure people around the world that it’s safe to visit Italy.

At a press conference in the Foreign Press Association in Rome, on Thursday, Foreign Minister Luigi Di Maio and Health Minister Roberto Speranza met foreign journalists in Rome in an attempt to play down the seriousness of an outbreak of coronavirus, saying it only concerned a tiny fraction of the country.

“In Italy, we’ve gone from an epidemic risk to an ‘info-demic’ of confirmed disinformation, which at this moment is hitting our flow of tourists, our business and our whole economic system,” Di Maio said.

“The epidemic of misleading information is doing more damage to Italy than the risk of the virus epidemic itself,” Di Maio told reporters Thursday.

The spread of “misleading” reports damages not only the fragile economy of the country —one that has seen three recessions in just over a decade — but also the reputation of its scientific community, the minister added. Italian scientists are “addressing the situation brilliantly,” while the media scare has blown the situation out of proportion, he argued.

Holding up a map of Italy showing the municipalities in regions of Lombardy and Veneto where it is not possible to travel, Di Maio said the outbreak affects only 0.089 percent of the country’s population, including those infected and quarantined.

Twelve regions have reported at least one case of the virus but Di Maio insisted that, “Out of over 7,000 towns in Italy, just over a dozen are affected by this epidemic.” Furthermore, Di Maio stated that, “Just over 10 towns out of 7,904 are involved, and all of the cases we are finding outside of this radius are attributable to the outbreaks in the Lombardy and Veneto regions.”

The Foreign Minister said Italy had more cases than other European countries because it was performing mass tests — over 11,000 so far, which caught positive cases that did not, however, result in illness. A positive result does not mean a person is contagious.

Di Maio insisted that it’s safe to visit the country, saying: “Children are going to school in most Italian regions, and if they can go to the classroom tourists and entrepreneurs can still come to Italy.”

Italy was “reliable and transparent”, Di Maio said, adding it was being unfairly penalized by holidaymakers cancelling trips to Milan or Venice out of fear that they might catch the virus. He further claimed that there was no reason for tourists to cancel visits to Milan or Venice and that, “we will provide the embassies of all foreign governments with daily updates on the situation and the numbers concerning the outbreak.”

Warning against the dangers of spreading fake news about the public health crisis, Foreign Minister Luigi Di Maio told a gathering of foreign press that the economic damage from an “epidemic” of bad information will do more harm than the virus.

The outbreak of COVID-19 in Italy led the U.S. State Department to add concerns about the virus to its travel advisory for Italy this week. The advisory stands at Level 2: “exercise increased caution” – one level short of “reconsider travel.” The State Department communiqué adds: “At this time, CDC does not recommend canceling or postponing travel to Italy.”

Concerns about spreading the COVID-19 virus have also forced dramatic changes at the highest levels of Italian soccer. Several Serie A games were recently canceled — and at least five matches will be played in closed stadiums, with no fans in attendance.

Already, the tourist industry has taken a major hit with a surge in hotel cancellations and industry experts worry that in the United States, Europe and the rest of the world, many potential tourists instead of coming to Italy may be tempted to travel to other countries and book their holidays elsewhere. Several American university study-abroad programs have shut down.

According to the hotel association, Federalberghi, hotel bookings in Milan have plummeted to 20 per cent, compared to nearly 90 per cent normally at this time of year, while in Rome – far from the northern hotspots – over 50 per cent of bookings have been cancelled until the end of March.

And the Italian tourism association, Assoturismo Confesercenti, claims that 200 million euros worth of travel and accommodation bookings have been cancelled in March since the outbreak began roughly two weeks ago. The figure, based on data from Italy’s hotels, B&Bs and travel agencies, doesn’t count lost tourist revenue for transport, tour guides, bars, restaurants and shops. Bookings are also “sharply down” until June, reported Assoturismo.

While many of the cancellations were in regions heavily affected by the recent outbreak, the drop in visitor numbers is also hitting areas where few or no cases have been reported.

“In recent history Italian tourism has never experienced a crisis like this,” Vittorio Messina, National President of Assoturismo, stated in a press release. “It is the darkest moment. Not even 9/11 affected it so heavily.”

“The sector – which is worth about 13 percent of Italian GDP – risks sinking”, Messina said. “If the situation of generalized panic continues, thousands of businesses, especially small ones, will first enter a liquidity crisis, then close their doors,” he continued. “We urgently need to work towards normalization.”

“This is a situation of concern but we must not give in to panic,” EU Health Commissioner Stella Kyriakides told reporters in Rome after meeting Italian Health Minister Roberto Speranza.

“We must also be vigilant when it comes to misinformation and disinformation as well as xenophobic statements which are misleading citizens and putting in question the work of public authorities,” she added. 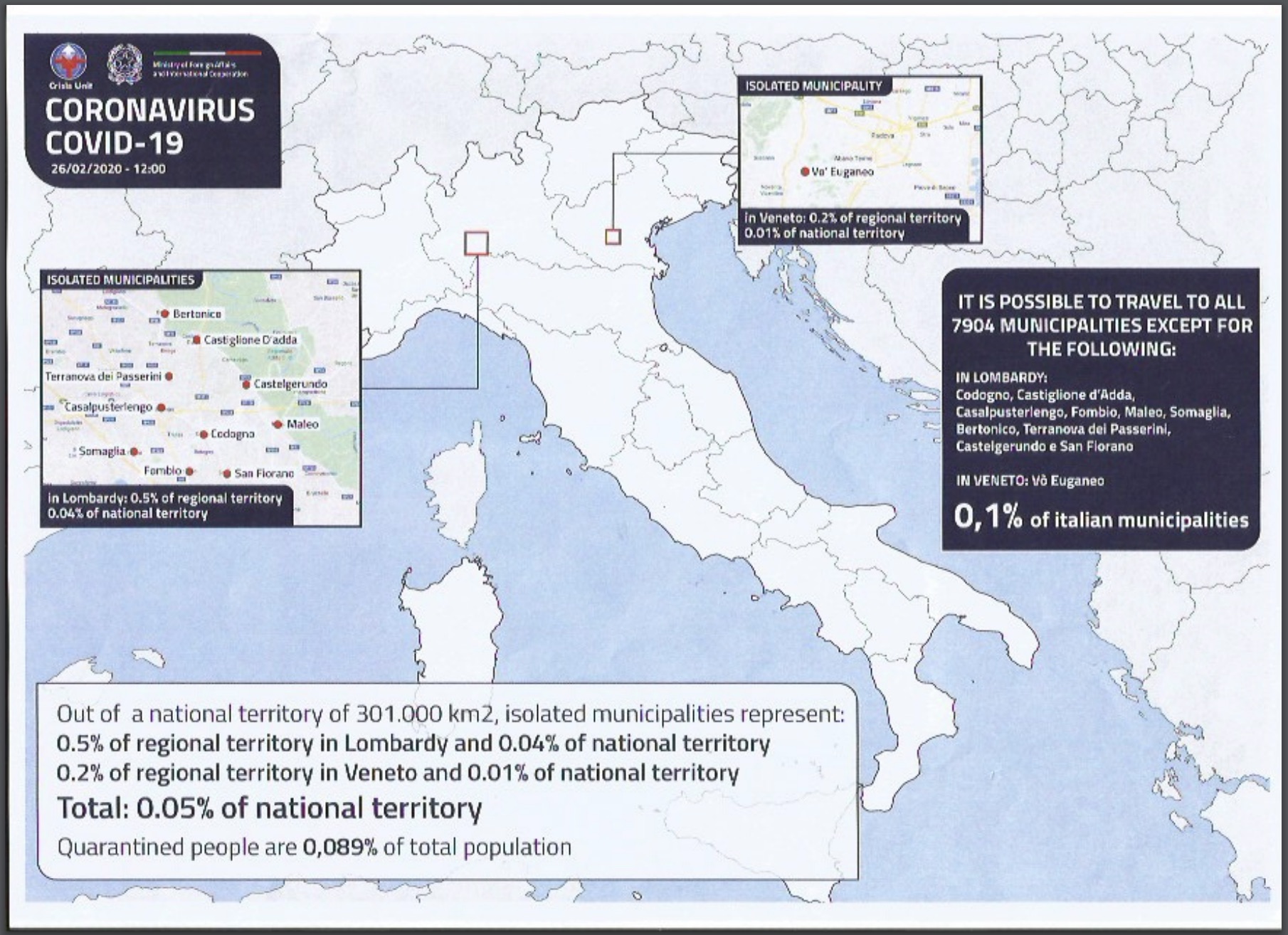 The coronavirus is a respiratory illness which belongs to the same family as the common cold. It’s important to remember that according to the World Health Organization more than 80 percent of those infected will only suffer mild symptoms and recover, while 14 percent develop severe diseases such as pneumonia. Approximately five percent end up in a critical condition.

The initial symptoms are similar to the common flu, and include a cough, headache, fatigue, fever, aching and difficulty breathing.

COVID-19 is primarily spread through airborne contact or contact with contaminated objects. Its incubation period is two to 14 days, with an average of seven days.

In Italy, the health authorities recommend taking the following precautions:

One should not take any antibiotics or antiviral medication unless it’s been prescribed by a doctor.

One doesn’t need to worry about handling anything made or shipped from China, nor about catching coronavirus from (or giving it to) a pet.

“Tell your countries that tourists and business people can come to Italy,” said Di Maio, to the journalists at the Foreign Press Association. “Italy is safe.”