Trump, Pompeo and Europe Are Divided on How to Respond to Tensions with Iran

This past Monday, the US imposed further economic sanctions against Iran. According to President Trump, these sanctions were in response to what he calls “a series of aggressive behaviors by the Iranian regime.” These behaviors include the striking of a US Navy surveillance drone last Thursday and a series of attacks on a total of six commercial ships in the Gulf of Oman over the past few weeks.

Despite these sanctions, it seems that President Trump really wants no part of the tensions in the Gulf where Iran is concerned. When prompted to launch a retaliatory strike against Iran,  Trump – when learning of the potential casualties – confirmed that he called it off last Friday. He tweeted that such a response would “not [be] proportionate to shooting down an unmanned drone.” In the same tweet, President Trump wrote that he would take measures to insure that Iran would not have any nuclear weapons to use against anyone either. Furthermore, Trump insinuated that he might terminate America’s role in securing the Strait of Hormuz. He wrote on Twitter that, “China gets 91% of its Oil from the Straight, Japan 62%, & many other countries likewise. So why are we protecting the shipping lanes for other countries (many years) for zero compensation.” 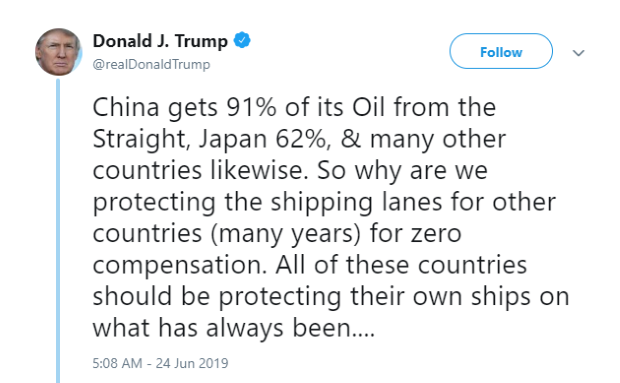 However, the White House seemed keen on garnering support for some form of action against Iran, irrespective of what President Trump expressed in his tweets.  Secretary of State Mike Pompeo voiced his approval in tweets of his own, this past Monday, regarding conversations he had with King Salman bin Abdulaziz Al Saud of Saudi Arabia and Sheikh Mohammed bin Zayed Al Nahyan of Abu Dhabi. He tweeted of his success in promoting “freedom of navigation” in the Strait of Hormuz with both leaders. 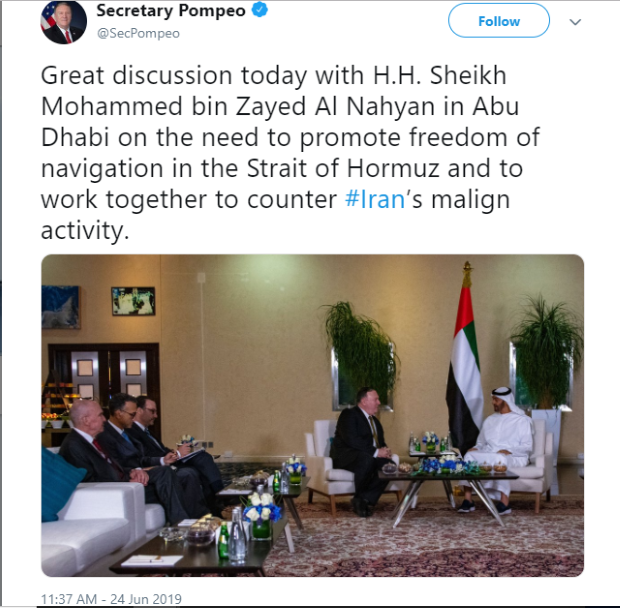 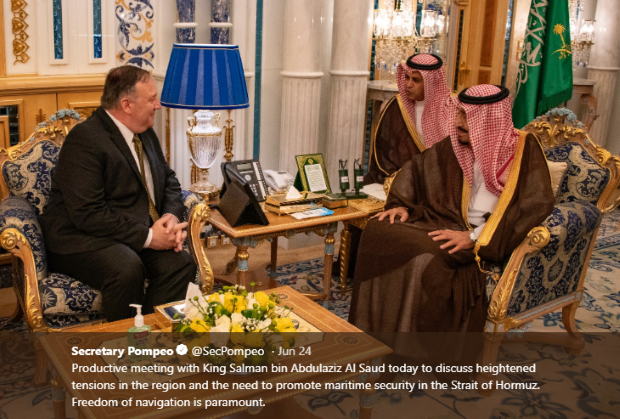 Meanwhile, as the US sanctioned Iran, the Security Council held a closed-door meeting at the UN headquarters in New York City this past Monday. It was held at the request of the American mission to discuss the tensions between the US and Iran, according to UN reports. However, Iran remained excluded from these discussions according to Iran’s Permanent Representative, Majid Takht-Ravanchi.

Following the meeting, Iran Ambassador, Majid Takht-Ravanchi, briefed journalists on Iran’s response amidst US accusations that Iran attacked a US military drone and six oil tankers in the Gulf of Oman. The ambassador categorically denied all allegations of any attack on an oil tanker. As for the drone, the ambassador asserted that it was shot down because it had crossed into Iranian airspace.

When asked if Iran would be open to “dialogue” with the US, the ambassador reiterated that dialogue was impossible when the US was pursuing an “economic war” against Iran. He stated, “you cannot start a dialogue with someone who is threatening, who is intimidating you.” The ambassador insisted that dialogue would only be feasible if Secretary-General Guterres acted as a mediator between the two countries.

Immediately following the Iranian ambassador, the acting US Ambassador, Jonathan Cohen, spoke about the tensions in the Gulf. The acting ambassador wasted no time in explaining that the only possible perpetrator of the attacks in question had to be Iran.  The acting Ambassador asserted that the drone was in the country’s “flight information region,” which is “not the same as their airspace.” Furthermore, he called on “the world to join him” in asserting that “these attacks are unacceptable.”

The ambassadors of Germany, France, and the United Kingdom made a similar, joint statement condemning the attacks. They did not implicitly blame Iran as the US acting ambassador had done. However, they did follow the acting ambassador’s lead in not answering any questions.

We followed up with the ambassadors after the briefing. We asked the German ambassador, Christoph Heusgen, “If it was too late for Iran to go back,” since it seemed it was so for the US, to which the ambassador replied, “It is not too late to go back to [Security Council Resolution] 2231.” The ambassador elaborated that going back to the resolution was the “way forward.” Furthermore, he stated that the “recent escalations have demonstrated that we are in danger of getting into a vicious circle.”

The JCPOA, or The Joint Comprehensive Plan of Action, is a nuclear deal made between Iran and the Permanent members of the Security Council – the United States, Russia, the United Kingdom, France, and China– as well as Germany– that in 2015 was endorsed by UN Security Council Resolution 2331. However, President Trump withdrew from the nuclear deal with Iran in 2018, and since then, tensions have been prevalent.

It is doubtful whether there will be a direct dialogue between the US and Iran. However, it is clear that if action is not taken to resolve the lack of communication, or as German ambassador suggested— SC Resolution 2331 is not revisited – tensions will continue to escalate in the Gulf.

“The Future Does not Belong to Globalists. The Future Belongs to Patriots.” Really?

Was Former GA Pres. Espinosa’s Success Enough to Reach the Helm of UN?