Ukrainians, worried about their families and homeland, tell us their stories. Are the US and Europe doing enough to help defeat the Russian invasion?

“God, when you created Ukraine you gave them so many qualities to be proud of, why is that? Sure, I did, God replied, but look at who I gave them as a neighbor”, says CEO of the Self Reliance (NY) Federal Credit Union Bohdan Kurczak, quoting an old Ukrainian joke. Kurczak believes that despite being known as one of the world’s most literate countries and being renowned for their vast sunflower fields and grain export, his country is destined to forever be hindered by Russia.

As the world follows a potential third world war unfolding on social media, viewing live footage of Russian bombings in Ukraine, and witnessing the gradual occupation of Ukraine’s land, the urge to help, paired with a sentiment of futility, are overwhelming many people living abroad– particularly Ukrainian immigrants and Ukrainian Americans.

Located in New York’s Lower East Side, the tightly knit community of Ukrainian descendants and immigrants is currently displaying sunflowers and national flags in storefronts, on light poles and traffic lights as a sign of solidarity.

On 7th Street, between 2nd and 3rd Avenues, opposite the St. George Ukrainian Catholic Church, the East Village Chiropractic office decked their windows with multiple yellow and blue flags in support of Ukraine. Doctor Taras Odulak, an experienced chiropractor, is trying his best to juggle business as usual while dealing with the progressively saddening updates on his family’s home. “I grew up on this block. New York is where my life is, but Ukraine is where my heritage is from,” explained Odulak. The doctor still has memories of Ukraine being occupied back when he was a young boy. His grandparents found American sponsorship and escaped to the United States, like many other Ukrainians seeking refuge. Odulak’s grandfather was a tailor, his grandmother worked in a button factory and, together, they were fortunate enough to start over and successfully build new lives.

To express his community’s distress, doctor Odulak shared a recent story of one of his patients. “I had a patient come in last week, a young woman named Oksana, who came in bawling. Her mother, who was visiting her from Ukraine as she often does, told her that she had to go back for her sister.” While she would have been much safer here, far away from the war, the mother could not abandon her sister.

“My worst fear is that Ukraine will become a buffer zone between the East and West, a sacrificial lamb of some sort,” says Odulak. In his eyes, the United Nations is relatively powerless, NATO is trying its best, and the grim reality is that unless the US wants to engage in a third world war, they will not send troops to help Ukraine. “What could be done perhaps, is to play the same game as Putin. At first, Putin claimed he was not sending in any soldiers,” adds Odulak, suggesting that the United States could send help in disguise.

Hope, however, is not lost. Doctor Odulak shared that his daughter in medical school raised $5,000 in a matter of a few days. Financial support, according to the doctor, is the best way in which American citizens can assist Ukraine at the moment. The people around him have shown immense generosity, and Odulak feels encouraged by the support.

Much like doctor Odulak, CEO of the Self Reliance Federal Credit Union Bohdan Kurzcak is also holding onto hope. As a Catholic, Kurczak says that while it may not seem like it in the short term, praying is another good way to help Ukraine. “God answers all prayers, some now and some later,” says Kurczak. His credit union was founded in order to assist Ukrainian immigrants with their finances, helping them adjust to American banking systems with the help of bilingual employees.

Born in Astoria, New York, Kurczak remembers his parents having great difficulty when they immigrated to America, struggling to find jobs in the post-World War II US as American servicemen were also returning and searching for jobs.

Unlike Odulak however, many of Kurczak’s friends, cousins and wife’s family members remain in Ukraine. Most of the family, explained Kurczak, have now either moved to Poland or are in West Ukraine, where daily life still appears to be functioning as normal. Nevertheless, Kurczak explained that the same cannot be said about many elderly Ukrainians. “They’re old and this is their land. They’ve seen it all before and they will stand their ground.” One of his work colleagues working in a credit union in Ukraine was on a Zoom call with Kurczak and, in a brief moment of silence between conversations, Kurczak said he could distinctly hear explosions in the background. 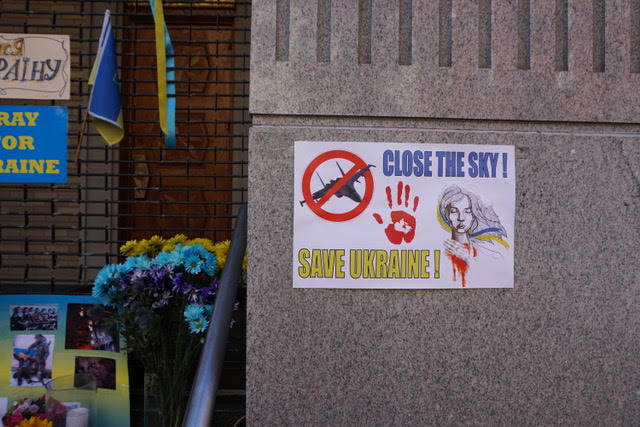 In terms of the United States’ involvement, as an American Ukrainian, Kurczak understands both sides of the story. “Most Ukrainians believe that the US and Europe are not doing enough, they wish they would send in more troops. Intellectually, I understand; emotionally, I do not,” said Kurczak. However, given Putin’s leverage with nuclear weapons, Kurczak is sympathetic to America’s position. In addition, he is relieved to see significant financial support from the United States, military equipment sent by planes to Poland, and European countries like Germany providing Ukraine with weapons.

“I really believe that Putin is mentally challenged,” said Kurczak. According to him, Putin does not understand the extent of the damage that he is creating. Moreover, the United States’ sanctions are going to damage Russia immensely on an economic level, but they might damage America as well. Kurczak believes that Biden should have started with sanctions sooner and believes that the United States will be comfortable so long as it is confident in its own sources of alternative energy. Ultimately, while Russia seems to be a large concern at the moment, Kurczak is more worried about China in the long term. “They’re both sick, of course, in their own way. But while Putin is more volatile, the Chinese government has more control over its people and its growing power is a much bigger threat to the US.”

Ukraine has been occupied before, as Kurczak points out. According to Kurczak, the war will continue to take many lives and Russia will inevitably occupy Ukraine. Nevertheless, he believes that Ukraine will rise again, as it did in 1991. 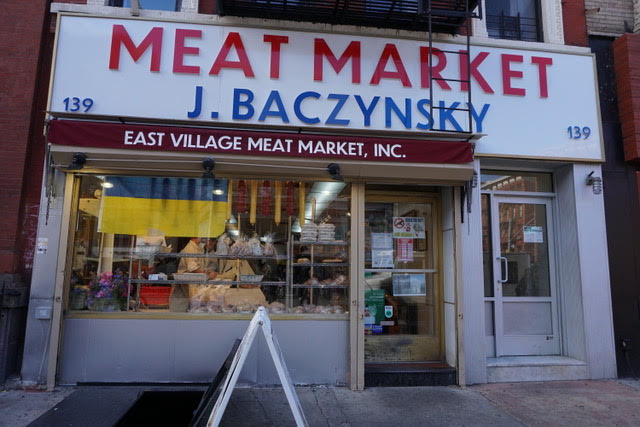 Just a few blocks away, between 9th Street and 2nd Avenue, is J. Baczynsky’s East Village Meat Market, serving house-smoked kielbasa and fresh Ukrainian pierogies that lure customers with their sizzling scent from across the street. This institution was opened in 1970 by Julian Baczinsky, a humble Ukrainian immigrant determined to achieve his American dream as a butcher. Coming out from the kitchen, still wearing his disposable white vinyl gloves, store manager Andrew Ilnicki agreed to an interview despite being evidently tired of the overwhelming press since the war began last week. “Everyone is asking us ‘how do you feel?’ Obviously, not good,’” said Ilnicki. Nonetheless, Ilnicki deeply cherishes his heritage and was eager to share his story.

Ilnicki grew up in Ukraine, raised by a Polish father and Ukrainian mother. Because of his parents’ union, Ilnicki feels closely tied to both countries, despite the tension that existed between Ukraine and Poland after World War II. In 1980, Ilnicki, his brother and their parents all moved to New York. Though Ilnicki has since built his own path as an established butcher in the East Village, he avowed that his brother had entirely different ambitions; Ilnicki’s brother studied theology in Rome in the mid 90’s and was eventually ordained a priest by John Paul II. Similarly to Kurczak, Ilnicki also finds himself praying more often during these trying times, although not so much as to consider joining his brother in the priesthood. “Many people say I should be more religious, like my brother, but we are different people,” said Ilnicki, content with his career.

While Ilnicki reminisced about the many trips he has taken to Italy in the summer, and nostalgically recalled how little it cost to rent a car back then, a friend walked into the store and interrupted his train of thought. Head of collateral management at Wedbush and certified skiing instructor at Windham Mountain Ski School, Peter Nowicki came in with his medium-sized black and white dog Minnie, checking in with Ilnicki and showing his support. Nowicki moved to New York 20 years ago and met Ilnicki through their children’s mutual school, The Epiphany School.

“I’m Polish, but Andrew is one of my closest Ukrainian friends and I wanted to stop by. Historically, Poland and Ukraine haven’t always been friends, especially when Ukrainians were persecuting Jews in World War II— my father was Jewish.” Because of Ilnicki’s dual heritage however, the two friends were able to build a strong bond and Nowicki now feels close to Ukrainians’ hardship.

What Ukraine strives for, according to both friends, is reaching a status of complete independence, like Poland’s. Now, however, Ukraine’s aspirations seem more out of reach than ever before. “Andrew and I have seen it all before and knew the situation before this was too good to be true; we knew something would happen. Putin was a member of the KGB, what he is doing is right out of Hitler’s playbook. What’s different now is the threat of nuclear war; we didn’t have that before,” said Nowicki.

While Nowicki doubts that America will intervene with troops and engage in a veritable World War III, Nowicki predicts that its economy will suffer on an international level. “We are okay. We will take the economy, no matter how high,” said Ilnicki. Those who will suffer the most, added Nowicki in agreement, are the younger generations who have yet to fully build their careers.

Reflecting on the United States’ position and its political strategies in the Russian-Ukrainian war, Nowicki feels disappointment towards the American government. “The no-fly zone would be a huge mistake and Biden should have sanctioned Russia way sooner, back when Zelensky was asking them to, before the war.” Nowicki adds, “The trouble is that Trump was a joke and Biden is simply too old.” Though Nowicki expressed much admiration for Zelensky, he fears that Ukraine alone stands no chance against the Russian forces.

Following this somber conversation, the two friends sighed and smiled at each other knowingly. Before resuming his work in the kitchen, Ilnicki went to fetch some treats for Minnie from behind the counter. The day went on as usual.

Born in Rome, Italy, with parents from Israel, France and the United Kingdom, Lara Dreux was raised in a polyglot environment. An honors graduate in journalism and English at New York University, Lara has written for Modern Luxury and HoneySuckle Magazine. Passionate in Russian literature, fluent in four languages and ever-hungry for international news, she primarily focuses on women’s rights, the denouncement of fascism and art appreciation