Ristoceutics, the Science that Prepares a Tasty Meal that is Functional to Our Health

It would be enough to turn on the stoves of ristoceutical laboratories to improve our diet without taking away pleasure, color and tradition from food

Take food preparation, add nutraceutics, season with lots of scientific method and you get ristoceutics, a new word.  Coined by me in 2016 at the Scuola Superiore Sant’Anna in Pisa (Italy) to indicate a new line of research, it became in 2020 the title of my first book published by Mondadori. But what is it about? I have always believed that food is at the base of human health and well-being beyond being just synonymous with sustenance. And it’s strange to say, but the world of medical science has begun to free chefs from the obsession with the aesthetics of food only a few years ago, respecting food as a natural source of new calorie-free chemical compounds to inspire better health.

If you talked to me about food, I would immediately think of the pleasure of the senses and its accessibility, then to its calories, then to its nutritional value and who prepared it, and finally, to its expiration date.

All this until 2010, when during an experiment I observed that some chemical compounds, also present in common foods, were able to activate vital genes in the cells of the heart so as to protect it. Suddenly, some Mediterranean ingredients that I thought I had known since childhood turned out to be real medicinal foods to be used with care in a balanced diet. Even though science continues to provide the nutritional information on individual foods, we know that at the table we never eat only barley, extra virgin olive oil, blue fish or chicory, pomegranate or annurca apple; rather we associate them. But how?

Once we excluded intolerances or incompatibilities with drugs, today we associate foods on the basis of taste and calories, without knowing anything about their epigenetic properties with which they modulate gene expression without changing the sequence of our DNA.

It is not surprising that an immediate need was to seek and study the associations of seasonal foods in the right quantities, whole or processed, raw or cooked in various ways, in order to create a tasty functional meal that activates protective genes and defuses those that make us more fragile or make us age poorly.

Ristoceutics, as my book tells it, wants to shift the paradigm from food to meal discovery. Despite the fact that “TheFork” magazine has already included ristoceutics among the 20 food experiences in restaurants in 2020, I hope that as soon as possible more and more research laboratories will devote themselves to ristoceutics, demonstrating the epigenetic properties of a functional dish before it is served in restaurants or in the cafeterias of schools and hospitals. Yes, because we do not often hear about synergies, additions or food antagonisms at the table, but it is the task of ristoceutics to deal with them. 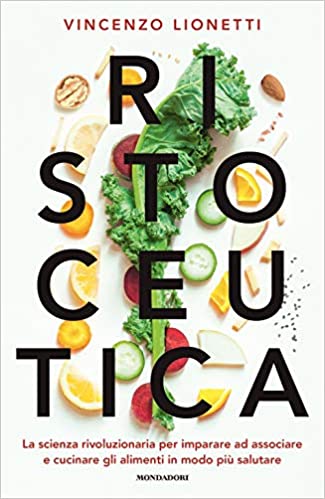 The choice of what we put on our plate could make us more resistant or less tolerant to dangerous disease risk factors, such as obesity, psychosocial stress, pollution or climate change. Ristoceutics will help us not to leave out some functional foods of the Mediterranean diet, such as borage, oil seeds or legumes, able to educate cells to select some vital information making them available and heritable until the third generation. Foods that work as real biochemical switches capable of optimizing communication between our vital organs even while we sleep.

Ristoceutics, as described in my book, is intended to fill a knowledge gap. Indeed, we do not know how the responses triggered by the serving of a single functional food, such as broccoli, can be personalized with the ingestion of other epigenetically active foods, such as salmon or African red tea. Knowledge of a list of individual edible active ingredients, today extracted only to produce supplements, without taking into account the organic matrices in which they are found in nature and the transformations they undergo in the kitchen, is not enough to fully exploit all the superpowers of a meal.

With ristoceutics we will not renounce the benefits of foods discriminated by diets because of the current inability to know how to manage them due to the lack of evidence, and we could also avoid waste. A typical example is red meat, an essential source of vitamin B12, folic acid and essential amino acids. Did you know that looking at their content of omega 3 and omega 6 could spur us to choose them as well as to combine them with the right side dish? And what about milk? Did you know that drinking skim milk is not the best choice because it deprives us of the cardioprotective vitamin K2? What if we combined fermented milk with fiber instead?

In my book I also try to rehabilitate the soffritto, a chemical reaction that is very useful for health if guided correctly.  In addition, there are many examples of associations between functional foods whose effectiveness has been demonstrated recently, although already handed down from peasant tables to those starred for taste. For example, if we combine baked red onions with foods very rich in vitamin C, such as sweet peppers, we would increase the bioavailability of quercetin from onions, a flavonoid useful to fight metabolic and inflammatory disorders because it increases both DNA methylation, making it more stable, and histone acetylation, so as to decipher the DNA with which they are in contact. Yet a meal of onions and baked peppers is already a typical dish of the rich Sicilian gastronomic tradition. But taste does not help us to make the right combinations as well as it does not help us to measure calories and toxicity of a meal. It would be enough to turn on the stoves of ristoceutical laboratories to improve our diet without taking away pleasure, color and tradition from food, but rather enhancing it with the exchange of information between agro-bioscientists, biotechnologists, medical doctors and chefs at the service of a new concept of made in Italy catering.

I like to believe that ristoceutics can also contribute to the discovery of new tastes while developing a functional meal to turn on genes even in preparation for a sporting activity or surgery. It is no coincidence that at the end of the book there are recipes, real research projects just waiting to be studied.

Ristoceutics, the Science that Prepares a Tasty Meal that is Functional to Our Health