As part of the Business Italian Style 2 project, a group of university students interview the general manager of Eataly North America

From an idea originating in Italy, a businessman made this philosophy his way of life and business. The idea is Slow Food, the man Dino Borri, and the work that of head buyer of Eataly North America. We met Borri for an interview on sustainability and Made in Italy, as part of the Business Italian Style project, offered by Montclair State University’s Business Italian course. He received us at Eataly NYC Flatiron after the brutal blizzard of February as we students sought shelter in the warm and welcoming supermarket with a sustainable heart.

Dino Borri is the general manager, brand ambassador, and head buyer of Eataly North America. He began working for the company in 2008. Before his career at Eataly, Borri worked for ten years with Carlo Petrini, the founder of Slow Food, a movement that embraces sustainability, authenticity, and locality of food. Eataly’s slogan, “alti cibi” (high foods) was inspired by the philosophy of Slow Food. Borri explains that the philosophy behind Eataly’s founder, Oscar Farinetti, is an invitation to eat better and less, spending a little more: “quality is not quantity,” Borri tells us. For this reason, Eataly sells fresh and local produce when possible, and imports typical, authentic Italian products, preferring those certified Made in Italy. The company always maintains an equilibrium between authenticity and sustainability. In a nutshell, Eataly sells the food they cook, and cooks the food they sell. 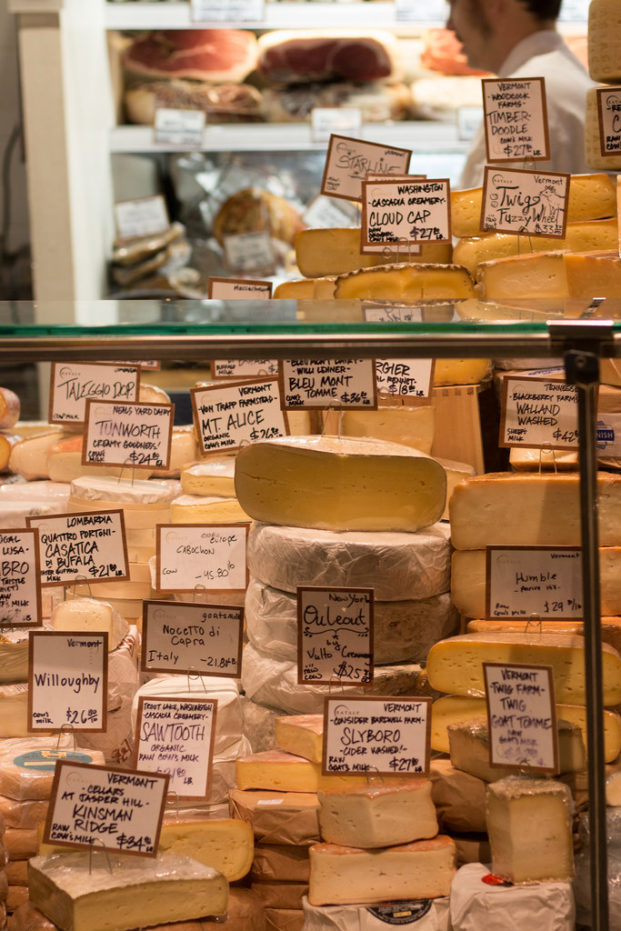 Eataly is one of the largest Italian marketplaces in the world. The company closed 2016 with an income of over 400 millions euros and financial analysts expect Farinetti’s colossus to soon go public. The winner of a number of awards such as “Most Innovative Company 2015” and “International Retailer of the Year 2016,” Eataly has stores all over the globe: Sao Paolo, Munich, Copenhagen, Istanbul, Seoul, Dubai, Tokyo, Osaka and Yokohama, besides the 18 Italian outlets and the 5 in the United States. The company is currently expanding in North America, with two new stores opening soon, one of which in Toronto in 2019. But the growth of the company is also linked to the many initiatives created to spread the culture of food and to promote quality Made in Italy. This is the case of “La Scuola di Eataly” which combines the teaching of traditional techniques with guided food tasting in order to sensitize consumers and make them more aware of the various aspects of good eating.

Borri has crossed oceans for Eataly: he worked in Japan for 2 years, introducing the brand to that nation. In 2010, he moved to New York to launch the first Eataly location in the United States. Today, Eataly has five locations in North America, in cities that, as Borri says, “have a strong Italian community, or a very developed food culture if not an Italian gastronomic culture”: New York City Flatiron, New York City Downtown (opened last summer), Chicago, Boston, and Los Angeles, with a soon-to-be-launched store in Las Vegas.

Despite working all over the U.S. and traveling nonstop, Borri lives with his wife and daughter in New York City. And it’s at Eataly Flatiron that he feels at home. Entering the Flatiron store, we were welcomed by a poster containing Carlo Petrini’s slogan “Good, clean and fair,” the interconnected principles of Slow Food. “Good” because food is a pleasure; “clean” because the production process must avoid the use of chemicals in order not to impact the environment; finally, “fair” because Eataly is a sustainable company that, well aware of the environmental effects, is creating an equitable supply chain for workers and everyone else involved in it.

If we define sustainability as an essential prerogative to ensure the stability of an ecosystem, i.e. the ability to maintain in the future the ecological processes and its biodiversity, then human ecosystems, with their social and cultural processes, can also contribute to the conservation of the natural environment. And Borri is a perfect demonstration of this, as his passion was born in a specific cultural context.

As he himself tells us, his commitment to the cause comes in part from sharing his place of birth with that of Slow Food, the city of Bra, in Piedmont. “Then as my work experience evolved – he said – I always tried to pursue those companies and those situations that allowed me to stay faithful to the philosophy with which I was raised as a boy. Slow Food is an integral part of my family and myself.”

Such a close relationship with food, according to Borri, is the basis of the knowledge necessary to understand how to contribute to personal well-being through nutrition: “We are what we eat, and naturally eating is a fundamental part of human well-being.” However, we must know what we eat, not just for our personal health, but to ensure that what we consume has ethical value, and produces a benefit for both society and the environment. “Education is at the base of everything: with education comes sustainability, and the understanding that a product sometimes has to cost more, because the cost is not just the price, because before you consider the price, you must consider the effects on the environment.”

Talking further with Dino Borri we realized how much the conversation about sustainability can be complex and involve many aspects. For example, an important component of the environment is represented by the creatures that inhabit it. The growing demand for meat is reflected in a constant increase in factory farming, one of the main causes for greenhouse gas emissions globally. Eating less meat and less animal products could help reduce carbon dioxide emissions, and better the environment. Eataly is committed to reducing the quantity of animals raised in factory farming, thereby limiting the environmental effects through good, sustainable practices: “Factory farming is destroying the environment, polluting the air. If we really want to eat meat, instead of eating it every day, we should eat less and diversify what we consume: different types of meat, fish, vegetables.” The life of animals is also something that concerns Eataly: “Our cooperatives are in Montana and Piedmont, and our animals are grass-fed, hormone-free, without additives, raised in a totally sustainable manner, according to animal welfare practices. Well-being should not be for humans alone, but for animals too. If a cow lives happily, it’s better. I always say that our chickens are so good because they’re happy chickens; and if an animal lives happily, it becomes all the more tasty.”

After the interview, Dino Borri took us on an exclusive tour of the Flatiron store, among the food stalls and the restaurants. He described to us the products and flavors – emphasizing their proper Italian names – with enthusiasm and passion: he was clearly in his natural element, using his mother tongue with joy, and he told us that the Italian language contributes to providing the consumer with a more authentic experience, an experience that only Eataly can provide. His words expressed his pride in the company for which he works and its philosophy. Seeing him in action, it’s clear that he is the perfect person for the job.

Interviewing Dino Borri as part of the Business Italian Style 2 project taught us to recognize concepts and values that have always concerned us, but that we did not know how to define or explain. Even those of us who are majoring in biology needed to witness directly the impact that some activities can have on the environment. Those of us instead who are studying business had the opportunity through this course to discover Italian companies that have been able to make it big in America too. Before this course, we thought that “Made in Italy” was a small, hidden label on the back of a product. But Made in Italy is not just a statement of good intentions or a generic fact, it’s a brand and a marketing technique with a philosophy. It tells the consumer that the product is authentic and conveys the values ​​that the brand encompasses. When a consumer is told that the product is Made in Italy, what is communicated is quality and beauty. In one word: desirability.

This is one of the three-episodes series Business Italian Style 2, a project in its second edition, developed by The Inserra Chair in Italian and Italian American Studies (Italian Program at Montclair State University) and La Voce di New York, within the Business Italian class (ITAL321) taught by Enza Antenos. Each of the three parts focuses on the link between Italian food, made in Italy and sustainability. The interviews were designed by the Business Italian students.

The other two episodes of the series:

Here the first edition of the project Business Italian Style.

Lidia Bastianich: Between Two Worlds in Pursuit of Authenticity