40 Years of Italian History: an Interview with Sergio Mattarella’s Biographer

A conversation with Prof. Angelo Gallippi about the book on the private and institutional life of a "proper" President of the Republic

Shortly before the election of Italy’s new President of the Republic, as a jumble of names circulates in parliamentary rooms and party secretariats in Rome, it is time to take stock of the seven-year term that is coming to an end. 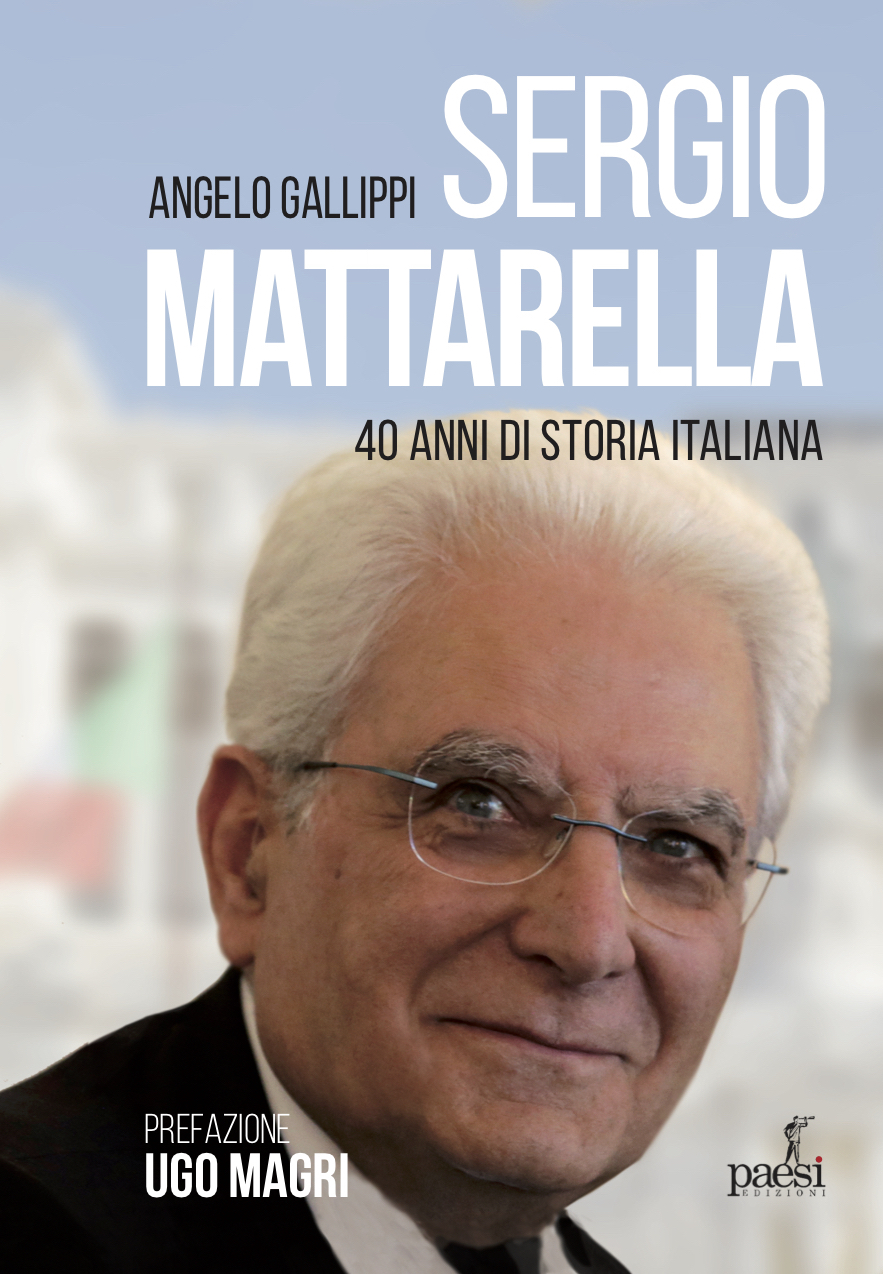 It is therefore with almost perfect timing that Prof. Angelo Gallippi has published Sergio Mattarella: 40 anni di storia italiana (Paesi Edizioni, 672 pages, €18), the first and so far only thorough biography of the Italian Head of State. In his work, Gallippi does not just analyze the turbulent times of Mattarella at the Quirinale year by year – beginning when the former enfant prodige Matteo Renzi was at Palazzo Chigi and coming to an end with the technocrat Mario Draghi at the helm of government. The book also devotes ample space to Mattarella’s previous steps, a prologue of great institutional and moral prestige.

The first chapter is dedicated to the years between 1941-1982, the phase of the “Catholic, lawyer and academic” Mattarella, but also of the dramatic event that fell like a boulder on his existence: the murder of his brother Piersanti, then President of Sicily, at the hands of the Cosa Nostra. The biographical narrative, thorough but eminently readable, then continues with the account of Mattarella’s political activity and human events during the First (1983-1993) and the Second Republics (1994-2008). From the collapse of the Berlin Wall to the war in Kosovo; from the ‘Mani Pulite’ scandal to the investigations into the P2 Masonic lodge (defined by Mattarella as a “perverse temptation to decide the fate of the country in secret“); the reform of the National Council for Economics and Labor (CNEL); the abolition of compulsory military service; the reform of the elementary school system and of the intelligence agencies; the elevation of the Carabinieri to the rank of armed force; the “patto della crostata” between Silvio Berlusconi and Massimo D’Alema; and the dismantling of the “Porcellum” electoral system.

The resulting portrait is that of a faithful servant of the institutions. Of all the institutions, and in each of the three powers of the State, as evidenced by the twenty years of legislative experience in Parliament and various roles in the executive and the judiciary, culminating with his mandate at the Constitutional Court and, icing on the cake, the leadership of the State. “In the season of politicians sprung from nowhere,” writes the quirinalist Ugo Magri in the book preface, “Mattarella embodies a double exception. He has gained experience as a servant of the institutions,” yet very little is known about his private life. Magri calls him, not surprisingly, the “anti-Narcissist par excellence.” For Gallippi, Mattarella is an “arbiter” between the political parties, who was able to represent Italy as well as the national interests in foreign policy.

We talked about this with the author. Born in Rome in 1946, a physicist, Gallippi served as professor of Computer Science at Tor Vergata University of Rome and President of the first Regional Committee for Communications (Corecom) of the Lazio Region. An official of the Guarantor of Privacy and a publicist journalist, he has authored about fifteen books, among which the only biography of Federico Faggin, the inventor of the microprocessor.

Political maneuverers, especially from the center-left, are working feverishly for a second presidential term. Would a faithful servant of the State like him accept a breach of procedure (the second in eleven years) to protect institutional continuity in a critical period?

“In my opinion, he would not. In the book, I have listed the various occasions on which Mattarella expressed his opposition to a second term, motivated by respect for the constitutional dictates. But Mattarella himself also hinted at personal reasons (“I am a grandfather, and to imagine my children or my grandchildren differently, as if they were not part of myself, is very complicated, it would be impossible for me”). And then one should not forget that he is entitled to a pension, which, however, he will never get. In fact, although he is probably the only Italian to have reached ‘quota 136’ (contributions paid since 1965 plus the age of 80), he has renounced his pension as a university professor, and from February onwards he will only receive the allowance of senator for life”.

Mario Draghi or Silvio Berlusconi: who do you think President Mattarella prefers as his virtual successor? And who would he dream of as his ideal replacement?

“The answer to the first question is quite obvious and can be found by reading Mattarella’s personal history, in which there have been many episodes of friction with Silvio Berlusconi. Conflicts, mind you, which were always motivated by purely political and never ethical reasons. On the other hand, Mattarella chose Mario Draghi (to be honest, after having tried with Carlo Cottarelli), to build a government that would pull Italy out of the quagmire in which it found itself, and the success of that choice is recognized not only by the majority of Italians but, above all, by attentive foreign observers.
The answer to the second question is more difficult because only one statement by Mattarella can be found in this regard. Meeting with a class of students in 2018, the question was asked, “Would you be happy if a woman were elected to the Quirinal?”. His answer was: “It hasn’t happened, it will certainly happen, and I hope it will be soon.” Having said that, among the names of the most popular candidates, the only one who has held a “high office of the State” (the fifth) is the former president of the Constitutional Court, Marta Cartabia, while, in the male field, Mario Draghi holds a high office too, of a rank immediately higher than that of Cartabia (the fourth). Of course, this is no prediction, only a hypothesis of what Mattarella might think about his successor”.

Judging from his past, what could be the role of an “anti-Narcissist” like Mattarella after the end of his seven-year term? That of an impartial father of the Nation or of an influential senator for life à la Giorgio Napolitano?

I believe that Mattarella will behave in the same way he has behaved before: a figure removed from party politics (I recall that he abandoned the Democratic Party, which he himself had helped to form, back in 2009, when he was elected to the Presidential Council of Administrative Justice). He will probably be consulted, on a confidential basis, to provide advice in the most difficult moments, but he will certainly shun the visibility which today seems inherent in the work of the politician, and which, unfortunately, has also characterized some of his predecessors.

During his seven-year term, Mattarella has met with and/or been received by as many as three U.S. presidents (Obama, Trump and Biden). With whom does there seem to have been greater harmony? And what relationship has there been with Trump?

“I believe that the greatest harmony was with Obama and Biden, although for different reasons. Obama communicated his good wishes to Mattarella, a few days after the election, with a ‘long and cordial phone conversation.’ Then, in 2016, he welcomed him to the White House, recalling that ‘like me, he was a professor of constitutional law, so we have a strong affinity.’ Finally, he thanked Italy, through its President, for its contribution to the pacification of Iraq. With Biden, whom he met three times, a different kind of empathy was established: that which arises spontaneously between two people who share the same religious faith (Catholicism) and who suffered losses among their loved ones: his wife and two children in Biden’s case, and his wife, a brother and a sister in Mattarella’s case.

The relationship with Trump has been different. The then-US president paid a flying visit to Rome in 2017, which ended without an official statement and was commented on rather formally by the two participants. Mattarella reciprocated the visit in 2019 and, apart from formally thanking him ‘for the invitation and the welcome,’ he did not fail to make some clarifications. To Trump, who had criticized Italy on its poor contributions to NATO (‘Italy pays only 1% of its GDP instead of 2%. I hope it will increase its military spending’), Mattarella replied by reminding him that, after the United States, Italy was the country that supplied the most military troops for NATO missions. He then renewed criticism of the US’s newly imposed tariffs that he had already attacked a few days before in Copenhagen”.

Leonardo Sciascia defined “sicilitudine” (Sicilian-ness) as a “metaphysical category, existential condition, or anthropological state of being Sicilian”. In what way does President Mattarella reveal his “Sicilian-ness” and in what way has he never been “Sicilian”?

“It depends, of course, on what exactly is meant by ‘sicilitudine’: Sciascia claimed that there is not one Sicily, but many. If it means closing oneself up in the family clan, feeling like a region separated from the rest of the nation, preferring one’s own law and justice to that of the State or, as Tomasi di Lampedusa put it, feeling incapable of one’s own creative originality (but these meanings are really stereotypes) then it is certainly impossible to include Mattarella in this category.
If, on the other hand, it means loving one’s own land, believing in intuitive friendship, respecting traditions and ‘commenting on whatever may happen with a witty remark’, as Cicero said, then I believe that Mattarella is deeply Sicilian”.

In the ‘shaky’ balance between justice and politics, what has Mattarella’s relationship with the judiciary been like?

“Mattarella was hounded by some politicians, who urged that he take a more decisive role in relation to the Superior Council of the Magistracy (CSM), even asking him to dissolve it in 2020 when some phone interceptions were made public. He expressed his thoughts in a note, recalling that the President of the Republic can dissolve the Council only ‘in the presence of an objective impossibility of functioning’, while specifying that the reform of the Council required a special law, therefore a task for the Government and Parliament. However, when the Palamara case broke out, Mattarella did not fail to express strong words towards the CSM, expressing ‘serious dismay and disapproval for what has emerged’, as soon as the degeneration of the current system and the inadmissible mixture between politicians and magistrates appeared in all its evidence.

In conclusion: if one had to find a leitmotif or a virtue that has distinguished Mattarella’s professional career and personal life, what would it be?

“I can think of a few subtitles that I had thought of for my book: a ‘proper’ President, ‘highly appreciated’, ‘with a capital P’, but which I then discarded because they were somehow reductive. I think that qualifying a person, any person, with an adjective, is always reductive because this would inevitably leave other important aspects out. In Mattarella’s case, leitmotifs and values are many: the ethical foundation of politics, the principle of the secularity of the State, the commitment of the Christian citizen in political life, loyalty to the spirit and the letter of the Constitution, the fight against the Mafia, solidarity towards the most disadvantaged ‘fellow citizens’, welcoming those who flee from wars and calamities while respecting the law, the indissolubility of the bond between Italy and Europe. Against which, however, he has nevertheless expressed severe criticism.”