Performing four evenings of dance at BAM, Dimitris Papaioannou is a passionate metteur en scène in the contemporary vein.

If we were to consider the artists of the dance theater who today attract the largest audiences not only in Europe but beyond, we would name the Greek, Dimitris Papaioannou and passionately discuss his work.

The news of his imminent arrival at the Brooklyn Academy of Music for the “Next Wave Festival 2019” (November 14-17) with his penultimate work, The Great Tamer, is electrifying. Indeed, this same pièce that debuted in 2017 at the Teatro Politeama in Naples and then triumphed also at the “Torinodanza Festival 2018”,  cheers the Italians who first discovered him; not only thanks to this show, he has already performed at the University of Michigan of Ann Arbor and at the UCLA Center for the Art of Performance in Los Angeles this year. However, testing the taste of New Yorkers and savoring the electric excitement of the city, however, is always an extra gift for every artist.

The same Papaioannou (born in 1964) knows something about it. Having founded an underground company in 1986 in an Athenian squat with the dancer Angeliki Stellatou, the Edifos (earth in Greek) Dance Theater was born and thrived until 2002.  He finds himself in the Big Apple at the invitation of Ellen Stewart, the great lady of the Café La Mama in New York. Here some of his formative meetings can be enumerated. It was back in 1986 that he encountered the already elderly Erick Hawkins (he passed away in 1994), the first male dancer to be accepted into the Martha Graham Company, and for a few years, her husband.

Then he was part of a particular research intertwined with American Indian dances; after that he approached the Japanese aesthetics and Zen thought. And, in addition to the butoh, learned from Min Tanaka, he was fascinated by the research of Maureen Fleming, a Japanese-American, known for the contortions of her white lead solos: the face covered with white lead.   After a second return in New York – during which it was Robert Wilson, already well-known in 1990, to praise his pièces as Medea 2 (remake of a distant 1993 creation for the Edafos Dance Theater), the artist worked out little by little, with his new performers, its so-called “Body Mechanic System”.

It’s a mechanical physical practice far from the butoh’s psychological  contortions in which especially the lower limbs of the body are distorted and illusively broken (even adopted by the choreographer Akhram Khan in Dust, 2014) and highly visible in all four of his now “cult” shows.  From these we exclude the packaging of the opening ceremony (Birthplace, dedicated to Apollo) and closure, in honor of Dionysus (but untitled) of the Athens 2004 Olympic Games, a majestic Gesamtkunstwerk with his trusted interpreters, plus 2428 volunteer performers, which was also the explosion of his success in Greece and world television broadcast.

Where then, does The Great Tamer rank among the four live and cult shows we have mentioned?   After wrestling with Sisyphus (in Still Life, in 2014) and the duet-masterpiece Primal Matter in 2012—a minimalistic duet on the sacred and the profane, in which he himself returned to the scene after an absence of ten years– Dimitris Papaioannou has approached the myth of Persephone in the Great Tamer, his second to  last magnificent creation, convincing him to relinquish the role of true protagonist to the scenography itself. Here the relationship between the Beyond, Hades and the world of the  ‘here and now’, is played out on a narrow strip of ground. Dimitris sets the action in a scabrous, barren space, a huge set of unconnected panels loosely juxtaposed, soon to be raised as partitions and stacked one upon the other, only to be uprooted.

Out of the underlying unknown depths, dismembered body parts, then whole bodies are brought to light, along with white stones, roots (a homage to visual artist Jannis Kounellis, who died in 2017) stuck on the shoes of the first man seen on the stage greeting the audience at the beginning of the performance.    Motionless at the front of the stage, he undresses and dies a good five times, covered by a white sheet placed over him by another performer, only for it to be light-heartedly blown away. Is it perhaps here, through this gesture of repetition, the use of Leitmotiv, that led Pina Bausch’s Dance Theatre to invite the Greek choreographer to Wuppertal? The German company really  needed a singular personality who had acquired eminence, and Papaioannou was and is, unique in offering his graceful yet pungent visions, those uncanny images in the manner of Bosch, and done so with surprises aplenty. 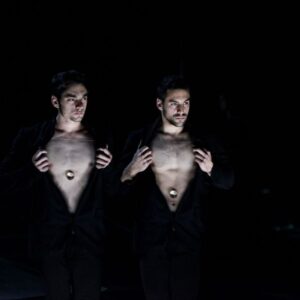 So, thanks to the call by Adolphe Binder in 2018, still Intendant and Artistic Director of the Tanztheather Wuppertal Pina Bausch, he created Seit Sie (Since She) his fourth masterpiece.  Very far from the poetic Weltanschauung of the celebrated and deceased Bausch, he never belies his culture, or his roots, or denies the fact that he is a consummate visual artist (enfant prodige, at the age of three he already knew how to draw as an adult, and at nineteen a personal exhibition was organized for him), plus a tragedian and a Greek at heart. He managed to invent a pièce “in the spirit of Pina”, but rich in a physical-plastic-pictorial concreteness, of references to myth, and quotes, even from the Bauhaus.   The scenic strength of  Dimitris Papaioannou lies exactly in his being first of all an all-around choreographer and stage director  who can surprise and astonish the public with unexpected images such as those in The Great Tamer.

Here a bare-breasted dancer struts, attached to two men, offering her high heels to adorn their muscular legs. Astronauts in white (three, among them a woman) wrestle the beauty of a youth ‘à la Botticelli’ from beneath the ground.  Naked and gracefully feminine, with light, expressive movements, a boy draws the attention of three ladies dancing in golden shawls – but he will come to a sorry end: he will fall into a void, only to return wrapped in plaster.   This earth without Persephone deserves nothing less than the Anatomy Lessons of Doctor Tulp, dressed ‘à la Rembrandt’, all culminating in a cannibalistic symposium on the viscera of the vivisected body. Hissing, death rattles, rasping exhalations, panting, a farewell ‘Blue Danube’ by Johann Strauss – a distorted music background in the guise of a “2017: Odyssey Above and Below Earth” (Kubrick, too, adopted the same Viennese waltz).

All is reflected in the apparition of a large globe, ridden by a dancer, with all ten performers dressed in black climbing upon one the other, forming a mass of humanity, then flying off swinging on ropes in a moment of craziness, or high upon stilts, supported by canes, recalling Goya’s Los Caprichos. Fortunately, the ex-Botticelli youth, no longer in plaster casts, begins a paradisiacal dance: natural grace, blithe poetry. His gestures could go on forever, but Papaioannou knows well that less is more: in the well-balanced dialogue between the extended time spans, silences, Strauss and thunderous rumblings, the choreographer yields to the earth’s awakening; only one sudden, blazing storm of wheat stalk arrows piercing the ground.

It is an invitation to Nature to wake from its sleep, returning to procreation as evidenced by the several male genitalia appearing from underground, merging into a not-in-the least lascivious sculpture before a couple locked in a contorted lovers’ embrace. Soon, the first man who had greeted us on stage disappears into the ground, leaving once again skeletons and desolation. The Great Tamer is like a vanitas, in the pictorial sense of the term, but more than a funeral of beauty it’s full of hope. The last tableau is indeed brimming with auspicious portents. A survivor extracts a small golden cloth from his jacket, the trophy of his struggle with a length of metal tubing, repeatedly blowing it high into the air. Perhaps Time, “the great tamer”, holds unexpected surprises in store for us in the unknown afterlife.