Carlo Levi’s “Blind Visions” in New York: The Protagonists of a Destiny Speak

Antonino Milicia’s story: the immigrant farmer who in Switzerland purchased the drawings of Levi, and of the disciple who assisted him, Gian Paolo Berto.

In 1973, during a period of temporary blindness spent in Rome, between the eye clinic directed by Prof. Bietti and his home, Villa Strohl-Fern, the writer and painter Carlo Levi (Turin 1902 – Rome 1975) produced 145 drawings. Years after his death, these works of art were found and purchased by Antonino Milicia, a Sicilian emigrant farmer who had known Levi in Switzerland. Last week, the exhibition “Blind Visions” opened at New York University’s Casa Italiana Zerilli-Marimò directed by Stefano Albertini, with 42 of these drawings on display for the first time outside of Italy until December 13th.

The exhibition, curated by Nino Sottile Zumbo, and with the participation of Mr. Milicia, opened on Tuesday, September 10th. We spoke with Mr. Milicia the next day at the Casa Italiana, together with Prof. Gian Paolo Berto online, a painter, and among Levi’s favorite students, who assisted Levi during his period of temporary blindness.

Professor Berto speaks to us from Rome, where he has been teaching engraving in recent years at the Accademia delle Belle Arti. In 1973, he was with Levi practically every day while hospitalized at the San Domenico eye clinic. There, Levi produced almost all of his145 drawings using colored markers and pens to create monochrome strokes and swirls of color. At the Casa Italiana, 42 of the most striking drawings are on display (five are unpublished). 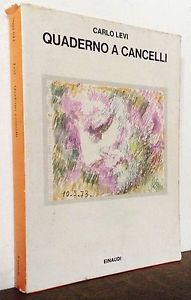 Professor Berto tells us, “Now I’ll tell you how these drawings came about. We had been to dinner in Rome with Carlo Levi, Linuccia Saba, Renato Guttuso, Marino Mazzacurati, and other friends. At midnight, Carlo Levi says to me, ‘It seems to me to be snowing… I see strange things’. I called the doctor and said, ‘the maestro left the restaurant and to him it seems like it’s snowing. Is there something wrong?’ ‘He has to be seen right away by an ophthalmologist…’ Professor Stirpe arrives, at that time he was a young doctor, now a primary. So, we brought him to the San Domenico clinic. Linuccia Saba called me to inform me that we needed to organize something for Carlo during his period of convalescence. So, I read newspaper articles to him. After a while, Levi told me that Gabriele D’Annunzio had had the same problem, and that during his period of bed rest, he wrote Notturno… Levi asks me for a notebook with lines held by wire, so that he could write following the margins….So with the carpenter Tonino Lo Noce, we built this tablet that opened, we inserted the notebook, and there were wire lines. Then I bought him a large graphite pencil and he began to write. Every day I would stay there as he wrote, and that is how Quaderno a cancelli was born, which is a masterpiece that I advise you all to read.”

At this point, Berto continues with his memories: “While he wrote, Levi said to me: ‘I could also draw’. And I replied to him: ‘of course, maestro’. And so we got another tablet. He would place his hand to feel the space, and he would produce the drawings that you now see displayed at NYU. I would buy him the felt-tip pens, and we made a small workshop in the San Domenico clinic”.

That is how Levi would draw every day, “at times even five or six drawings in one day, and on other days, not even one”. For Berto, “those drawings are a testament to the fact that you can continue to work even under grave circumstances”.

Here, Antonino Milicia adds, “Yes, there is description on 80 drawings. But not on all of them”.

We ask: So, Carlo Levi doesn’t ask to see the drawings that Linuccia Saba took away in the meantime? “He was already past that by then”, states Berto.

Going back to when Levi was drawing in the hospital, we asked about what inspired him. “We would talk about everything, and he would draw, and anyway, he, in reality, who could not see, saw more and saw better than those who could see”.

We ask Prof. Berto if he thinks it’s normal that in Italy — in order to save an artistic heritage, such as the drawings of Carlo Levi during his period of blindness — a Sicilian farmer that had emigrated to Switzerland had to intervene, purchasing and conserving them for years in his barn. Was this a miracle? Here is Prof. Berto’s response: “There is no explanation for this story. In reality, karma exists. It was a just thing that Antonino Milicia should have these drawings. That’s it. What had happened was already written by destiny. We are all tied to a destiny that has already been written”. Therefore, in your opinion, when Levi was making these drawings, was he already hoping that their story would turn out to be as has occurred? “Of course! He would not have written Words are Stones: Impressions of Sicily, The Future Has an Ancient Heart, All the Honey is Finished and Quaderno a cancelli (gated notebook), had he not thought about this”.

These drawings, salvaged by the emigrant Sicilian farmer Nino Milicia, and that are now in New York on display at NYU’s Casa Italiana, in the city that Levi had visited – all of this was pre-determined destiny? “Of course. Now let me give you some advice: organize a conference in New York and invite eye specialists and show them Levi’s blind drawings and tell them that they were created by an Italian writer-intellectual-painter during a period of blindness and have them explain them to you. It could be something interesting in order to understand the possibility of helping other people”.

At this point, we ask Antonino Milicia to continue this extraordinary story. He tells us of the emotional evening of the exhibition’s opening: “I was so moved, I would have wanted to say more, and I am not sure that I was able to say what I wanted to. I was moved by Prof. Stanislao Pugliese’s words, by how much he was able to convey about the suffering that was endured during Fascism. But even when he spoke about us emigrants, of when he spoke of how Levi confronted the Southern Question. In Zurich, we were treated like dogs, humiliated, kicked”. 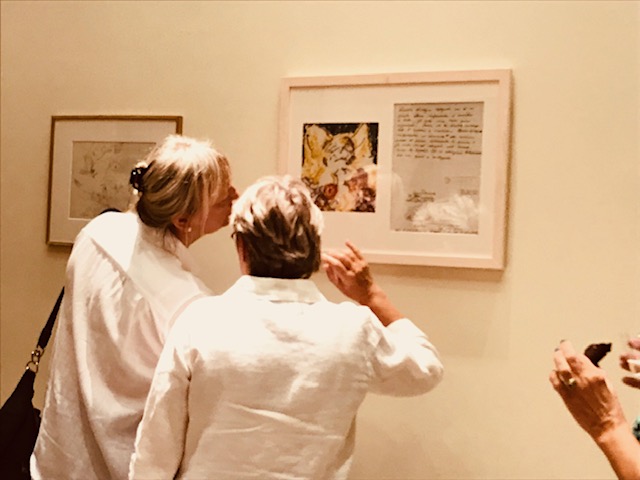 It is in Switzerland that Antonino has that fateful encounter with Levi. “I had arrived in January of 1968. I did not know the language, nothing. One day, other emigrants tell me that we had to go to the train station to welcome Carlo Levi, who was coming to Zurich to help us organize. It was love at first sight. I didn’t even know who Levi was, and from that moment I was impressed. He was there for a convention, but he spent time with us, at the Casa Italia. From that moment, I regarded him as a role model. I was ashamed because I was not educated, I did not want to study. But Levi said to me, ‘Try to always be yourself and don’t let the freedom that you have get stepped on’. In other words, he wanted that I be whole, that which I was, in all things. Don’t let your freedom get stepped on. He didn’t say that only to me, he said it to everyone. It was moving. He spoke man to man, and he gave us strength and dignity”.

Then the destiny of saving those drawings that Levi produced a few years later, during his period of blindness was fulfilled. How did it come about? “It happened that my sister was decorating her house and I was helping her. At a certain point, we needed a sculpture for a corner. And I came to find out that one of Levi’s works was for sale. I went off to Rome right away to purchase it. I became friends with Lionello Giorni,  [Linuccia Saba’s husband, Levi’s lover, who inherited the drawings, Ed.] and I cooked some fish for him that I had brought from Sicily. He gave my cooking five stars and we became friends. And in the end, he showed me the drawings. He told me that he had shown them, and that he had been told that they weren’t marketable. But I instead understood right away that they had great historical worth. Far from doodles!”.

Antonino takes us around the Casa Italiana and he again is moved looking at, and describing those drawings that he rescued by purchasing them. We ask him, “are you happy that they are here on exhibit in New York?” and he replied, “I’m happy because it was the Americans that discovered Levi, with Christ Stopped at Eboli. Carlo Levi was too inconvenient in Italy. I’m happy that the Americans are the first ones outside of Italy to get to know these works. They are works that stimulate love towards Italy, something that Italians themselves don’t have. And in fact, what does Carlo Levi tell us, and I am moved by stating this, it is you emigrants that carry the weight of the cross, you, rejects of Italy. He sees the rejects of Italy in the Italians that are abroad, that are exiled the same way he had been in Lucania. I very much want to point out that he gave us strength at the time to fight and to forge ahead”.

As lawyer Nino Sottile Zumbo told us — curator of the exhibit that also  “discovered” the story of Antonino Milicia and brought it to New York —   “the drawings, small figurative and abstract masterpieces, recount with images that emerge from the depths;  the dark period of blindness and the experiences of the artist. They are a part of it: the self-portraits, sweet and bitter; the faces of loved ones and places close to the heart; the illustrations and symbols that interpret his vision of things. The drawings of blindness are interpreted by Levi in his autobiography Quaderno a cancelli, written during the dark period of 1973 and published posthumously by Einaudi in 1979”.

Zumbo adds, always subtly: “Levi called Quaderno a cancelli a particular tool designed by him during his period of blindness: a wooden notebook in two parts, hinged together, equipped with metal strings that sectioned it to guide his hand so that he could draw and write”.

And then he concludes: “Levi would repeat: With paintings, I question myself, with writings, the world. What is the most important teaching of Carlo Levi on the arts? Artwork is not something to admire, but an experience to live; you can only see it well with the heart”.

The Swimmers: The Netflix Biodrama of Two Sisters’ Harrowing Journey to Safety

Cartoon of the Week/84