At the Jewish Museum: "Leonard Cohen: A Crack in Everything", an exhibit devoted to the legacy of the Canadian singer/songwriter global icon

Be prepared to fall in love with Leonard Cohen (1934-2016) at the monumental exhibit Leonard Cohen: A Crack in Everything at the Jewish Museum entirely devoted to the legacy of the singer/songwriter, and global icon from Montreal, Canada.

The exhibit occupies two floors and part of the third — more space than ever dedicated to one exhibit — of the French Gothic Revival style Warburg Mansion on Fifth Avenue that houses the Jewish Museum on view April 12 through Sept. 8, 2019.

Not a fan? Think again, or better yet, let your senses guide you, forget thinking.

For fans, this is a mandatory pilgrimage. Claudia Gould, director of the Jewish Museum remarked, “This is an exhibit that is cross-generational, about a life not a beginning and not an end …”

Ruth Beesch, Senior Deputy Director of Programming and Strategic Initiatives at the Museum, stated that, “This is a culmination of the ‘best of the best’ of what appeared in the exhibit at the Musée d’art contemporain de Montréal (MAC) in Montreal, Quebec.”

That exhibit was curated by John Zeppetelli and Victor Shiffman, both of whom attended the press preview. The MAC show featured more than 40 visual artists, filmmakers, musicians and performers who revisited Cohen’s oeuvre.

Zeppetelli recalled the initial idea of featuring this rich, powerful figure who was an Anglophone Jewish artist in a French-speaking city. When he and Shiffman reached out to Cohen, knowing how he guarded his privacy so ferociously, Leonard Cohen responded that he would not get “in our way.”

Follow the dozen artists’ multi-sensory, immersive installations but don’t expect the exhibit to be stocked a mile high with memorabilia, dusty notebooks and coffee-stained blotters – the installations are alive with imagination, respect, appreciation and sound.

Instead, you will hear Cohen’s opinions, his quips, his poetry, his foghorn-voice singing the same songs at various ages, showcasing his and our mortality.

The wall texts follow the arc of Cohen’s life as a child, the loss of his father at age nine, its high and low points, and his comeback after having been away 15 years from the stage.

Soon after college, he purchased a house for $1,500 on the Greek island of Hydra where he met Marianne Ihlen, the companion who inspired him to write the song So Long, Marianne.  This was a prolific period for him as he published two poetry collections, The Spic-Box of Earth and Flowers for Hitler, as well as two novels, The Favourite Game and Beautiful Losers.

Robert Kory, his last manager and the executor of his estate, said he had been familiar with Cohen as a writer of fiction and poetry but he felt Cohen had grown and refined his role as a performer during his triumphal return to the stage that included a world tour, 2008-2014.

Cohen had been absent from the stage for 15 years after being defrauded by his then longtime manager, but the first tour, 2008-2010 was a major success. He launched his final and 13th album, Popular Problems in 2014.  It featured mostly new songs and was warmly received by critics.

“He was very modest, and what most people do not realize is that he performed for maybe 5.5 hours – soundchecks took 1.5 hours – the band was so perfectly rehearsed that it always seemed to have achieved a sort of communion on stage.”

Of the exhibit Kory said, “I was all about taking him from the intimate to the iconic – he became the 6th top arena act in the world and as recently as 2012 he played at Madison Square Garden and the Barclays Center.” Kory added that, “… it is intimate and enormously satisfying.”

Cohen makes no bones about it: He wanted to be loved by as many people as possible. When asked about his reputation as a ladies’ man, he answers rhetorically, “It’s a curious reputation.” It is even more curious if you figure in his time spent as a Buddhist monk, but there is no doubt that women have played an important role in his life.

Of love, Cohen has  said:

“Your heart cooks like shish kabob, your breast sizzling and crackling until it is too hot for the body … love is the most challenging activity you will ever experience – defeat, acceptance, exaltation and if you have a fixed idea about it, it will definitely cause a great deal of suffering … we cannot help falling in love, not just with each other but with dreams, ideas and principles…love calls you by your name … it is the only game in town.”

Besides the incredibly detailed wall texts that the museum is known for, the first floor features Hong Kong-born George Fok’s large-scale Passing Through that draws on a vast archive of audiovisual material paying tribute to Cohen’s five-decade-long career as a singer/songwriter and performer.

A major participatory installation, The Poetry Machine, invites visitors to play a Wurlitzer organ with individual keys summoning audio files of his poetry, recited by Cohen himself. His voice emanates from old speakers and gramophone horns that surround the organ.

Another installation centers on his amazing comeback album, I’m Your Man, featuring 18 ardent fans singing the entire record, accompanied by the Shaar Hashomayim Synagogue all-male choir representing the synagogue Cohen belonged to all his life.

Don’t miss Ari Folman’s Depression Chamber that allows one visitor at a time (sign up for time slots upon arriving at the museum) to lie down, facing an image of themselves on the ceiling and surrounded by the demons of depression. Cohen’s Famous Blue Raincoat plays while the song’s lyrics are projected on the walls, slowly morphing into letters and icons that symbolize Cohen’s thematic universe.

Heard There Was a Secret Chord is a participatory humming experience to Cohen’s Hallelujah, where real-time online listener data is transformed into a virtual choir of humming voices. The number of voices played back in the gallery corresponds to the online listener count visible on a numerical display. 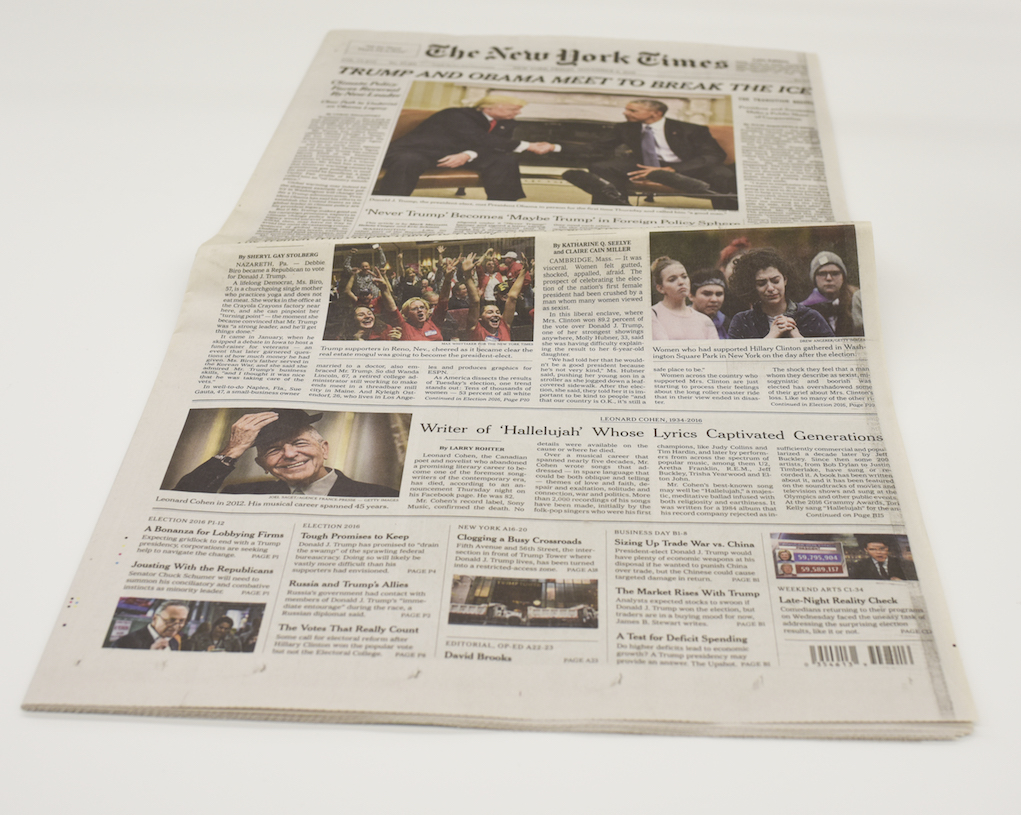 The only installation that is not high-tech is Taryn Simon’s The New York Times, Friday, November 11, 2016, the date the obituary appeared on the front page alongside a photo and article describing the first face-to-face meeting between Barack Obama and then-president-elect Trump.

Cohen died on Nov. 7, just one day before Donald Trump was elected the 45th president of the United States. Other front-page items included The Market Rises with Trump, The Women Who Helped Trump to Victory and Those with Dreams that were Crushed.

In the photo accompanying the obituary, Cohen lifts his fedora in a gesture of greeting or farewell we are on our own now.

The exhibition takes its title from Cohen’s song Anthem from the album The Future (1992):

Ring the bells that still can ring
Forget your perfect offering
There is a crack, a crack in everything
That’s how the light gets in.

In this song, Cohen suggests that there is always room for redemption and hope, because that very crack is what lets in the light that allows life to grow.

Finally, Listening to Leonard, a room where visitors can hear 18 recorded covers of his songs produced, arranged and performed by international musicians and vocalists, is where you may want to end your journey. People may be inspired to sing along and dance as if no one is watching, an act Cohen would have approved of.

During the run Leonard Cohen: A Crack in Everything, the Jewish Museum, located at 1109 Fifth Ave. at 92nd St., will open one hour earlier than usual on Saturdays and Sundays from 10 am to 5:45 pm.

The exhibition will remain on view at the Jewish Museum from April 12 through Sept. 8, 2019. Following its New York showing, the exhibition will tour to Kunstforeningen GL STRAND and Nikolaj Kunsthal, Copenhagen, Denmark (October 2019 – February 2020) and the Contemporary Jewish Museum, San Francisco (September 2020 – January 2021).