SR Film Festival Opens with Germany, Closes with Italy and Embraces the World

We have had the chance to say it many times: New York is the city of film festivals. Overabundance does not seem to discourage their proliferation — nor the closing-down of popular movie theaters. The trend goes on, unaltered, to our delight, and to the numerous movie-addicts’ living in the city.
One of the lot is the Socially Relevant Film Festival New York, this year at its 5th Annual — no new-by on the scene. It will open on Friday, March 16 with the feature film Lou Andreas-Salomé: The Audacity to Be Free, an award-winning German production by Cordula Kablitz-Post — Best Film at the NDR Young Talent Awards 2018. And it will close on Thursday 22 with Talien, an Italian production by film-maker Elia Mouatamid that received a special mention in prestigious Italian Silver Ribbons (Nastri d’Argento) 2018. 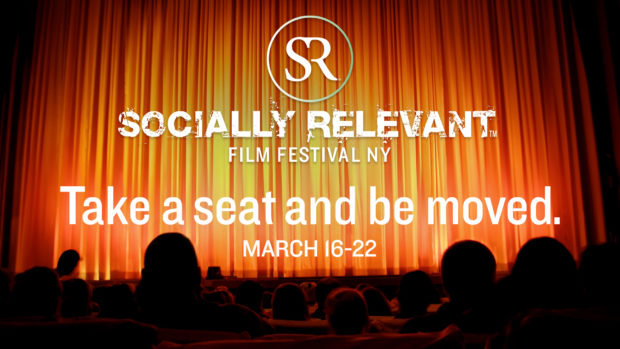 Founded by actress Nora Armani, SRFF New York is a non-profit film festival whose mission is “to shine the spotlight on filmmakers who tell compelling, socially relevant, human interest stories, across a broad range of social issues,” as Armani cared to emphasize during the press conference at  Doux Supperclub, last February. “The festival was created as a response to the proliferation of violence and violent forms of storytelling in media and entertainment. SR Film Festival believes in the power of cinema in raising awareness towards social issues and promoting positive social change. During its first four years, we showcased 207 films from 35 countries, and submissions are received from all over the world.”
Festival Founder and Artistic Director Armani went on illustrating the program for 2018, “Among the officially selected films to be screened downtown Manhattan — Cinema Village, SVA Social Documentary Film Campus and CRS (Center for Remembering and Sharing) — are a diverse mix of five narrative features, 15 documentaries, 38 shorts, 10 VR/360º films and more. There is also a script-writing contest and readings of excerpts from finalist scripts,” and she stressed, quite beaming, “We are very happy with our fifth year’s selection.  We have been able to incorporate more films, and have been able to hone in on specific social issues in more depth. This year’s festival goes back to basics: the filmmakers, the films, and the issues, with a number of interesting partners and sponsors accompanying us.”

So in-between the opening and closing nights, a plethora of movies covering four categories, 35

countries, and side events which will widen the cinematographic offer. Of special relevance, the Spotlight Panel celebrating women on Monday 19, “Women, Gender Equality, Human Trafficking,” featuring a screening of short films followed by a keynote discussion with Ambassador Swanee Hunt, Founding Director of the Women and Public Policy Program; Ruchira Gupta, Founder and Executive Director of Apne Aap — an organization that rescues women and girls in India from sex-trafficking and is SRFF partner for the event; Simone Monasebian, Director New York UNODC Office; Felicia Greenfield, actress and activist, and Jessica Vale, filmmaker and activist.

The main slate with its “Narrative Features” boasts five US premieres coming from every corner of the world — Darcy  and Love (USA), Find Your Voice (Australia-New Zealand), Hot Country, Cold Winter (Germany, The Netherlands, Armenia), Lou Andreas-Salomé: The Audacity to Be Free (Germany).
The latter is not to be missed if you like stories of independent educated and brilliant women of the 19th Century. Lou Andreas-Salomé’s wits and charm conquered Europe’s greatest minds of the time, including Friedrich Nietzsche, Paul Rée and her lover, poet Rainer Maria Rilke. An accomplished novelist, poet, and essayist, as well as first female psychoanalyst under Sigmund Freud’s tutelage, Salomé professed her desire to live a life freed from conventions, and braved sexist society of those days. The biopic’s worth lies in the rediscovery of such a bright thinker — who also happened to be a woman — and in the dissemination of her story. It will intrigue anyone interested in philosophy, history and well, strong-minded women.

As mentioned above, the documentary section prides itself on Talien, a movie that investigates film-maker Elia Moutamid’s relationship with his father. Elia was born in Morocco — Fes, to be precise — in 1982, and the year after he moved with his family to Brescia, Northern Italy.
A road trip by van from Lombardy all the way to Morocco, via France, Spain and the Mediterranean Sea, Talien is concurrently an emotional journey retracing the choices Elia’s father has made over a lifetime, and have affected his family. An intimate tale unfolding on the road back to the land of origin, which also intertwines current national concerns like immigration, lack of work in Italy, racism, displacement and belonging.
“If you were in your thirties now, what would you do?”, asks Elia to his father, who emigrated to Brescia at the beginning of the 80s and found his Promised Land there. “I would emigrate,” is the blunt reply he shots at his son, who is not able to come across a job in 2017 Italy. “If you can’t find anything here in Italy, why should you stay?” further comments the father with a legitimate question that also underpins the choice of ever so many Italians who decide to leave the country nowadays.
The documentary treasures other similar gems, which push the audience to think about relocating, growing new roots, mixed feelings towards the “new” arrival country and the lost — much missed — “old” home country.
“The place where you are born stays with you for the rest of your life,” states the father at the end of the movie. Poignant words which pierce through the heart of any listener who is also an expat.

In the same section, another documentary addresses immigration by going back to the so-called door to

Land of Plenty America. Ellis Island: The Making of a Master Race in America by Robert Tutak, premieres on Monday 19 at 9:30 pm — in the presence of the film-maker — and documents the influence of American eugenics and the ideology of Nordic supremacy and race purification on the U.S. immigration policy in the early 20th century and beyond. Robert Tutak tells the story of Jan, his grand-grandfather, through Jan’s fictional voice. With the dream of dreamland America floating in his eyes, Jan crossed the Ocean in 1909 hoping to let a poverty-stricken existence behind his back, to enter the US and start a new life. Unfortunately — or maybe not — after being forced to undergo mental inspection at Ellis Islands, he was labeled “an imbecile,” and was deported back to Poland. Jan’s voice alternates Ellis Island Commissioners’, staff’s and eugenics’ of the time, building up a sort of vocal ensemble, which is visually paralleled by the collage of archive pictures, documents, letters, newspaper clippings and articles that the film-maker has patiently retrieved and aptly put together to shape this tragic fresco on “how it worked for immigrants back then.” The result is a one-of-a-kind documentary unveiling the physical and psychological atrocities perpetrated on the immigrants arriving Ellis Island at the beginning of the 20th Century. Ellis Island: The Making of a Master Race in America also serves as a warning towards our current times. Tutak does not shy away from drawing associations between Nazi supremacist beliefs, and certain recent “butades” by Donald Trump towards Mexican and Muslim immigrants. Two pearls of presidential intellectual sophistication like “Why do we want all these people from shithole countries? Why don’t we get more people from Norway?” glaringly exemplifies that past is not past.

The script writing competition of SRFF 2018 is also worth considering as it features readings with actors, in the presence of the scriptwriters, from the seven finalist scripts. Other workshops and panels on offer include industry forums, an engaged theatre workshop, and a live music performance to silent films.

As far as workshops are concerned, they are free of charge — like the panels — and open to all filmmakers and members of the audience. With titles like “Editing your Documentary Footage, “Sustainable Film-making” and “Measuring the Impact of Documentary Films,” they address emerging film-makers, but may also engage non-pro common audience who is just curious to see how things work behind a camera.

And last but not least, the themes for selected short film groupings — Ageing Gracefully, Dreamers Having a Nightmare, Sustainable Communities, Where is Home?, Whose Disability? — tackle burning hot questions and are most certainly food for thoughts.

Socially Relevant Film Festival 2018 has all the necessary assets to captivate audience by bringing forth issues we, as NYC citizens, movie-goers and primarily human beings, should not fail to be concerned about.

The readers of La Voce di New York, who also happen to be movie lovers, have the chance to win two all-access passes to the Festival, two pairs of tickets to the screening of Talien, and one pair of ticket to the Closing Awards Ceremony on Thursday 22 as well as to the closing film right after it.
To participate, send an email to svaccara@lavoceny.com with “SRFF 2018 – Free Tickets” in subject line.
Give it a shot, and good luck!