“The Godfather” is regarded as one of the greatest movies ever made, or at least the first two entries in the saga of la famiglia Corleone (Part III, which director Francis Ford Coppola admitted he made for the money, got no love at all, from critics or fans, when it opened, and time hasn’t inspired a retrospective reevaluation). But the cinematic milestone almost never happened. “Godfather” devotees know that Paramount was wary of making another gangster film after “The Brotherhood,” with Kirk Douglas as a Sicilian mafioso, flopped in 1968. They also know that Paramount wanted to make the film on the cheap, shoot it entirely in the US, and without Coppola or Al Pacino.

But it still was fun to hear Coppola and Pacino tell the stories of their battles, near-losses, and ultimate victories forty-five years later, during a panel discussion presented by the Tribeca Film Festival on April 29 at Radio City Music Hall (and livestreamed on Facebook). The Corleone family sitdown was held after a screening of the first film, on a stage set that suggested Vito Corleone’s study. There was a framed portrait of Brando as Don Vito looking down like a presiding deity, and, less reverently, a sculpture of a horse’s head stage left. The film’s director and its star reminisced about the making of an American (and Italian American) classic, joined by James Caan (Sonny Corleone), Diane Keaton (Kay Adams Corleone), Robert Duvall (Tom Hagen), Talia Shire (Connie Corleone) and Robert De Niro (the young Vito Corleone of “II”).

And though it might seem cruel or tacky to note how four-plus decades have altered the appearances of the former Young Turk director and his then-youthful and middle-aged cast…well, I’ll just say I’m sure everyone who watched the event was doing the same. Coppola has become a white-bearded seventy-eight-year-old with an alarmingly large belly. Pacino, at 77, sports a haystack hairdo that suggests a cross between Bobby Rydell and Keith Richards. Caan, who was the volatile, virile Sonny Corleone, now is a somewhat addled alterkocker who twice called Coppola a “Mediterranean Italian” (“I’m a Long Island Italian!” the director retorted). De Niro, at seventy-three, is silver-haired and clean-shaven, and at Radio City, was typically taciturn. Duvall, the oldest of the crew, is well-preserved at eighty-six. The two women have fared the best: Shire was glamorous in a long black and gray patterned coat over black sweater and pants; Keaton, her long hair now silver, wore a black turtleneck sweater bedecked with chains and crosses, and a billowing, belted skirt.

The evening’s host was film director Taylor Hackford, thrilled to be there “to moderate tonight’s discussion with the original creators.” Hackford began by noting that although Paramount had bought Mario Puzo’s novel as a film property, the studio, burned by the “Brotherhood” bomb, wanted to make a “cheap, dirty, and quick” adaptation. Coppola said that when he first heard about the novel, he was intrigued, but when he read it he found it a “potboiler” that devoted an inordinate number of pages to “Lucy Mancini’s anatomy.” (Mancini, Sonny Corleone’s mistress, was described – repeatedly—as having an oversized vagina.) Coppola also acknowledged cast members who are no longer alive—Brando, of course, but also John Cazale, so poignant as hapless Fredo Corleone; Al Lettieri, as sinister Virgil “the Turk” Sollozzo; Richard Castellano, as Peter “take the cannoli” Clemenza; and Salvatore Corsitti as Amerigo Bonasera, who delivered the memorable line that opens the film, “I believe in America. America has made my fortune.”

There was a lot of talk about auditions. Pacino, whom Paramount chief Bob Evans thought was too short to play Michael Corleone (the studio actually considered Robert Redford and Ryan O’Neal), auditioned repeatedly — “countless” times, he said. “It seemed like I was always testing. I kept testing after I got the part.” Coppola recalled calling Pacino after he’d already auditioned six times to ask him to try out one more time, and his girlfriend got on the phone to yell at Coppola, “What are you doing to him? You’re torturing him!” Pacino said he was willing to step aside —”I said, please Francis, it’s OK, we’ll work again. But he insisted, ‘No! I want you!'” Coppola added that Paramount executives changed their minds after seeing Pacino in “Panic in Needle Park,” which confirmed to them “his power” as a film actor.

Marlon Brando also auditioned, at the demand of Paramount, because the studio regarded the then-forty-seven-year-old actor as box office poison. Coppola didn’t tell Brando that he’d have to test for the part of Vito Corleone; instead, he suggested that they improvise a bit—on camera—to develop the character of the Mafia boss. When the director arrived at Brando’s home to shoot the screen test, the actor had long blond hair and was wearing a Japanese robe. He subsequently rolled up his hair, darkened it with shoe polish, and began to try out facial expressions and accents. Coppola showed the screen test to Charles Bluhdorn — the irascible Viennese who headed Gulf and Western, Paramount’s parent corporation— but didn’t tell him whom he was watching until it was over. Brando’s audition, said Coppola, was “what did the trick,” convincing Bluhdorn that Brando should be Don Corleone. At Radio City, however, Coppola didn’t bring up Bluhdorn’s astonished reaction to Brando’s screen test: “Vhat are ve watching? Who is dis old guinea?”

Some other memorable moments from the “Godfather” reunion:

One thing that no one mentioned at Radio City was the controversy over “The Godfather” and ethnic stereotyping. Paramount thought that hiring an Italian American director and screenwriter for the film, as well as Italian American actors, would forestall protests. This turned out to be mistaken notion, as the protests did come, the largest organized by the Italian American Civil Rights League, headed by Joe Colombo, himself a reputed mobster. In 1970, the League held a rally in Madison Square Garden to stop production of the film. League members sent a form letter denouncing the book and the movie-to-be to every elected official in the federal government. The League wasn’t the only aggrieved organization. The Sons of Italy weighed in against “The Godfather,” as did other groups representing Italian American business people and professionals. The backlash didn’t end in the ’70s. In 1997, a book, Beyond the Godfather, featured essays by twenty-three Italian American writers purporting to document “the real Italian American experience.” 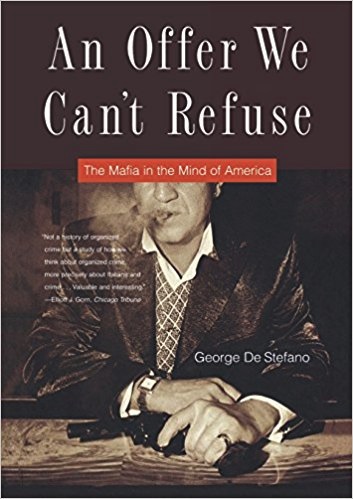 I wrote about my own reaction to the movie in my book, An Offer We Can’t Refuse: The Mafia in the Mind of America. When I first saw it,

…the last thing I expected was to see myself. But, as would be true of so many Italian Americans, I felt an immediate shock of recognition as I watched Coppola’s Corleones. These were the most Italian Italians I’d ever seen in an American movie…I knew these people, and their world. At Connie Corleone’s wedding, the guests lustily sang “La Luna mezzu’ mari,” the bawdy Sicilian ditty familiar to me from wedding receptions I’d been to as a child. (The old Sicilian man who led the song even made the requisite suggestive hand gestures to accompany the verses about the fisherman who comes to his innamorata with his “fish” in his hand, the butcher with his “sausage” in his hand, etc.). Among the guests were paesani who could have been my relatives: old women with corsages pinned to their heavy bosoms, and somber, reserved old men. Men who were loud gavones and others who maintained a proud reserve and dignity. And the noisy kids running around everywhere, indulged by the adults…. “The Godfather” was, in other words, drenched in italianità.

This, of course, was the reason so many Italian Americans loved, and still love, “The Godfather,” anti-defamationists notwithstanding. They—we—also love it for the same reason so many non-Italians do: the first two installments are superbly written, directed, and acted films that have lost none of their power forty-odd years later. You can argue about the effect “The Godfather,” and the many subsequent Mafia movies, have had on the image and reputation of Italian Americans. But you can’t deny that Coppola and his collaborators made one of the greatest American films, a masterpiece equal to— and dare I say, even better than? —that much-lauded movie about a ruthless Anglo-Saxon businessman and his empire that another young auteur named Orson Welles made thirty years earlier. Charles Foster Kane was a newspaper magnate, Vito Corleone an olive oil importer (that’s how he started, anyway). But “The Godfather” and “Citizen Kane” both told disturbing truths about America, capitalism, and the evil powerful men do.