Dionisio Cimarelli: From China to New York, With Art

Identified as the heir of Matteo Ricci, a famous Jesuit and Italian Sinologue, Dionisio Cimarelli arrives in China at the age of 21 by Trans-Siberian railway. He discovers a different country, in unrest, that is on the threshold of an economic boom. As a child, only museums managed to appease him. For Dioniso Cimarelli, famous sculptor and artist from Jesi in the Marche region, art has always been an totalizing experience.

First a sculpture diploma from Carrara’s Academy then his European experiences, like that at the Louvre, where he is drawn to classical art. Then he arrives in China in 2004 where he remains for nine years. His style, unique, characteristic, bringing together Western technique with aesthetic Chinese elements.

Today he lives in New York where he teaches sculpture at the New York Academy of Arts and is thinking about creating a retrospective in the Big Apple. He believes in art as a means for human survival and universal communication. Curiosity gives birth to his works. As does research, travel and the nature that surrounds him.

Why did you chose mainly sculpture as your art form and when did you realize that art was going to be a part of your life with such totality?

“My passion for art started as a young boy, when my parents would take me to the museum, a place that would appease me very much. When I was 14, I decided to enroll at the art institute, motivated by my attraction and passion to art and my great drawing skills. I would have chosen painting but a friend suggested sculpture. I quickly developed a passion for it. A major milestone was leaving the Marche region for the Academy in Carrara. That was my impact on the world. From there, my desire to travel, discover the world, get to know other cultures took hold.”

Cosmopolitan and global, you traveled the world before coming to America where you live today. China however represented another important milestone. What is the difference between China in your day and today?

“I visited China for the first time in 1986, arriving there on the mythic Trans-Siberian. I was 21 years old and I had left after completing my thesis for graduation. The China of that time was not yet open to tourism and the cultural revolution had destroyed part of its artistic heritage. It was a different country: full of bikes, no traffic, a developing nation. Chinese art in that period was a reflection of Soviet art, an art that belonged to socialism politics. All the artists would study at the Academy in Moscow and then return to their native land. All that energy, that air of change, had greatly excited me. So I decided to return to China in 2004. This time I stayed 9 years and lived a beautiful experience, both personal and professional, alongside Chinese culture. 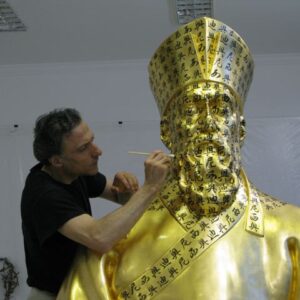 During the economic boom, from 2005 to 2010, China was also in full cultural boom. Galleries came to be, contaminated by Western art. Academically, there is still present in China classic Soviet art, but contemporary artists allowed themselves to be contaminated by Western art. And there too, aligned to economic expansion, arte became a business.”

What do Italy and China have in common?

“Italy is the nation in the west with cultural ties closest to China. An Italian would never feel out of his element in China. There are many things common to both countries: the meaning of family, traditions, sitting down to do business together especially after having established a friendly relationship. Not surprisingly that in China the two most famous historical figures from the West are Italian: Marco Polo and Matteo Ricci. My experience in China was for me important. The impact was great, definitely not easy but it changed my life.” 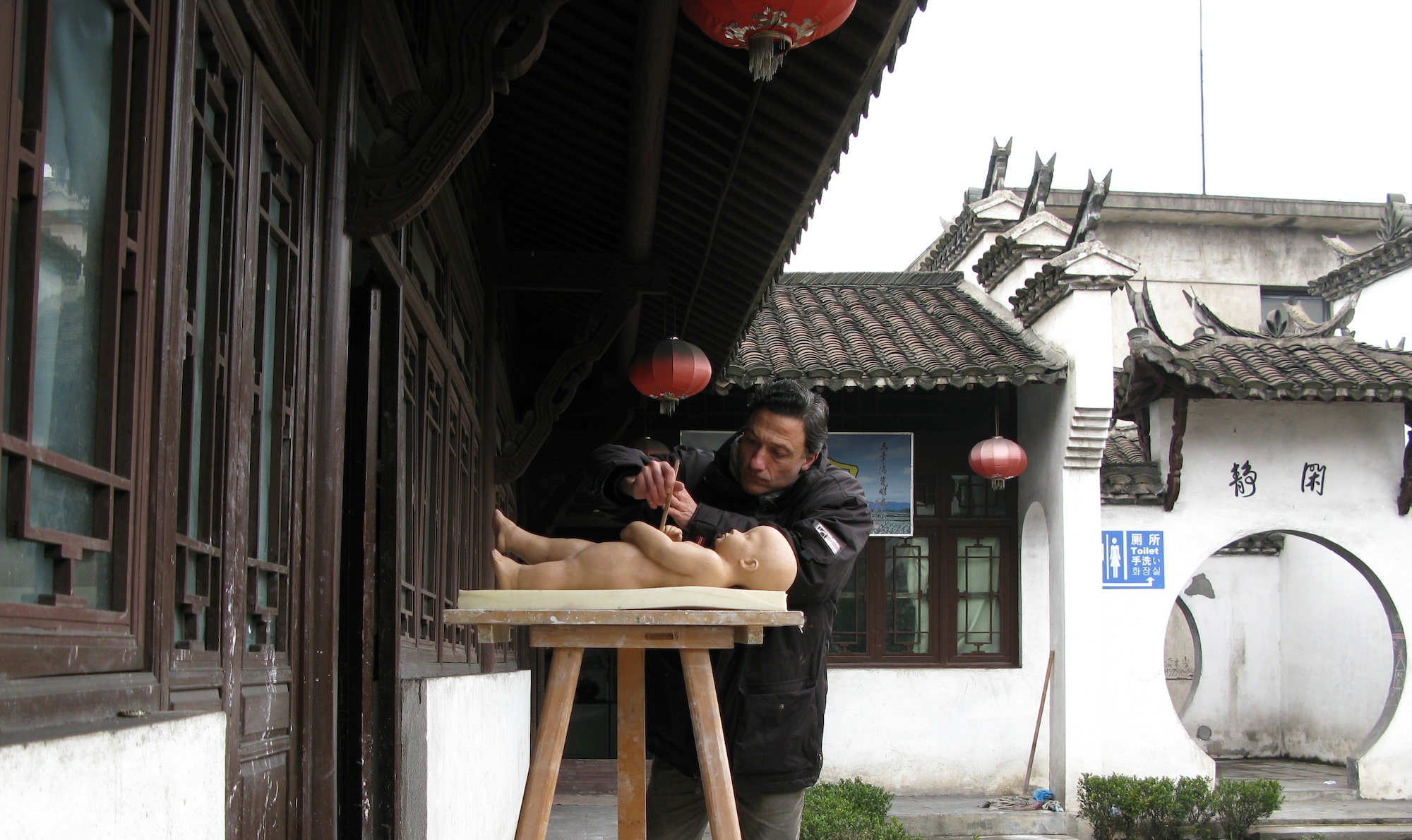 Because of your knowledge of China, you have been identified as the heir of Matteo Ricci, who like you, comes from the Marche region.

“Like Matteo Ricci, I too went to China to get in touch with a new culture, to get to know it, to have a cultural exchange, not to impose my culture on them. I always sought to dialogue, to discuss. My art is contaminated with aesthetic elements of Chinese art but my technique is Italian, from the West.”

First it was Surrealism, then Realism. How did your art evolve and how does it continue to evolve today?

“Initially I was interested in Surrealism as aesthetic and as a concept. During my restoration experience at the Louvre, I was drawn to classical art and to examine in depth the figurative exploration of art. I started from scratch and since then my art is always dictated by exploration, by artistic contamination, by the places where I live.”

So now you live in the U.S. What are your thoughts on art in the U.S. and in particular in New York. Do you believe that it is still a center of the art world and a fundamental experience for artists?

“Absolutely yes, because New York gives you a global vision on everthing. I can’t think of another city that even compares or is able to compete with New York. Certainly, art and its perception have changed here too because there has been an identity crisis in Western society that inevitably is reflected in art. But there is also much to learn from the United States. In Italy, the birthplace of the Patron State, today art is suffering from an economic crisis. In America instead there are private patrons who often finance artists, exactly in the way Italy does with the patron state. Sure, this could have negative effectives but at least there is a stir, it creates artistic excitement.”

Let’s talk now about the state of Italian art.

“An artistic nation that is unable to express its talents. I struggled in Italy and had to leave to be able to express myself and be recognized as an artist. The same thing of my friends and colleagues. What’s lacking is artistic exploration, we live on our laurels. Surely there are many talented artists, because Italy is a nation of creative people but, from an academic point of view, the artistic Italy needs to be reformed since this work is not seen as a profession but a hobby. In America it’s different even in academia. Figurative art, conceptual art is studied. In Italian academia, there is confusion at the didactic level.”

What inspires your work? Where do your sculptures come from?

“From what is around me, from what I see, from nature. From the countries I have experienced. From my travels, I always seek to discover something, to be on a quest for something.”

Let’s talk about your region, Le Marche. What are some of the places that you hold dear and where do you return to today?

“My family, the places of my childhood. I like to be surrounded by art the beauty of nature, landscapes, food. I love my country, my region, but I wouldn’t be able to live there at this moment. I have always felt restricted there.”

Today you’re a New Yorker. What do you love about the Big Apple?

“The energy, it’s vitality. I try to be open to options, to learn, to work on my next artistic project. For now I enjoy teaching, a very beautiful chapter of my life.”

Let’s turn back to China and its contemporary artists. In a recent interview Ai Weiwei recently inaugurated a show here in New York, among which we find his exhibit on migrants. What do you think of his work?

“He’s an artist of our times, a sort of show man that I respect whose style but I don’t share. The Western political arena contributed to his notoriety. I don’t like art that has a political goal.”

What value do you assign to art?

“It’s an extraordinary medium to express what goes beyond race and religion. Art is important for mankind’s survival and to elevate mankind and humanity. I believe that art is a medium for self-expression in our world. I don’t believe in the political role of art.”