Favio Chavez: “The World sends us garbage, we send back music”

“Landfill Harmonic”, an award-winning documentary, tells the story of the Recycled Orchestra of Cateura, a Paraguayan musical group that uses instruments made entirely out of garbage.

This is the bare bones description of the film. But this wonderfully shot, edited, and heartfelt story is about so much more. It’s about how music can transform lives; it’s about achieving your dreams; and it’s about hope.

Most of the people in the town of Cateura are “gaucheros”, or trash-pickers. They sift through the 1500 tons of garbage that is dumped in their back yard every day, scrounging for anything they can sell – 15 cents a pound for aluminum cans, 8 cents a pound for glass bottles. Most of them thought their children would do the same.

But Favio Chavez, an environmental technician, changed all of that. His initial mission was to make people aware of the environmental issues in the area. When that evoked no reaction, he decided to use music as a way to get through to them. He took over an old building, put up a sign and invited the local kids to take music lessons and join his orchestra.

Without money to buy instruments, they had to rely on imagination and ingenuity. With the help of a local carpenter named Cola, they began to create instruments out of whatever could be salvaged from the mounds of garbage around them: an x-ray film became a drum head; an oil can, the base of a cello; and a size 12 heel from a woman’s shoe, a tuning peg. Eventually the orchestra came to life.

The evolution of the film itself was almost as unlikely as that of the orchestra. It started with the idea of making a documentary about underserved children in Paraguay, Executive Producer Alejandra Amarilla’s home country. But after a trip to the area in 2009, the focus changed. On the last day there, the producers met Favio Chavez and fell in love with his story.

Finding the kids for the film proved more difficult. The producers went from house to house, family to family explaining the importance of their film. They first had to gain their trust; and then they had to keep it, year after year as the shooting went on and on; and as the kids grew up. As the film goes on, we learn more about their families and their lives, their hopes and aspirations. And we are privy to some wonderfully intimate moments, like when Tania says, “without my music, my life would be meaningless.” 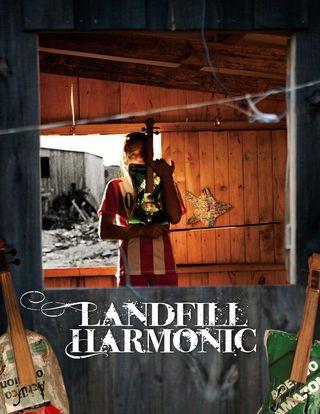 All in all, the production took almost 5 years to complete, with the filmmakers returning to Paraguay every year, and sometimes twice a year. In 2013, when the film had already been edited, a devastating flood inundated Paraguay and the landfill: 43,000 families were displaced, there were 214,000 refugees, and many members of the orchestra were flooded out of their homes. The filmmakers decided to go back to Paraguay and continue filming. The townspeople didn’t “get it”, especially those who didn’t know where they’d be sleeping the next day. But Favio pushed everyone to keep going. As he so eloquently put it, “our strength is our unity.” These sequences give the film an extra dimension, as well as a sense of the fragility of life.

There are currently 25 kids in the orchestra and almost 300 kids registered in the music school. Thursday night, the orchestra played at the United Nations. For Juliana Penaranda–Loftus, producer and co-director, it’s all a bit of a miracle. “This is like a modern fairy tale; there is magic behind it. Magical things happened for the filmmakers and the kids.”

“Landfill Harmonic” is also storytelling at its best.

“Landfill Harmonic” opens theatrically in New York City on September 9th and in Los Angeles on September 23rd. On Tuesday night, September 13,The Recycled Orchestra of Cateura will perform at the Avalon Theater in Washington DC. Joining the orchestra for a post screening discussion with be director Graham Townsley, co-director/producer Juliana Peñaranda-Loftus, co-producer Jorge Maldonado and the orchestra director Favio Chavez.

Watch the trailer of “Landfill Harmonic”: