Based on a true story, it’s a taut historical drama that plays like a political thriller

Whenever I hear or read about a new Holocaust-related film, I think, “Just how many more of these stories can there be?  How many times can this topic be revisited and rehashed?”  If the film surprises, enlightens, and moves people, the answer is “keep em coming”. The People Vs. Fritz Bauer is one of those films.

Based on a true story, it’s a taut historical drama that plays like a political thriller. The lead character, Fritz Bauer, is an Attorney General in Germany who is determined to bring the crimes of the Nazi regime to light; and to a German court of law.  He is on the trail of the infamous Adolf Eichmann (responsible for the mass deportation of thousands of Jews to concentration camps), who is allegedly hiding out in Buenos Aires. But the time is 1957, so it is a difficult task, especially in a country that doesn’t want to deal with its sensitive past; and whose many business and political leaders are former National Socialists, ie. Nazis. 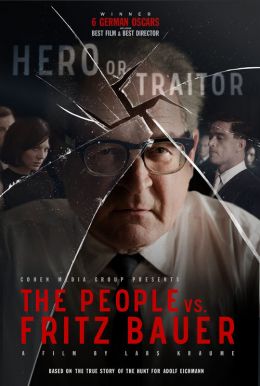 Complicating matters is an ambitious and wily Senior State Attorney who would like nothing better than to see Bauer dismissed. Bauer is a Jew and a Socialist.  Worse yet, there are intimations that he is also a homosexual, a punishable crime under Paragraph 175 of the German Civil Code.  Bauer’s protégé and biggest supporter, State Attorney Karl Angermann, has his own secrets, which play a major part in the drama. Rumors of an alleged suicide attempt, death threats, and Bauer’s connection with the Mossad are a few of the other elements that add to the intrigue.

But what really makes this film come alive is the acting, which is superb. Burghart Klaussner as the title character is riveting, with his iron will, intense stare, and ever-present cigarette between his fingers. And Ronald Zehrfeld as young Karl is exquisite.  He alternates between being sensitive and loyal; confused and careless.  And you can read it all on his face.

The lighting and camera work are also stunning.  The look is like a sepia painting, but the mood is all hard edges and paranoia, giving the film a “cold war” feel.  There are also some small, lovely touches, which give the story a note of sensitivity; like the striped socks that we see originally in an ad in the newspaper, then on the feet of Andermann, and finally, near the end of the film, on Bauer’s feet.

It’s certainly not giving away anything to say that Fritz Bauer’s efforts ultimately resulted in the capture of Eichmann, and his trial and hanging in 1962. Unfortunately, it was not until 10 years after his death that his work was recognized. But what may be Bauer’s greatest achievement was West Germany’s famous Auschwitz trials, which began in Frankfurt in 1963, when 22 Nazi SS henchmen faced justice for the first time in Germany.

The People Vs. Fritz Bauer will be released in the U.S. August 19th.

Watch the official trailer of  The People Vs. Fritz Bauer:

Primomiglio: Raising a 50 Million Fund to Back Italian Startups