Stories of Abortion in Missouri

In 1973, the U.S. Supreme Court decision in Roe v. Wade gave every woman the right to have an abortion. But 43 years later, that fight is still being fought. Since 2011, more than half the states in the nation have significantly restricted access to abortions. In  Missouri, only one abortion clinic remains open; patients and their doctors must navigate a 72-hour waiting period; and each year sees more restrictions.

Filmmaker and Missouri native, Tracy Droz Tragos, sheds new light on this contentious subject with a measured and even-handed HBO documentary that focuses on the people these laws impact, not the lawmakers, and not the politicians.  In her Abortion: Stories Women Tell we hear personal stories from the women it effects most – young women, poor women, the abortion providers, the nurses, the guards who watch over the one clinic left in the state, and even those on the sidelines hoping to sway their decisions.

Tragos spent months finding and talking with these women who, she says, feel a sense of disenfranchisement. “They are often overlooked. They are without access to birth control and even human rights”. And, amazingly enough, Tragos discovered, Sex Education is largely absent in Missouri.  It has become a culture of not talking, stigma, and shame. 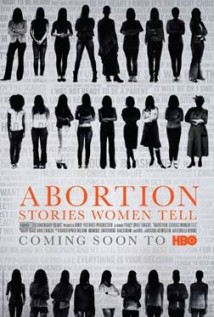 But the film is not a polemic. Rather, it’s a heartfelt and thoughtful examination of a very complex subject, in which we all become a part of the conversation. The women interviewed come from different walks of life and have different stories to tell about how and why they decided to have an abortion (or not); and the soul-searching that went into the final decision.

One young woman has a severely deformed fetus that doctors know will never come to term; another has no husband, 2 kids and works 90 hours a week to support them; and then there is the abortion doctor herself, who is about to give birth to a child.

In stunning counterpoint to these women are the men and women who stand outside the clinic carrying signs and shouting deterrents like, “Dads and Moms, come out of this place. This is a place of murders;” and the lone woman who says, “I can’t believe I’m a citizen of a country that says it’s ok to kill babies.”  To the filmmaker’s credit, not one of these people is demonized. Instead, they are given a chance to voice their opinions, something that Tragos sees all too infrequently among the marginalized and poor in Missouri.

But there is a larger walk-away message, says the director, a mother of two young daughters. She wants to encourage more sharing of stories, so women do not feel alone. She wants to get beyond politics.  And, as she so eloquently put it, “This is not an issue of pro-choice but pro-voice.”

Since this film was made, there have been new developments in the abortion fight. In June of this year, the Supreme Court struck down a Texas law that imposed strict regulations on abortion doctors and facilities, saying it violated a woman’s constitutional right to obtain an abortion.  How this will ultimately impact other states is yet to be seen.

Abortion: Stories Women Tell will come to American theaters August 12th and will air on HBO in 2017.