Giorgio Morandi and the Art of the Ordinary

Somber earth-tones, dramatic brush strokes, thick layers of paint, a quiet, gentle stillness… these are some of the terms that come to mind when describing Giorgio Morandi’s contemplative paintings, a selection of which are on view at the Center for Italian Modern Art until June 25th, 2016.

The Italian modernist artist was born in 1890 in Bologna, Italy. He is known for having been a bit of a hermit, a reputation that historians have most likely exaggerated. Living in a small, cramped apartment with his three sisters he simply chose to maintain a low-key public profile throughout his life. Cubism and Futurism were on the rise during the years in which Morandi was developing his artistic practice, but the artist decidedly isolated himself from the modernist painterly movements of the time. “Morandi was seen as a very traditional painter that renovated the traditions of the Renaissance masters. He was not understood as a master of contemporary art,” explained Laura Mattioli, Founder and President of CIMA, at the press preview for the exhibition. Despite his soft-spoken nature, he became a prominent and highly admired contender in Italy’s modern art scene.

This isn’t the first time Morandi’s work has been exhibited in New York. In 2008 the Metropolitan Museum of Art presented Giorgio Morandi, 1890-1964. Featuring 110 paintings, watercolors, and etchings by the artist, the massive retrospective spanned the entirety of Morandi’s artistic career and allowed the visitor to trace the fluctuations in his practice from beginning to end.

CIMA’s exhibition, which features about 40 paintings, etchings, and drawings, is unique in that it focuses mainly on Morandi’s canvases from the 1930’s. “It’s the first time we’re able to see such a large group of his works from the 1930’s in the United States. No one has ever gotten to see this union before,” said Vivien Greene, Senior Curator at the Guggenheim and a member of CIMA’s Advisory Committee.

Curiously, the works from this period of the artist’s oeuvre have been studied the least, but it is the decade in which he fortified his artistic practice. In order to give some context to his work, the curators of the show also included a few select pieces from the 1920’s, the 1950’s, and from the years before his death in 1964. Despite the fact that CIMA’s exhibition is smaller than the MET’s, it is by no means any less effective in capturing and delivering the essence of Morandi’s artistic process. On the contrary, the limited selection of works on view in the show was carefully selected to emphasize the way in which Morandi’s practice developed over the decades.

One of the highlights of the exhibition includes Morandi’s unsettling Self-Portrait (1930) that for decades was believed to have been lost. (Morandi destroyed much of his work from his “juvenile” years.) It was recently discovered on the back of a different painting titled Cactus (1917). His eyes are vacant as he stares threateningly at the viewer; the portrait is haunting. For the most part, however, his masterpieces were not inspired by people or landscapes, but by funnels, tin cans, silk flowers, pitchers, cups, and bowls. Made in all shapes and sizes, each object has a personality of it’s own. “The still lifes in his paintings are like characters. The yellow bottle in Still Life (1931), it’s like an actress coming out [on stage] to take a bow,” said Mattioli.

Why did he choose these inanimate objects as his muse? Well, for one, it was practical. Morandi was poor and so he made use of the simple, cheap objects that surrounded him. Furthermore, focusing on such subjects allowed him to concentrate on his formal artistic technique rather than on portraying a sentiment. “It is a natural subject, a way to be free to paint without love, without emotion. Most of the avant-garde artists [such as] Picasso, etc., painted in this way,” explained Mattioli.

The exhibition also demonstrates that there is something to be said about the setting in which an artwork is presented to the public. Often times, visitors viewing an exhibition at a museum are not only overwhelmed by the quantity of works on view, but also by the throngs of visitors that they must compete with in order to get a decent view of the featured work. Their experience can feel chaotic, rushed, and impersonal. The intimate space of CIMA, on the other hand, allows the visitor to feel as if they’ve entered into the tranquil sanctuary of a friend’s apartment. The gallery is comprised of exposed brick walls, hardwood floors, a kitchen, and some couches arranged around a fireplace. You’ll even be offered an espresso before your one-hour guided tour, led by one of the very knowledgeable CIMA fellows. Quiet, cozy, and naturally lit, it is a lovely space that encourages the visitor to spend time examining and appreciating the artwork displayed on the walls. The setting invites the visitor to get up close and personal with Morandi’s paintings, beckoning him/her to take in the somber earth-tones of the works, notice the masterfully painted films of dust that ever-so-slightly coat the surfaces of the still life objects that star in his paintings, and revel in the thick layers of paint that characterize each canvas. 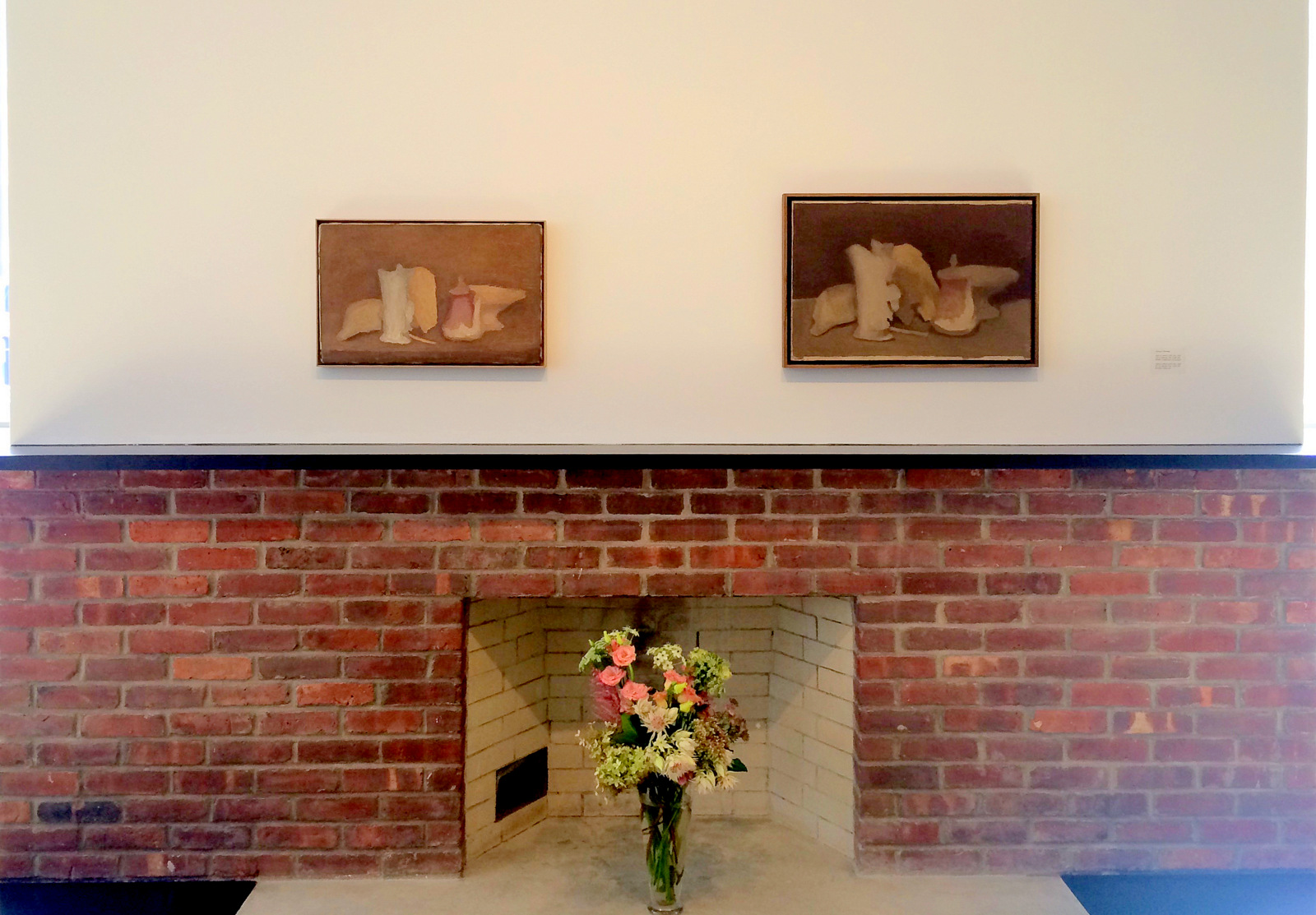 It seems fitting that an exhibition featuring Morandi’s masterpieces would be on view in an apartment-like setting, since they were originally created in the cluttered corners of the artist’s own apartment. Most of the paintings in the exhibition are on loan from the private collections of Augusto Giovanardi and Laura Mattioli’s father, Gianni, both of whom were friends and patrons of Giorgio Morandi. Mrs. Mattioli recalls visiting the artist’s studio when she was a young girl. “It was shocking to me, the little space he was working in. I grew up in a house that was very clean, very bourgeois… [his studio] was so dusty!” she shared.

She wasn’t the only one to notice the marked surfaces of Morandi’s workspace and living-quarters. The exhibition also features a series of black-and-white film stills from a video in which artist Tacita Deans recorded the scuffed surfaces of Morandi’s apartment. Circles and lines fill the photographs creating a sort of map; they are the marks that he would draw to indicate the placement of each still-life object that he was painting.

Additionally, CIMA paired Morandi’s paintings with the work of three other contemporary artists, none of them painters. American photographer Joel Meyerowitz returned to Morandi’s studio in Bologna and created 270 portraits of the objects that the artist used in his paintings. An assortment of his photographs, vivid in color and printed in a large-scale format, appear in the exhibition, offering an interesting compliment to the somewhat dampened colors of Morandi’s paintings. Also on view is Matthia Schaller’s Morandi’s Palette, which is a photograph of a colorfully dappled palette of paint. Finally, Wolfgang Laib’s sculpture titled Schiff, made of honeybee wax, sits prominently in the gallery. Its soft texture subtly mirrors the coatings of thick paint that Morandi layered on to his rich canvases.

CIMA, founded in 2013, is a non-profit exhibition and research organization located in downtown Manhattan that is devoted to the promotion and study of Italian 20th century art. Each year the center organizes and displays a yearlong exhibition focusing on a different master of Italian modern art. Past seasons were dedicated to the works of Fortunato Depero and Medardo Rosso. While this year’s focus is on Giorgio Morandi, the center has also recently announced that the 2016-17 season will be dedicated to the work of Giorgio de Chirico and Giulio Paolini.