I’m culture editor of the monthly print magazine Inside the Vatican. In the May 2015 issue I published an interview with Monsignor Pasquale Iacobone, the Holy See’s Special Delegate for Expo, the World’s Fair with a food theme hosted in Milan from May 1 to October 31, 2015. To my question, “Has the Holy See taken a stand against Coca Cola and McDonald’s being Expo’s two most important sponsors?,” he answered: “Not directly, because we couldn’t interfere in the Italian Government’s organization of Expo. However, The Holy See is taking part in an anti-obesity campaign during Expo by sponsoring a conference at Bambin Gesù (Rome’s Vatican-owned Children Hospital’s) on children’s dangerous health threats caused by over-consumption of fast foods: especially diabetes and obesity. Among the frightening statistics we’ll report, for example, is: In spite of its Mediterranean diet, Italy now has the most serious childhood obesity problems in Europe. This conference will show The Holy See’s disapproval of McDonald’s and the danger of obesity and diabetes from its fast-food products.”

And yet, in spite of Pope Francis’s frequent exhortations to end world hunger, food waste, and post-deforestation slash-and-burn agriculture, which afterwards is ideal for producing soybeans used by fast-food chains to fatten their chickens and cows, just recently The Holy See seems to have taken a contradictory stance when it welcomed McDonald’s into its fold, like a Prodigal Son, with no reprimand from His Holiness.

I first heard that McDonald’s might open a franchise just off St. Peter’s Square in an article by Marco Tosatti published in Turin’s newspaper, La Stampa, on May 26, 2016. Many local residents and members of the clergy were enraged staging protest rallies and writing letters to Pope Francis to stop this act of blasphemy. In an interview with the Italian newspaper La Repubblica, Cardinal Elio Sgreccia, who retired as the president of the Pontifical Academy for Life, called McDonald’s then only potential arrival “a disgrace” and said “it’s a controversial, perverse decision to say the least.”

All seemed to fall on deaf ears. His Holiness has made no statement, perhaps because, according to Tosatti, Cardinal Domenico Calcagno, President of the Administration of the Patrimony of the Apostolic See (APSA), is a close friend and frequent dinner guest of Bergoglio’s at Casa Santa Marta, Vatican City’s guest house where Pope Francis resides instead of his much fancier official papal apartments.

So in October, with no official opposition, Calcagno signed a lease with McDonald’s to open a franchise just outside of Bernini’s Colonnade, in Piazza della Città Leonina, in the Vatican-owned building, where Cardinal Ratzinger lived for 25 years before he became Pope Benedict XVI. Today the tenant in his apartment is another German cardinal, Gerhard Ludwig Mueller, Ratzinger’s successor as the Prefect for the Congregation of the Faith, the Vatican office responsible for overseeing church orthodoxy. Two other tenants of the building are Chile’s and Egypt’s Embassies to The Holy See.

On December 30, (ironically the same day that posters announcing the opening on January 12 of the film “Founder” about Ray Kroc and his McDonald’s success story began appearing on Roman billboards), the latest of the some 40,000 of the controversial fast-food giant’s venues worldwide quietly opened for business without fanfare and with subdued decoration on its façade. The usual bright yellow arches are missing, replaced by tiny versions in gold above the plate glass windows. The interior decoration in tones of beige and birch has the atmosphere of a new parish hall. Sadly if the decor has changed, the unhealthy menu hasn’t, though Thank the Good Lord it proclaims no Vatican-themed dishes. However, at all the three entrances is a holier-than-thou poster warning about the dangers of alcohol. On my several scouting trips, I discovered that the vast majority of clients are Japanese tourists and a smattering of Americans with only a few Italian families and the occasional nun or priest. I’ve been told it’s also a favorite stop of off-duty Swiss Guards, whose barracks are just across the street.

Even now that the restaurant has opened, Sgreccia hasn’t tempered his views. He continues to say that the new, 5,800-square foot location, open seven days a week (proving nothing is sacred) from 6:30 AM to 11 PM, is “abhorrent”. “It would be better to use those spaces,” he said, “to help the needy of the area, open spaces for hospitality, shelter and help for those who suffer as the Holy Father teaches,” to which Calcagno replied, “I don’t see the scandal.”
This is not the first time that McDonald’s has sparked outrage and faced opposition when trying to move into a venerable space in Italy. In November 2016 it sued the city of Florence for $20 million after leaders there blocked its efforts to open a location in Piazza del Duomo (Cathedral Square). “McDonald’s has the right to submit an application,” said the Mayor Dario Nardella, “but we also have the right to say no.”

In its own defense at this time of the Vatican venue McDonald’s issued the following statement: “As is the case whenever McDonald’s operates near historic sites anywhere in Italy, this restaurant has been fully adapted with respect to the historical environment. As always, McDonald’s meets or exceeds all national and local laws and policies related to business operations in this location.”

The space, which for decades housed a branch of the largest Italian bank Intesa San Paolo has long been vacant and it seems that McDonald’s outbid its competitors and will be paying 30,000 euros (around $31,000), the equivalent of 6,500 Big Macs, per month in rent, La Repubblica reported. “While this may sound hefty,” reports the website Eater.com, it’s a relative bargain: “McDonald’s likely pays $2,300 per square foot for its space in Times Square. And while Times Square hosts some 50 million visitors annually, the Vatican is no slouch when it comes to tourism either, with 7 million flocking to St. Peter’s Square each year.”

Opening day the Committee for the Protection of Borgo, made up of local residents and the consumer protection pressure group, CODACONS, filed an appeal with the Lazio Regional Administrative Court (TAR), which will have the last word, to suspend the authorization granted by the Municipality of Rome. The core of the appeal states that McDonald’s violates a resolution that forbids the transformation of locations that could be characterized by traditional cuisine into one of just “foreign cooking”. Not to mention that a McDonald’s will further and irreparably damage the cozy artisan atmosphere of the neighborhood, known as the Borghi, which has existed since the Renaissance but for the past decade has already been invaded by Chinese souvenir shops and Indian grocery stores pushing out the handicraft and Mom-and-Pop shops. 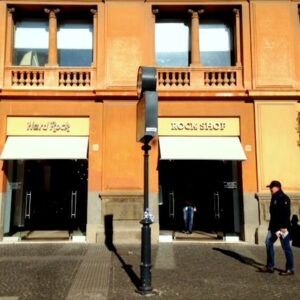 Both protest groups call the McDonald’s “a decisive blow to an already wounded animal.” They also point out that most serious of all is the unnecessary security risk of a McDonald’s so near to St. Peter’s. It’s a danger to its patrons, to the neighborhood, and to the Basilica of St. Peter’s, especially since there are another two McDonald’s and a Burger King only a short walk away.

Certainly even less appropriate for the neighborhood, however, is APSA’s lease in another Vatican-owned building, also home to the Brazilian and Argentine (yes I said Argentine) Embassies to the Holy See at Via della Conciliazione 22, the main boulevard leading from the Tiber to St. Peter’s Square. Here the tenant is “The Hard Rock Café,” which opened a month earlier than McDonald’s on November 26th. It replaced a religious bookstore. For now it serves no food and its products are marked “Hard Rock Café Rome”, but there’s lots of empty space behind the clothing racks for a restaurant and hands-down a “Hard Rock” The Vatican T-Shirt, a certain bestseller souvenir! If Pope Francis doesn’t, may God forbid!