ILICA Explores the Future of Millennials

Discussing the Present: Looking to the Future, a program of the Italian Language Inter-Cultural Alliance (ILICA) 12th Annual Cultural Event and Gala weekend, was hosted at Hunter College on October 28. Technology has triggered a change in how multiple professions think, operate, and do business. This demand for change opened a dialogue that contained the perspectives of various fields, including but not limited to educators, lawyers, entrepreneurs, musicians, and doctors provided insight into their respective fields. The bilingual contribution of the panelists from Italy and the United States provoked a discussion that provided much food for thought and concluded with Italian food made by Andrea Tiberi.

Many thoughts were shared at the event that originated from a different background. This expectation of the guest speakers was able to generate interest on what each speaker would say. Certain topics were anticipated and addressed at this event, yet a recurring theme shared the same seasoning in the delivery of these perspectives, and that seasoning each perspective on the present day from each sector represented was pessimism. Ivan De Martino, representative of the Italian healthcare system, described what surgeons undergo in their careers, and also captured the decision making process of an immigrant when they make it to the U.S.: “My answer to why I am here in the United States? I don’t know when I will be in Italy again, because I sensed that, like Isaac Newton says, ‘If I have seen further than others, it is by standing upon the shoulders of giants.’ In my field the giants are here in the United States. ⎼ he stated ⎼ I don’t know how many Nobel Prizes we have won in the last 25 years, and this is a huge problem. But I don’t have a solution.” De Martino is disappointed by Italy’s lack of opportunities for surgeons, and found himself having to choose to leave his home country to live where he would have opportunities to expand on his career. The result on his views on the topic didn’t reach an optimistic note, and didn’t really contain a solution he’d like to see occur in his field with the booming of technology.

The overall general sense of the speakers was rather bleak: there was a lack of hope and uncertainty and it was a common theme shared by each sector representative. On this point Michele Siracusano shared his visionary attitude when he spoke of his experience starting a trucking company in 2014, dealing with American bureaucracy: “They check an array of paperwork that we have to provide constantly, but God forbid if  they check if our facilities and our procedures are really safe: they don’t. I don’t have a solution, but I can tell you because I am a testimony that things have changed in the past 20 years in the United States as well. ⎼ he explained ⎼ So I have a question for all of you. Is the American Dream still here? Are things today really different in the United States than they are in Italy, or in any part of the world? Does globalization have anything to do with this?”

Leadership as such was seen at this event from the business perspective with a focus on the struggle of earning a dollar instead of the struggle of inventing tomorrow. Carolann Trotta spoke on her experience as a real estate agent and as an Italian teacher, and she expresses the following “when teaching students, it’s more philosophy based. The first thing they learn is ‘mi chiamo’, ‘mi chiamo’ is your name, it’s your identity, it’s where you come from, and where you’re going.” This is the key not many of the speakers took advantage of because in all of their respective fields this simple concept is applicable, yet they all seem to forget that at some point in their. 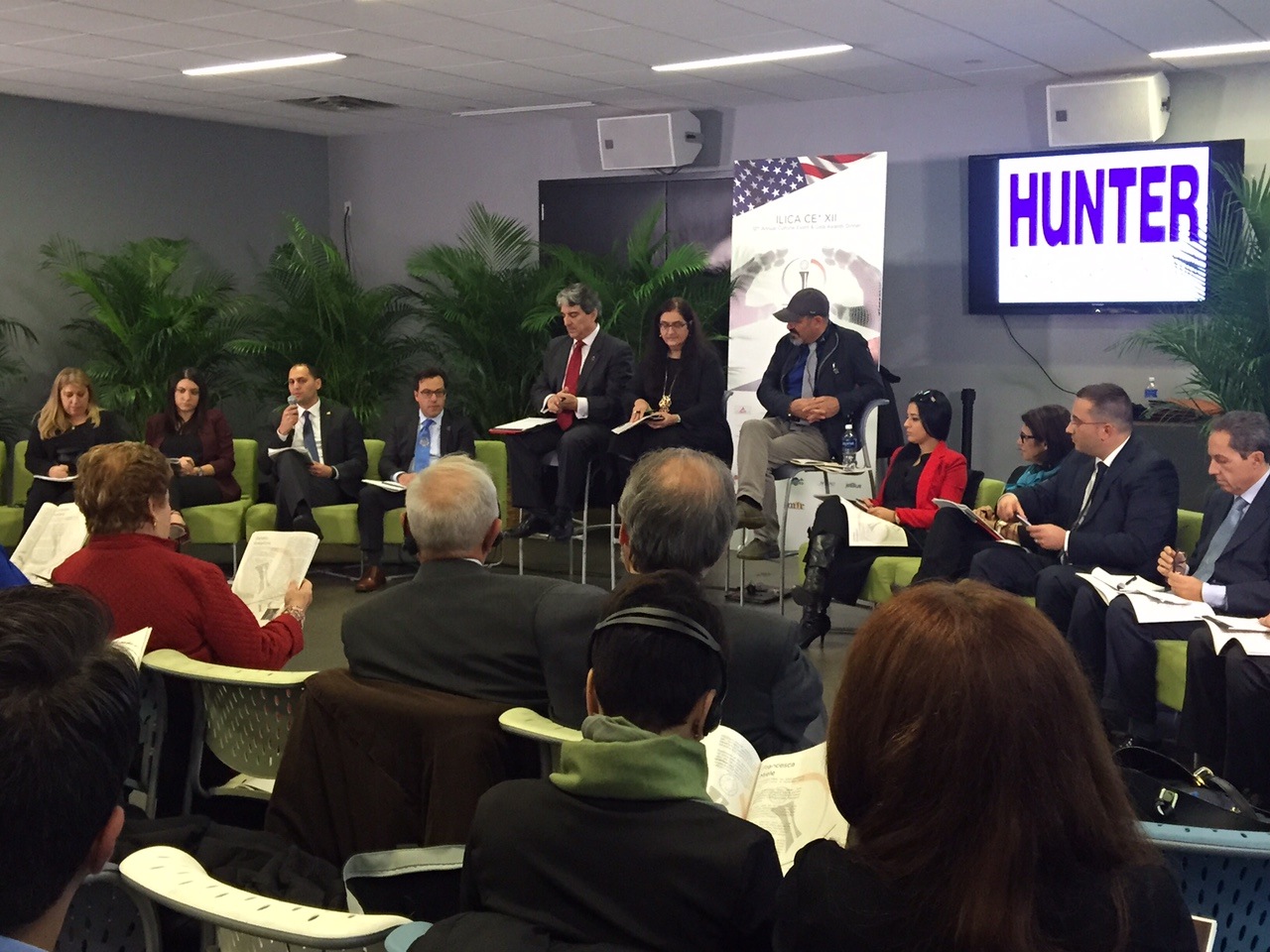 Pino Aprile had the advantage of being the final speaker and shared his thoughts on the issue, but first he decided to highlight the flaws in the previous speakers’ assessments of the future and challenged others to think more critically. Aprile commented: “We’ve come together today to talk about our own fields, so that each one of us could address solutions to the problems that we find in our business. The response that we heard over and over again is ‘I don’t have the answers.’ ⎼ he remarked ⎼ What is the thing we didn’t hear? It’s that each one of the speakers is working between two worlds that are not only Italy and the US but between a civilization that is dying and one that is being born…we are in a state in which one world is reaching the end of its cycle and another is just starting.”

The popular journalist challenged the views of the professionals around him, and made them realize how they’re part of the problem today. He pointed out that their contribution to the problem by emphasizing how their focus is very narrow and only captures the present while missing the future. “We even heard from Rossignoli who told us that his sector plans on a year-to-year basis. So what’s missing? Vision. The greatest visions to which humanity has given birth were birthed in the last millennium and died at the end of that millennium. What vision is there in this millennium that will provide us with a path to follow? There is no vision.” Aprile critiqued their lack of vision and leadership in their respective careers and revitalized the energy of the room.

As the focus turned to the solution for the issues introduced by other speakers, Aprile became the optimistic speaker for the audience. He delivered the solution to the audience with an inspirational tone that made other professionals in the room look within themselves. He provided them with a different perspective through which to view the industries in which they work, as well as inspire the students sitting in the audience and have them wonder how they will contribute to the societies they will lead: “What is the vision that is around what you do that will change the world? This is the question. Because if you’re a farmer in Apulia, you’re just a farmer in Apulia? If you’re a lawyer in New York, you’re just a lawyer in NY? No! Whoever does something is changing the world. If he knows it, he will do it. If he does not know it, he will remain within his  own confines and whatever he does, we won’t know. So then at what point will the world change? When people met up and decide to change it.”

Instead of questioning the status of the American Dream today, settling for uncertainty, and complaining about changes that get in the way of self-benefit, a true leader in 2016, like any other leader in history, must think about their contributions to future generations. Aprile concluded by implanting a consciousness in the minds of those gathered together: “There is a Sicilian saying: ‘You need faith to plant an olive tree.’ Faith because the fruit of the olive tree will be enjoyed by your grandchildren, so you have faith in the future. That olive tree will be the future of many generations. The question we should all ask ourselves is ‘Are we planting an olive tree or are we just making plans for this upcoming weekend?’”

Vincenzo Marra, chairman of ILICA, closed the program with these words: “We are still here promoting the language and culture of a pro-positive Italy in continual evolution, respecting traditions yet always looking towards the future ⎼ asserted Mara ⎼ ILICA continues to exist because, thanks to you, we continue to believe that the cultural evolution of a nation cannot be stopped by procession or a tradition to old to represent us.”

The ILICA program continued at Hunter College on Saturday, October 29 with the 12th Gala Awards Dinner. To be honored by founder and Chairman Vincenzo Marra and President Donna Chirico, were Daniel Nigro, the Fire Commissioner of New York (he was appointed as a firefighter in 1969, rising through the ranks to the top of the department on September 12, 2001); Matteo Fedeli, also known as “The Man of the Stradivari” who, with his very precious violin built in Cremona in the XVIII century, delighted guests playing wonderful music like “Fiddler on the roof” around the tables of ecstatic public; Giampaolo Cassese, agriculture entrepreneur from Grottaglie, Apulia, whose passion for environmental sustainability, made him develop his family farm as an entirely environmentally sustainable enterprise. In 2014, the Societa’ Agricola Fratelli Cassese was named among the most “environmentally sustainable” business in Italy; and finally NOIAW, the National Organization of Italian American Women, founded in 1980 under the leadership of Dr. Aileen Riotto Sirey.

Italy on the UN Security Council at a Time of Terror